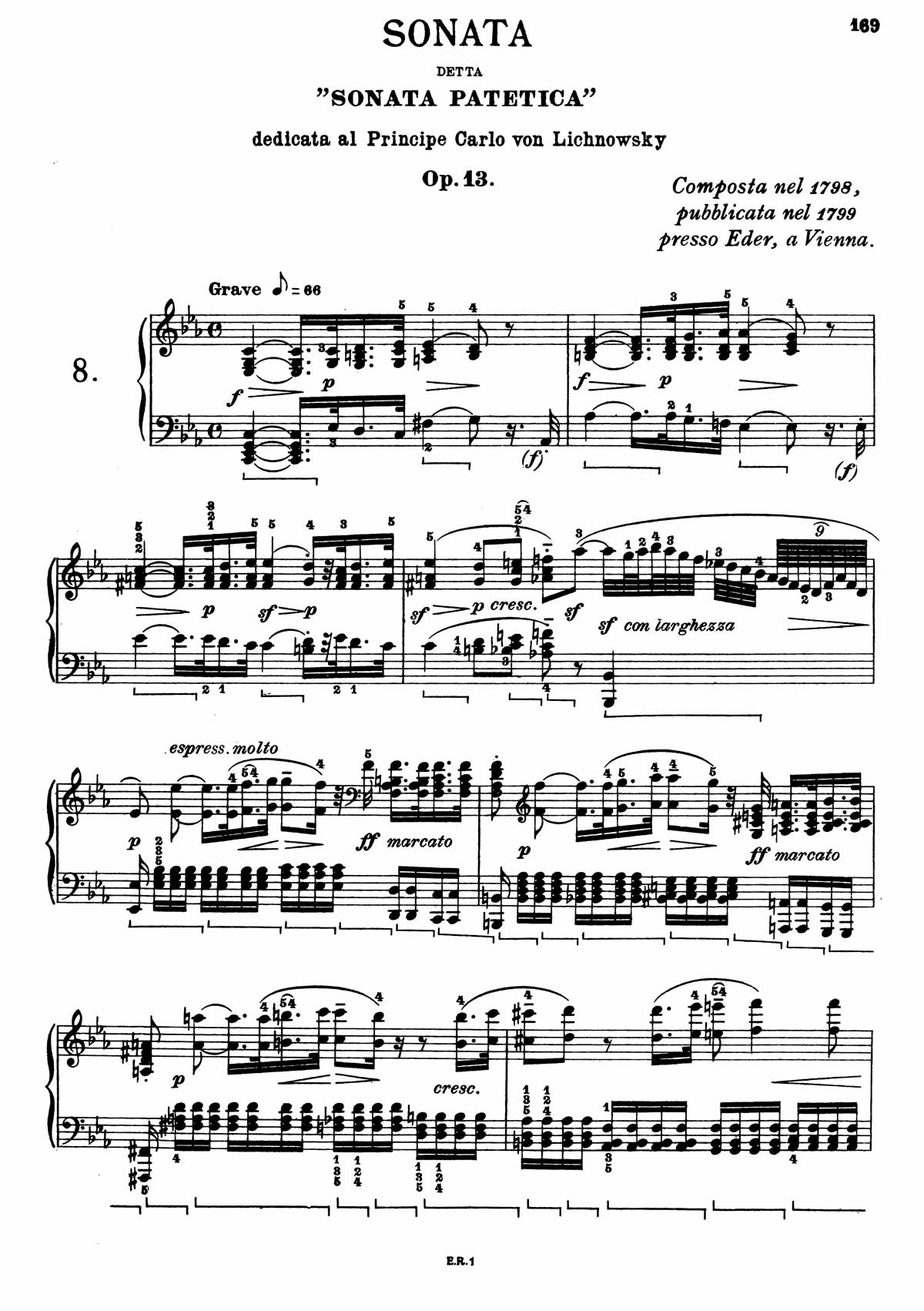 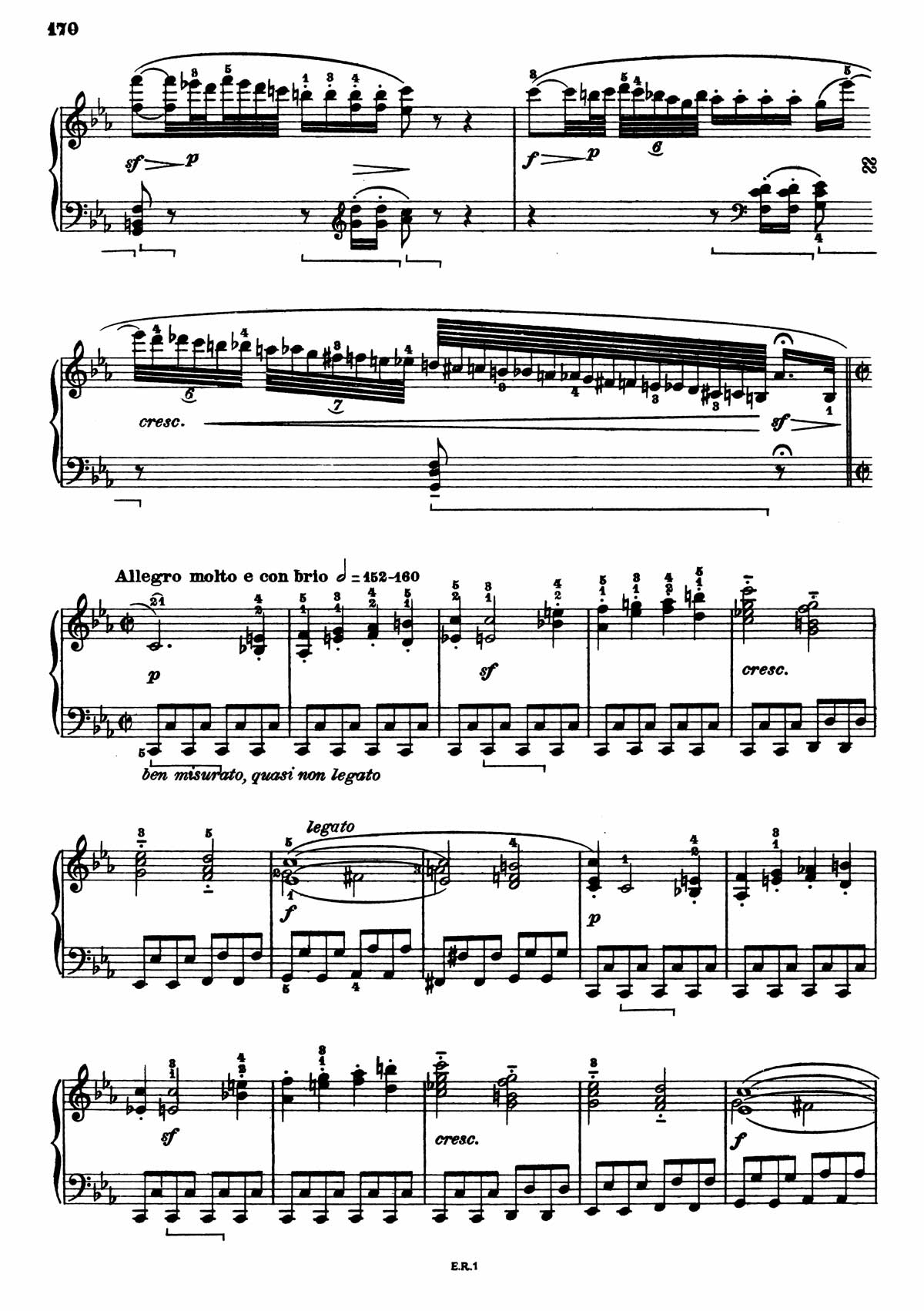 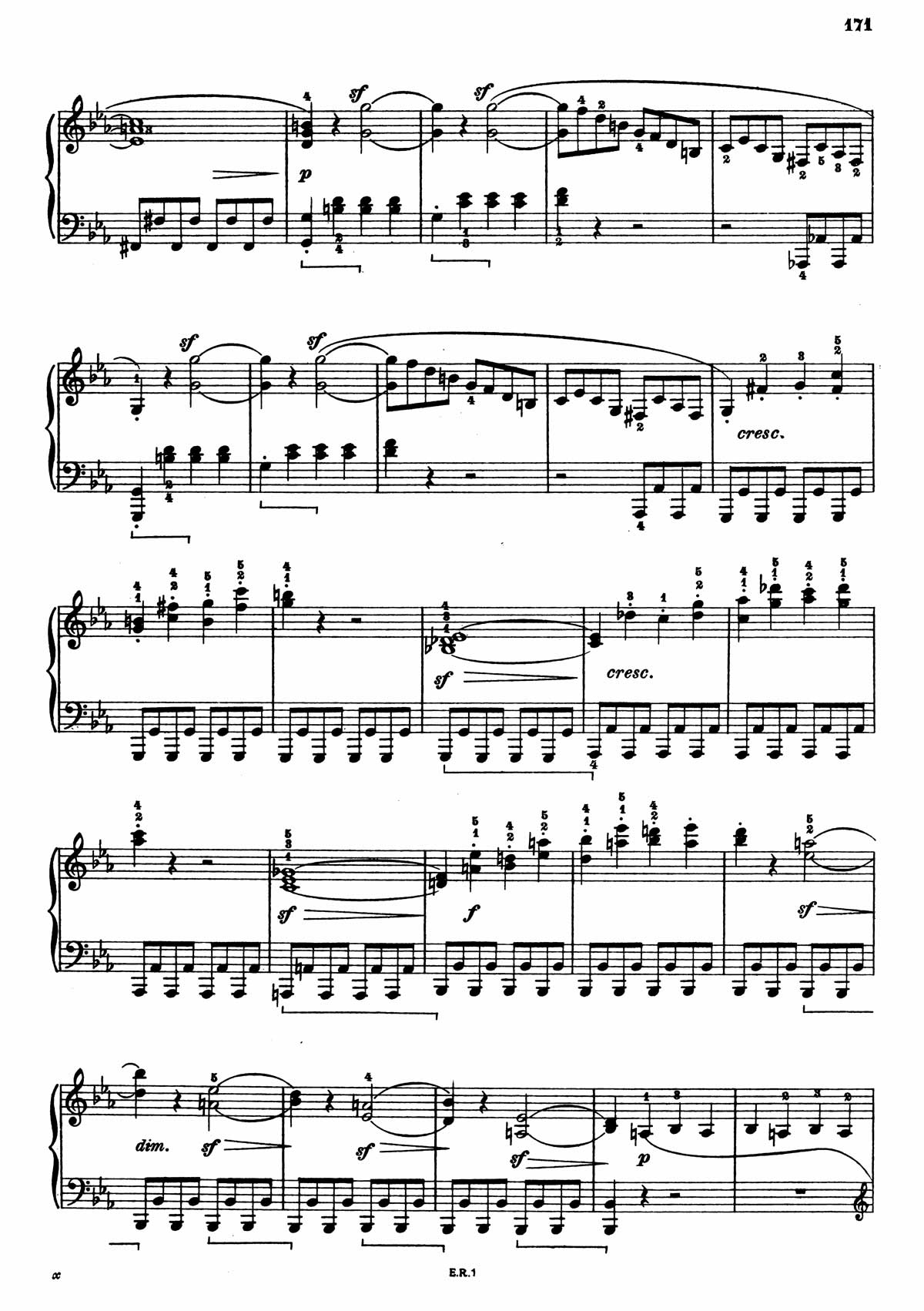 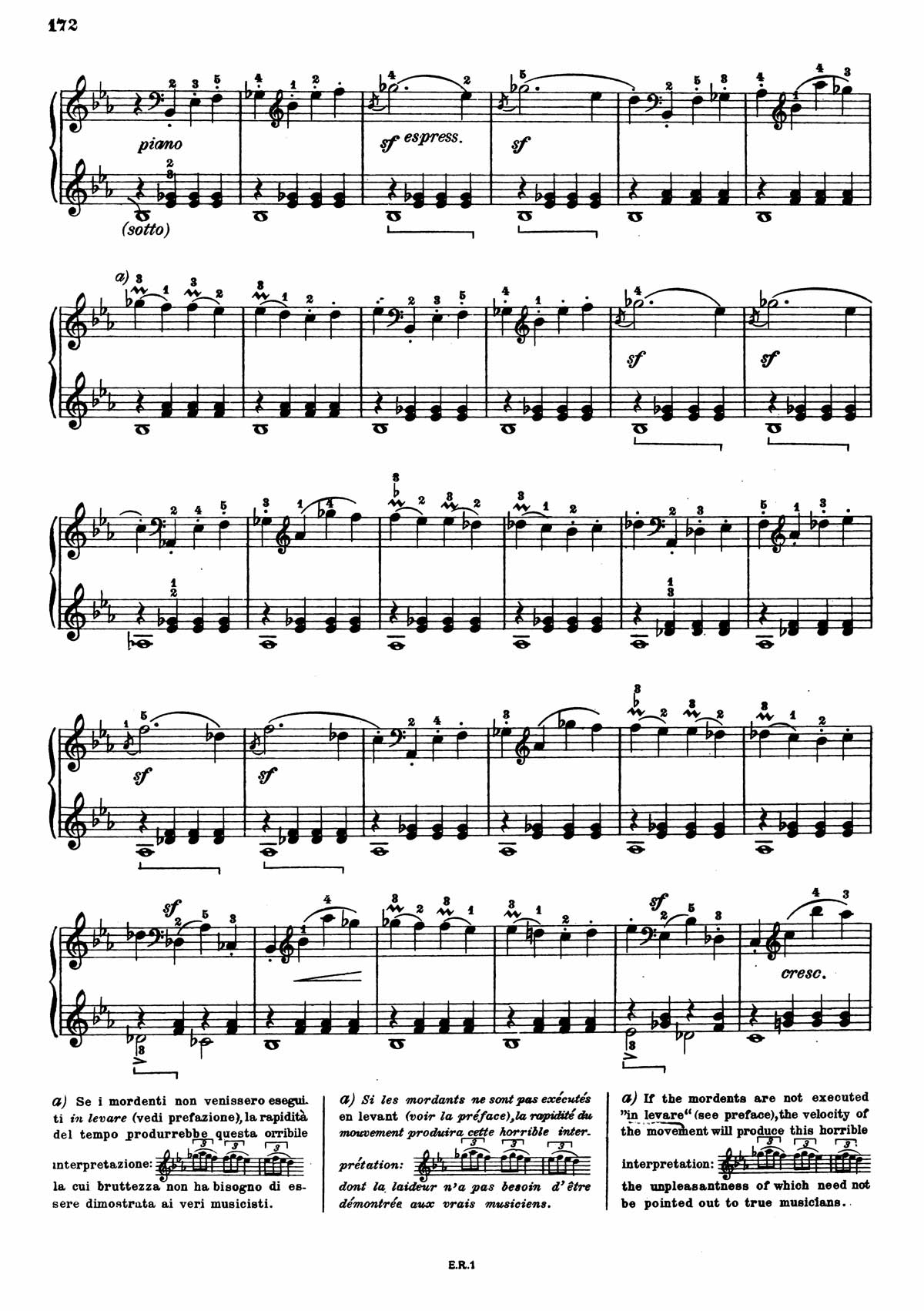 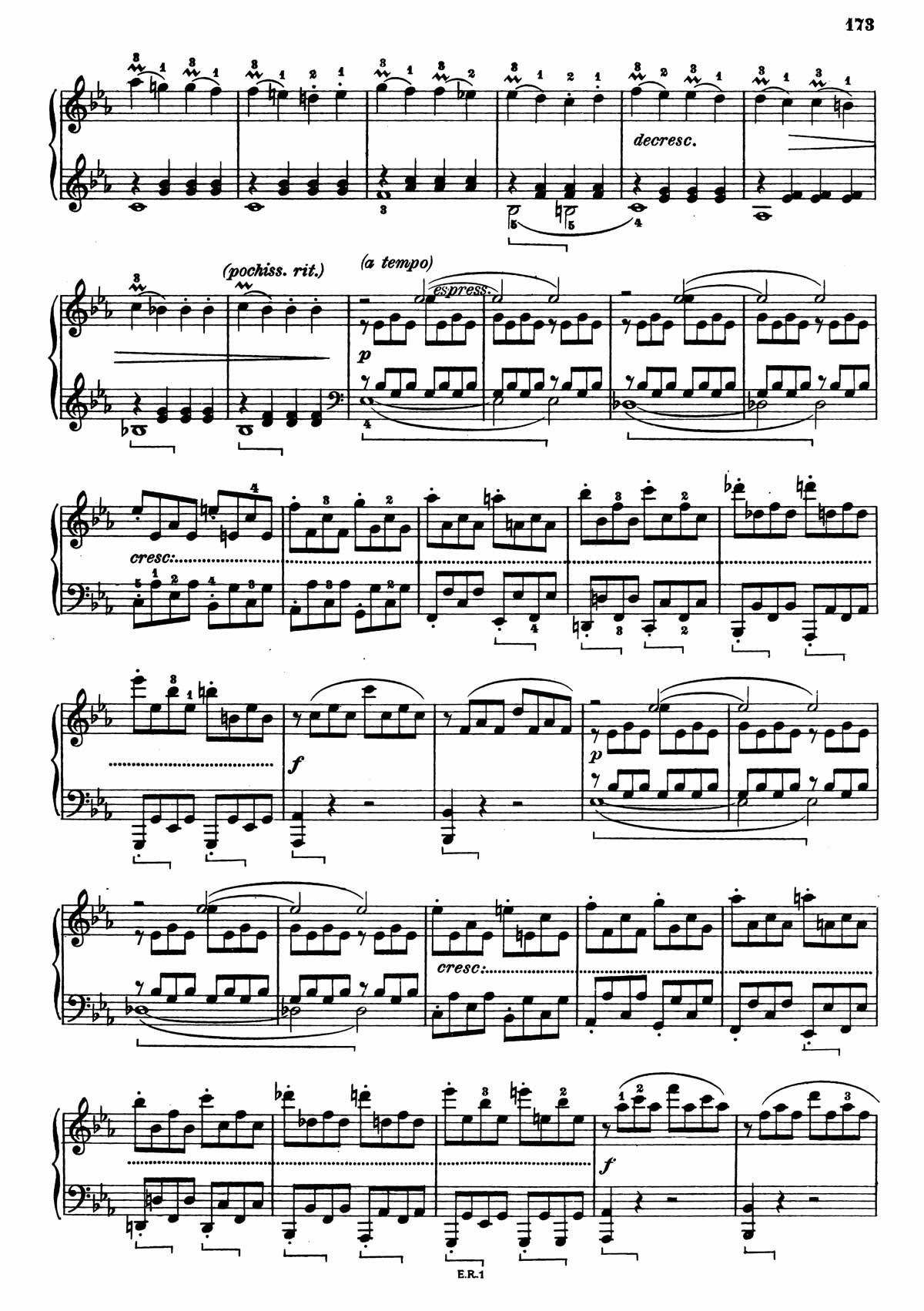 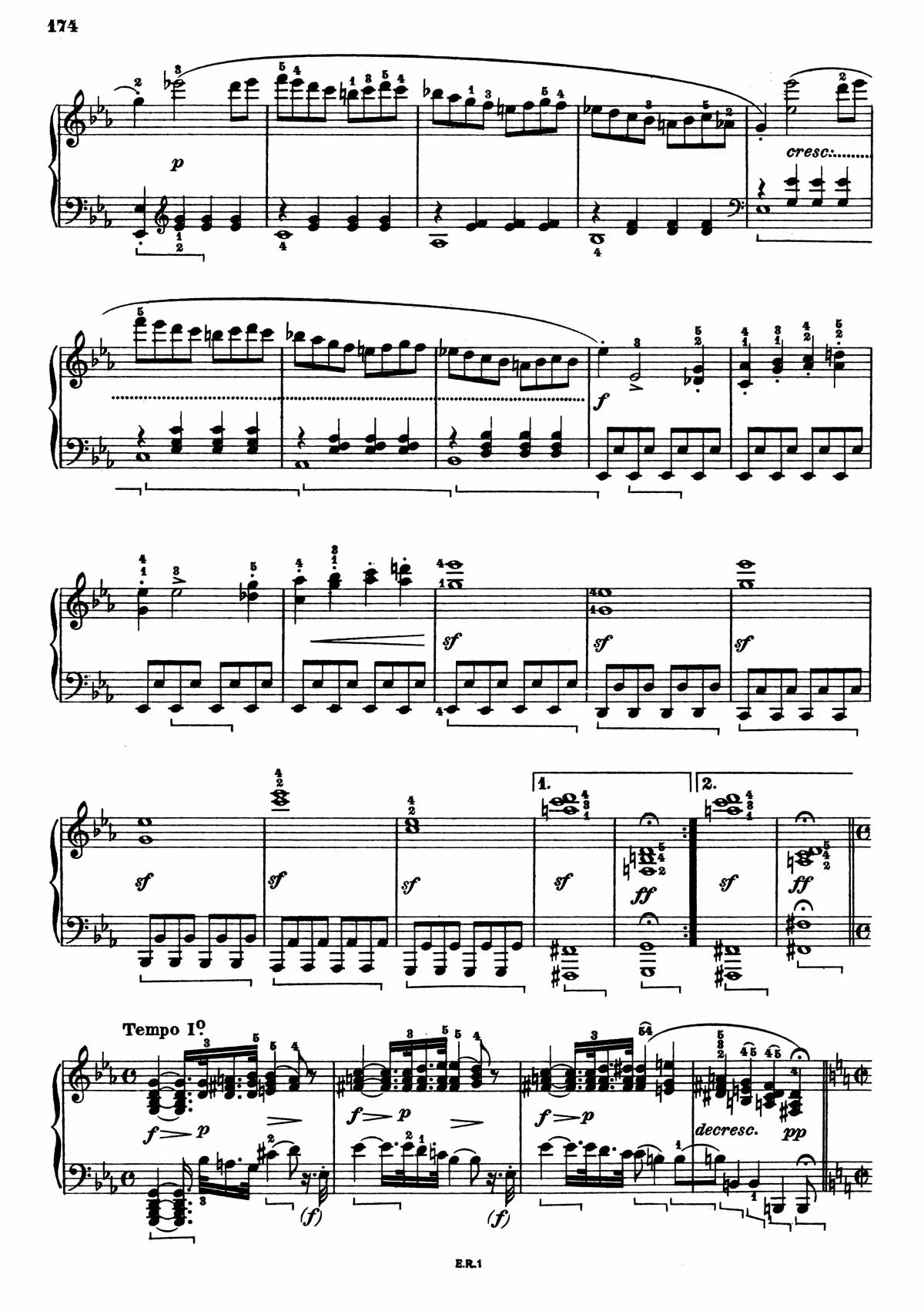 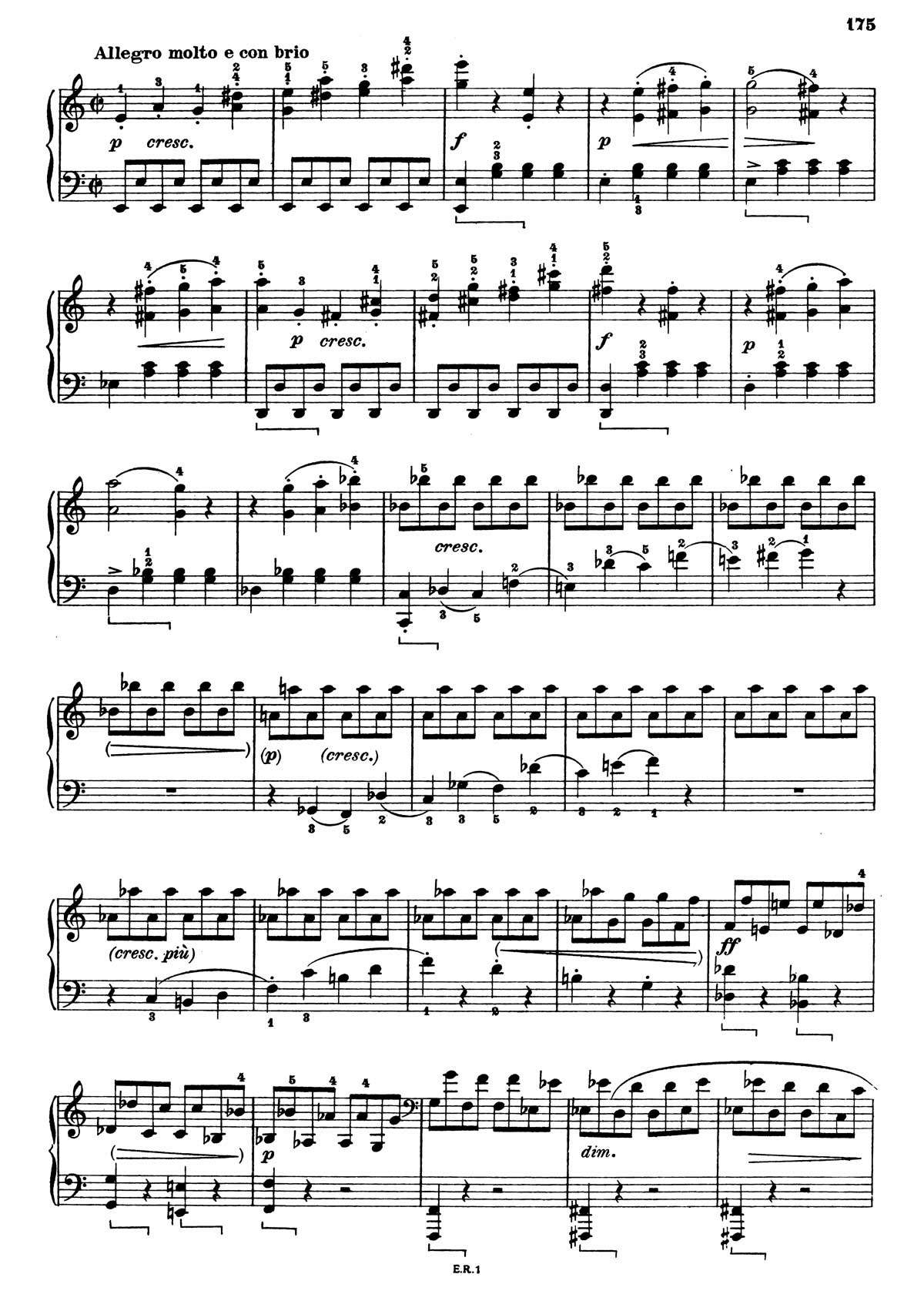 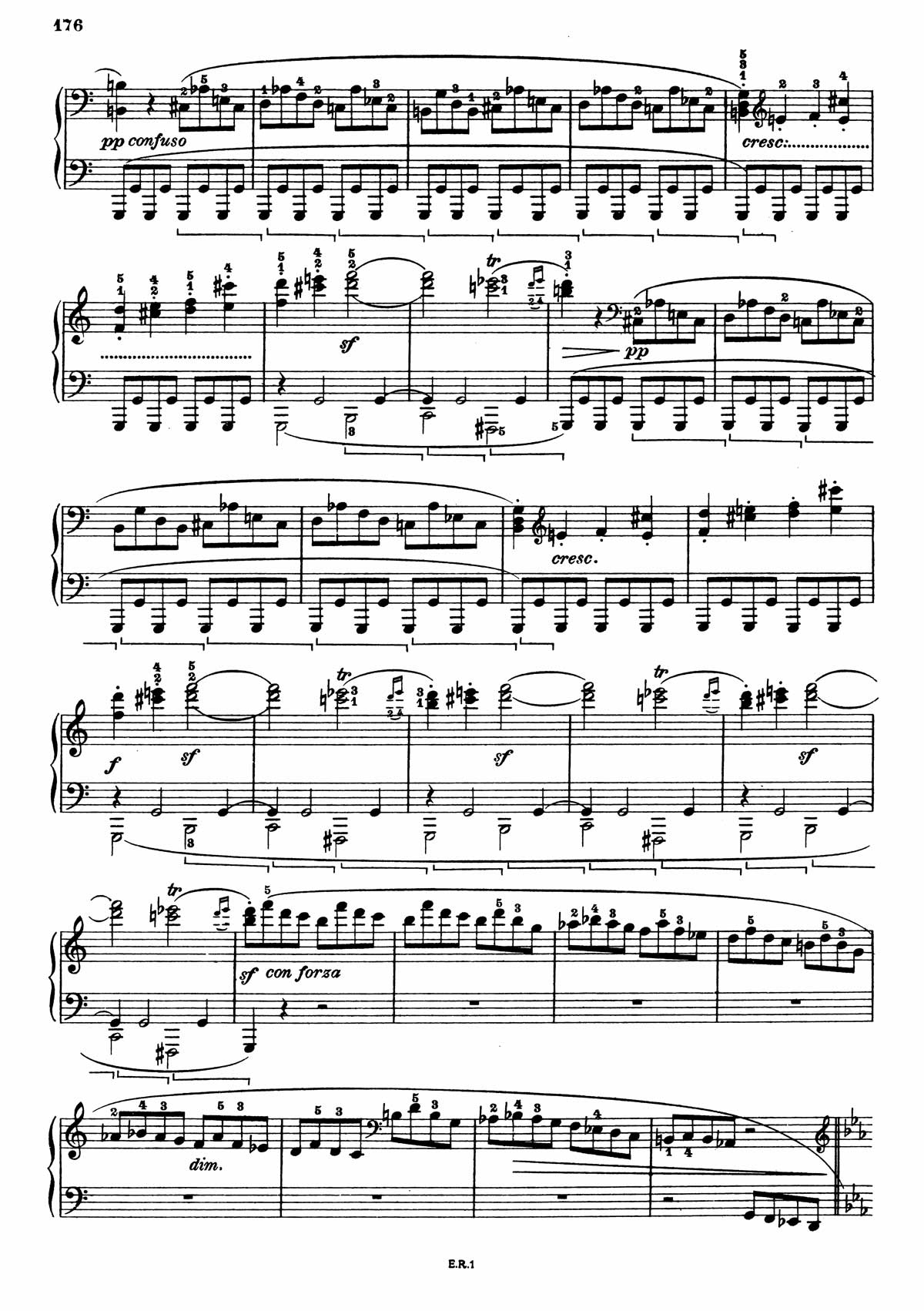 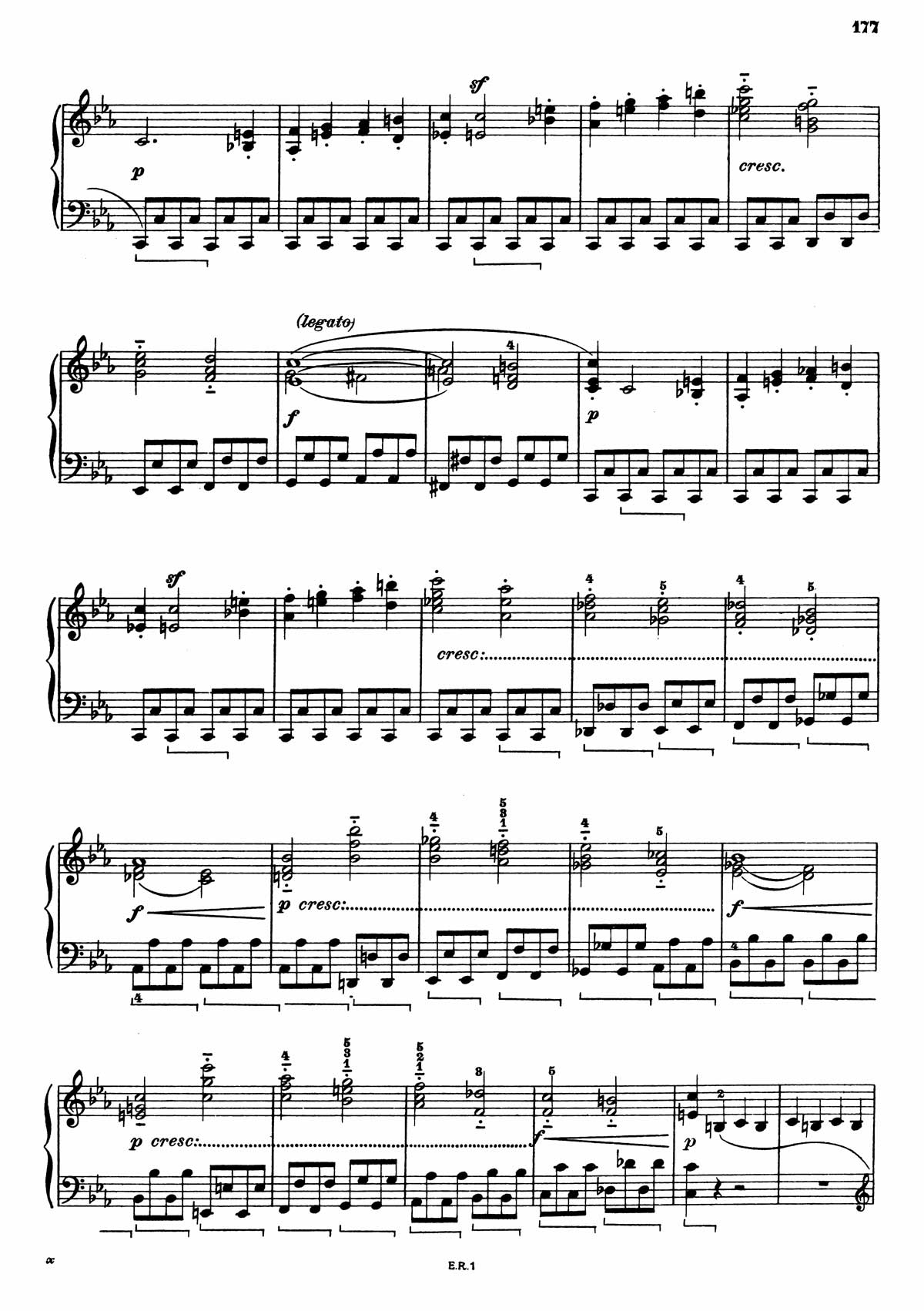 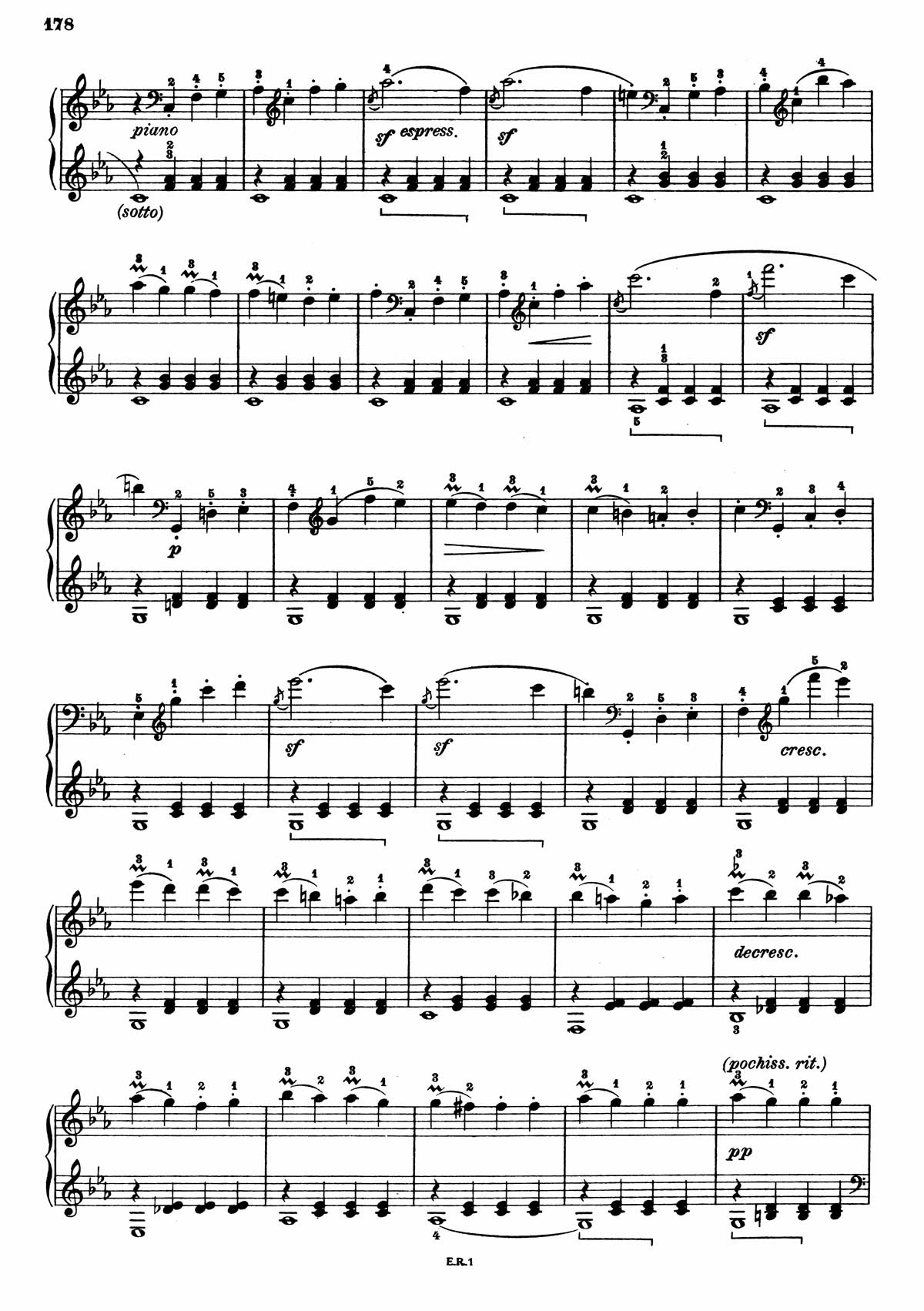 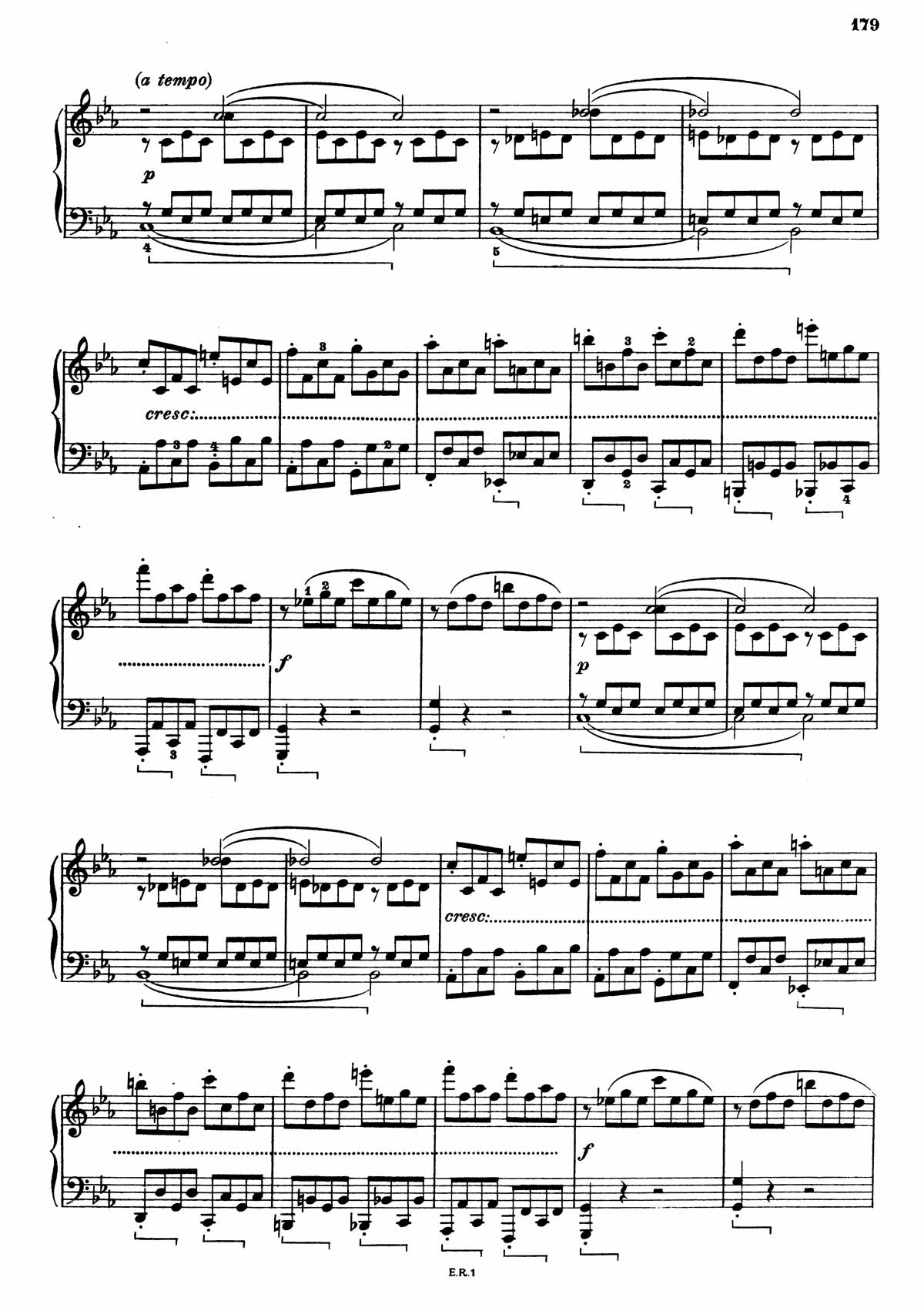 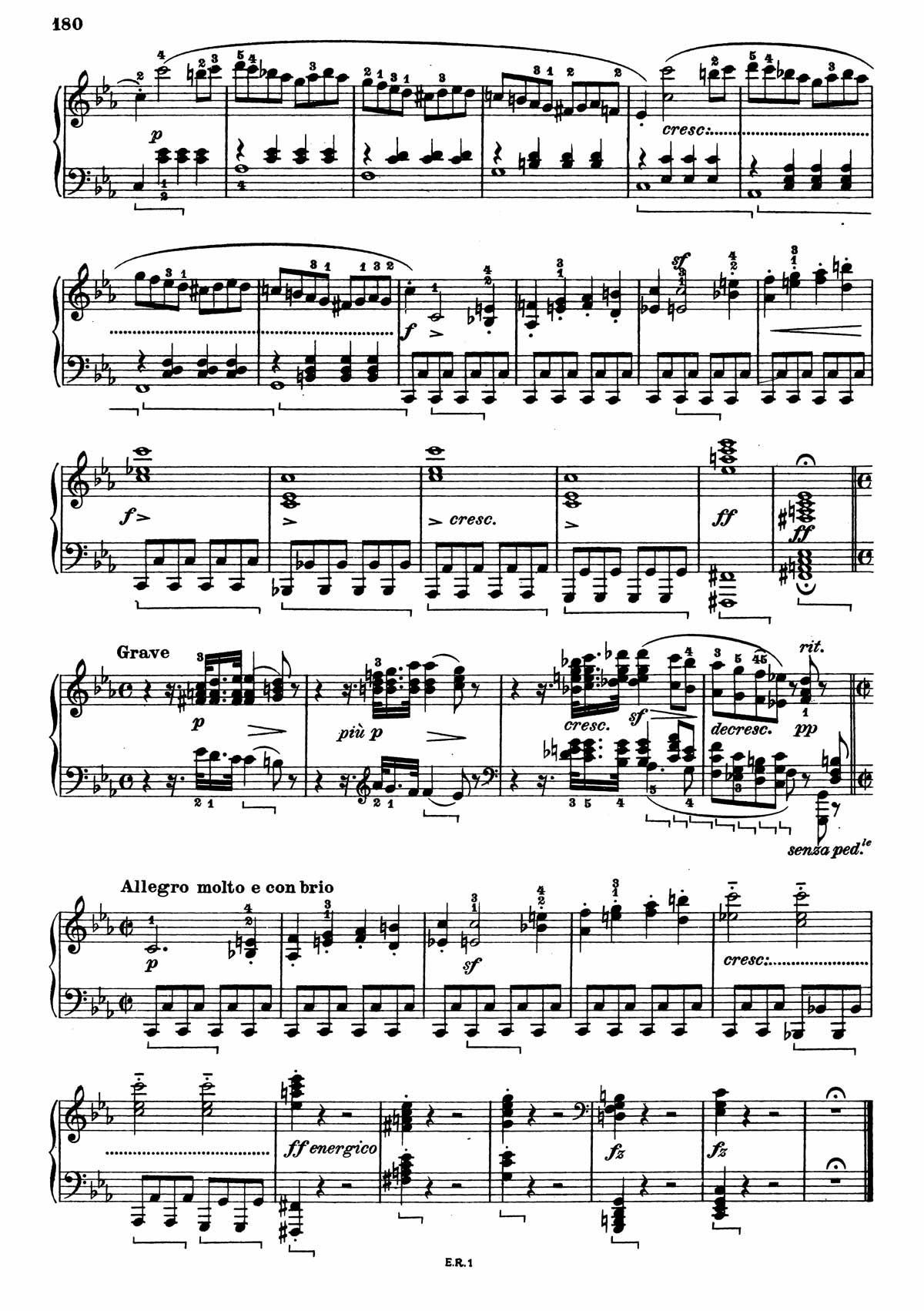 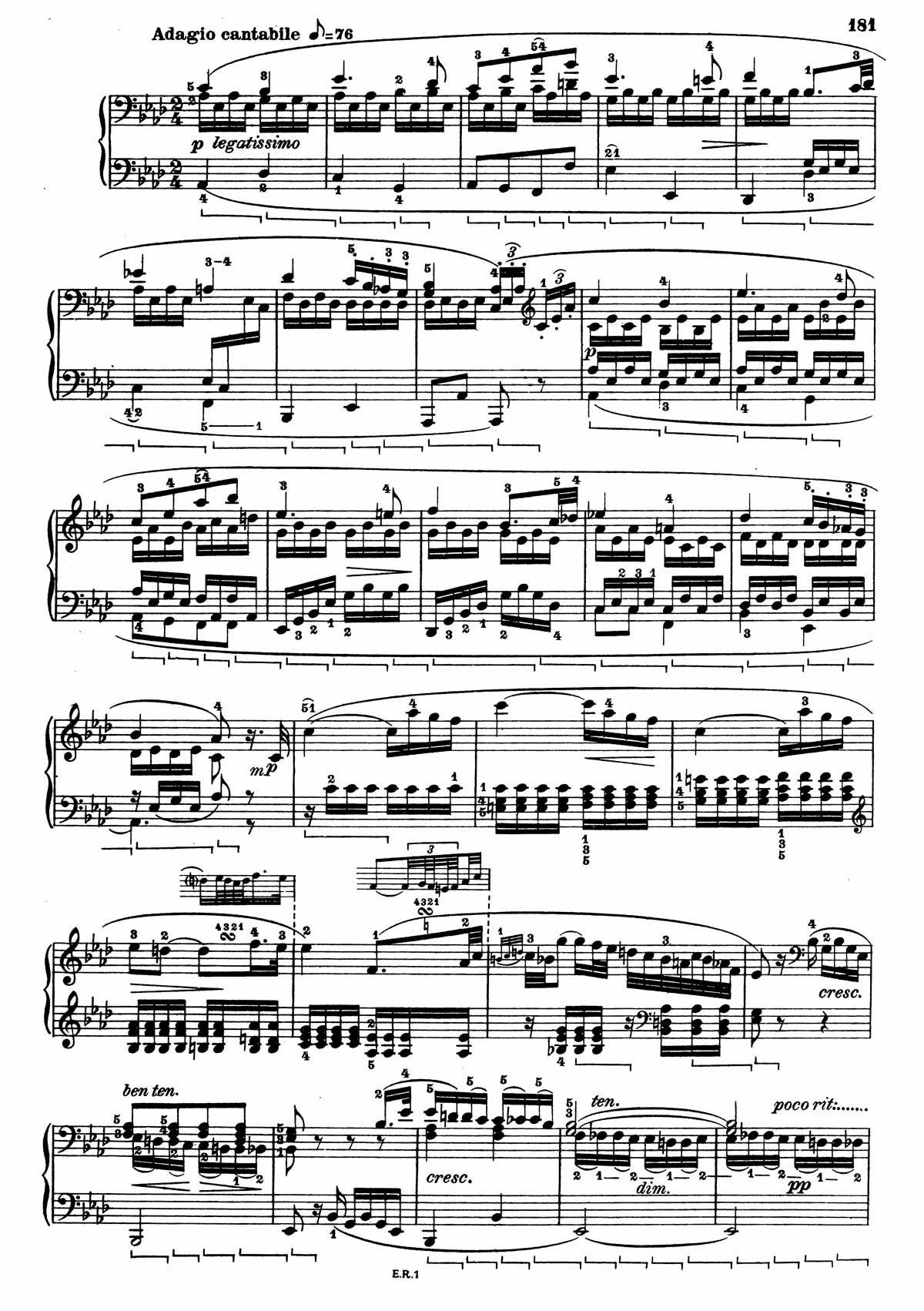 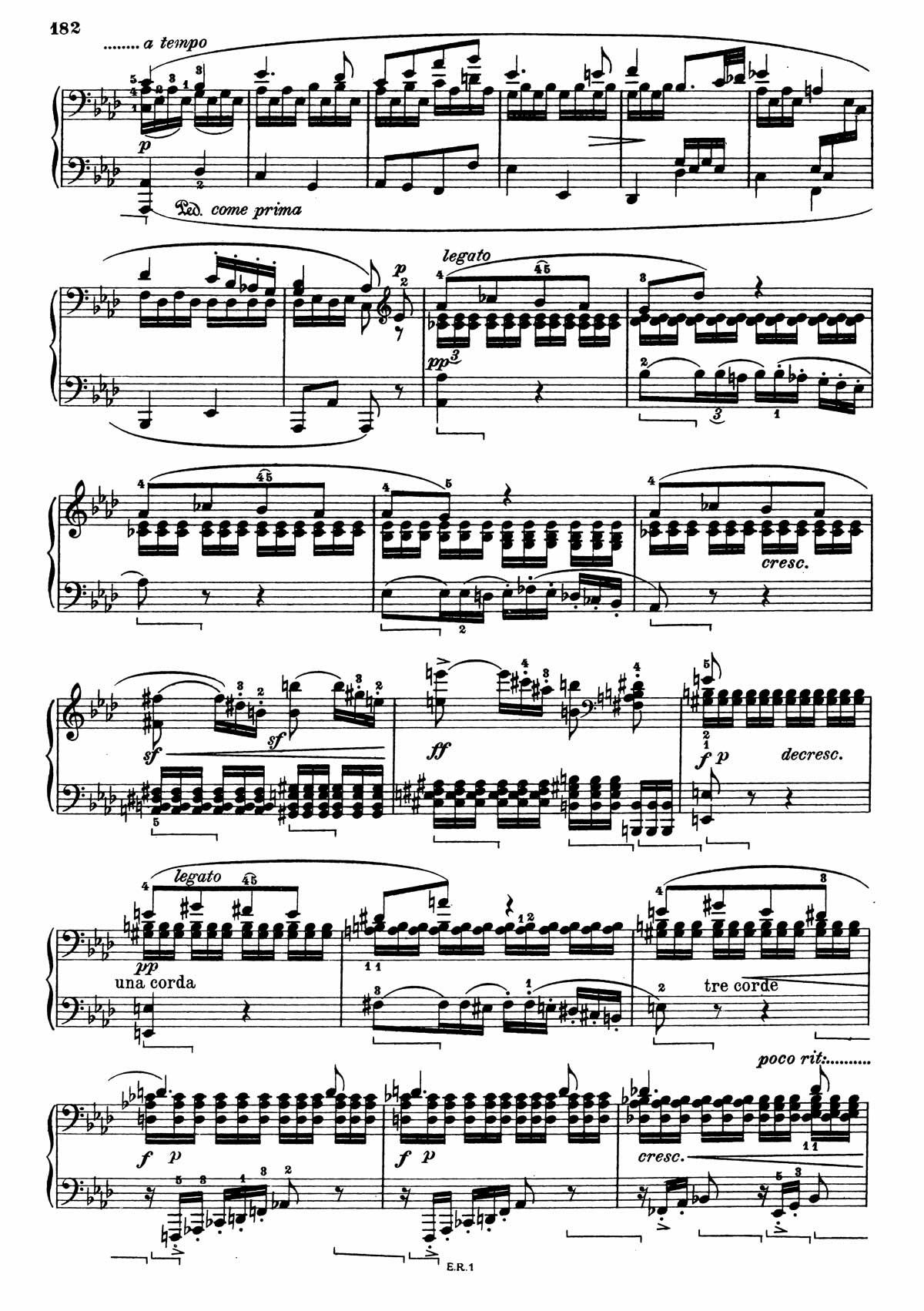 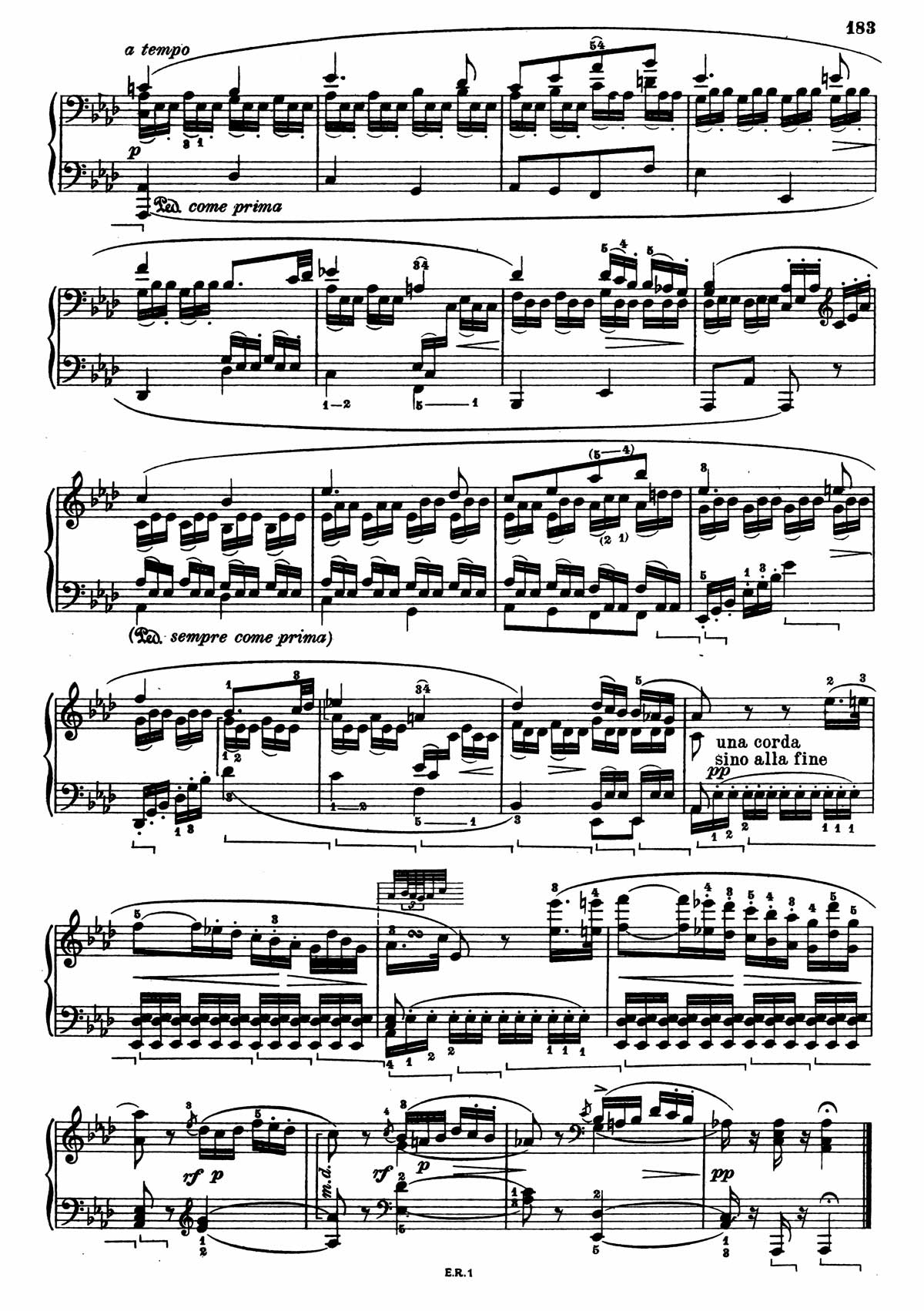 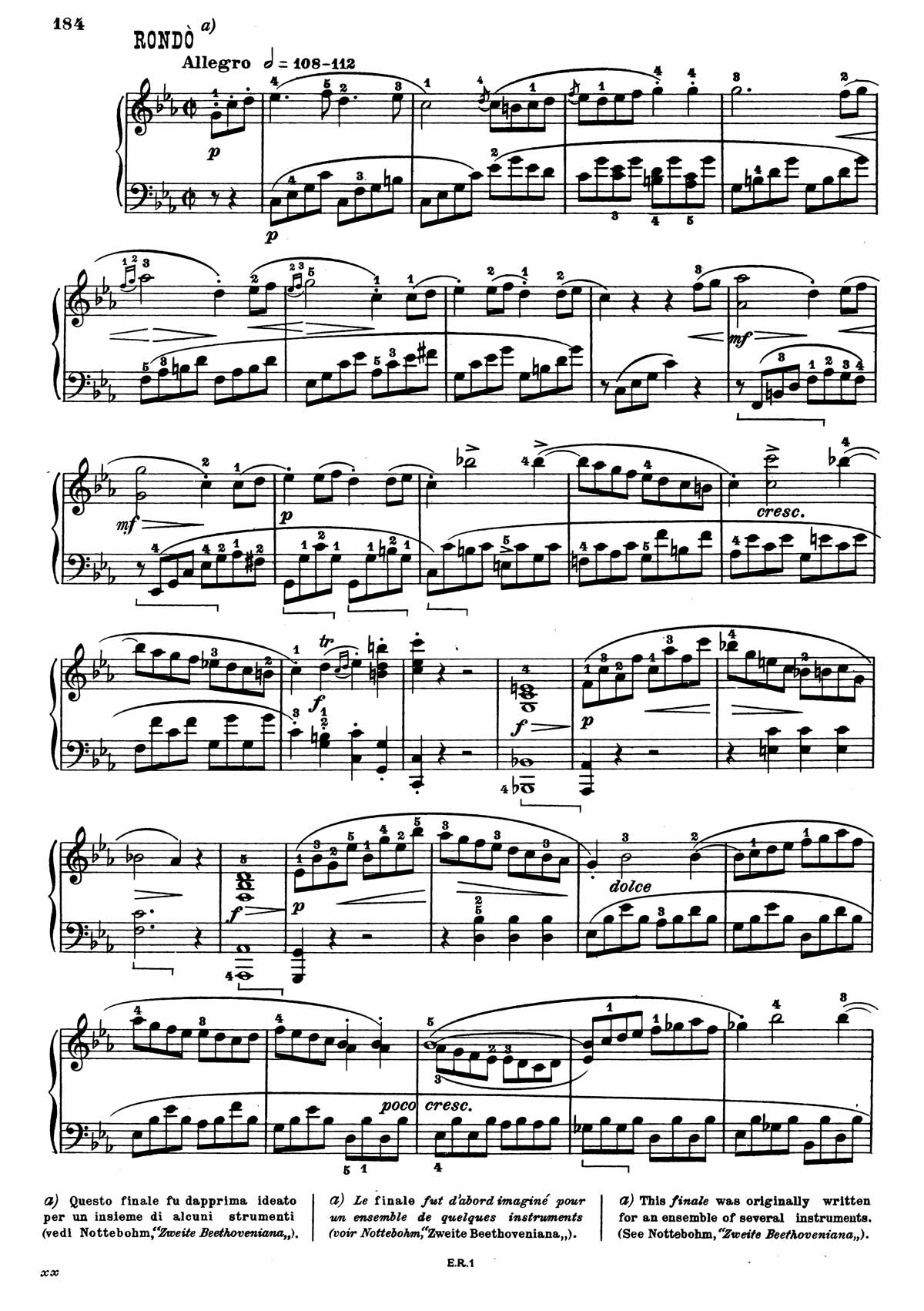 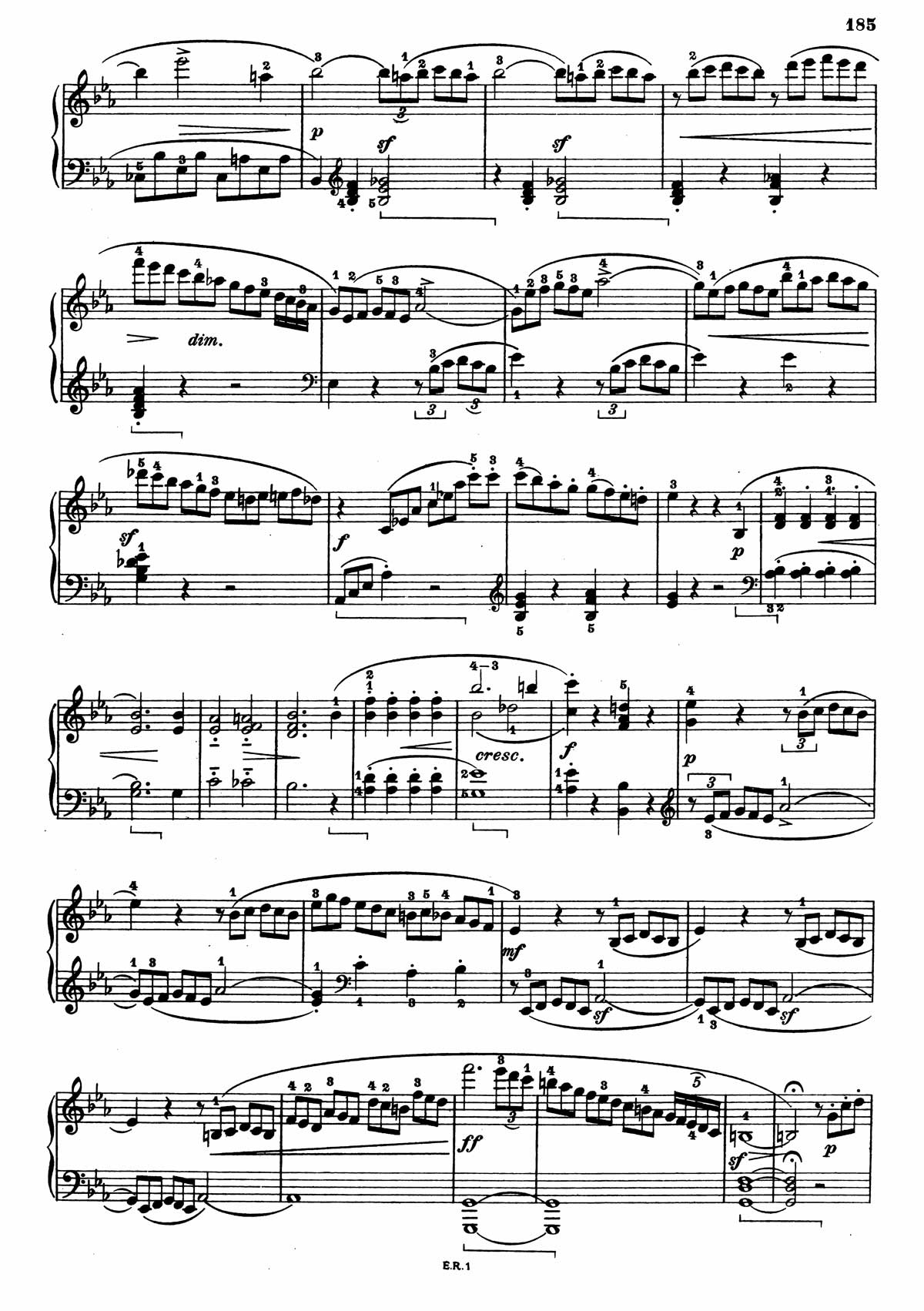 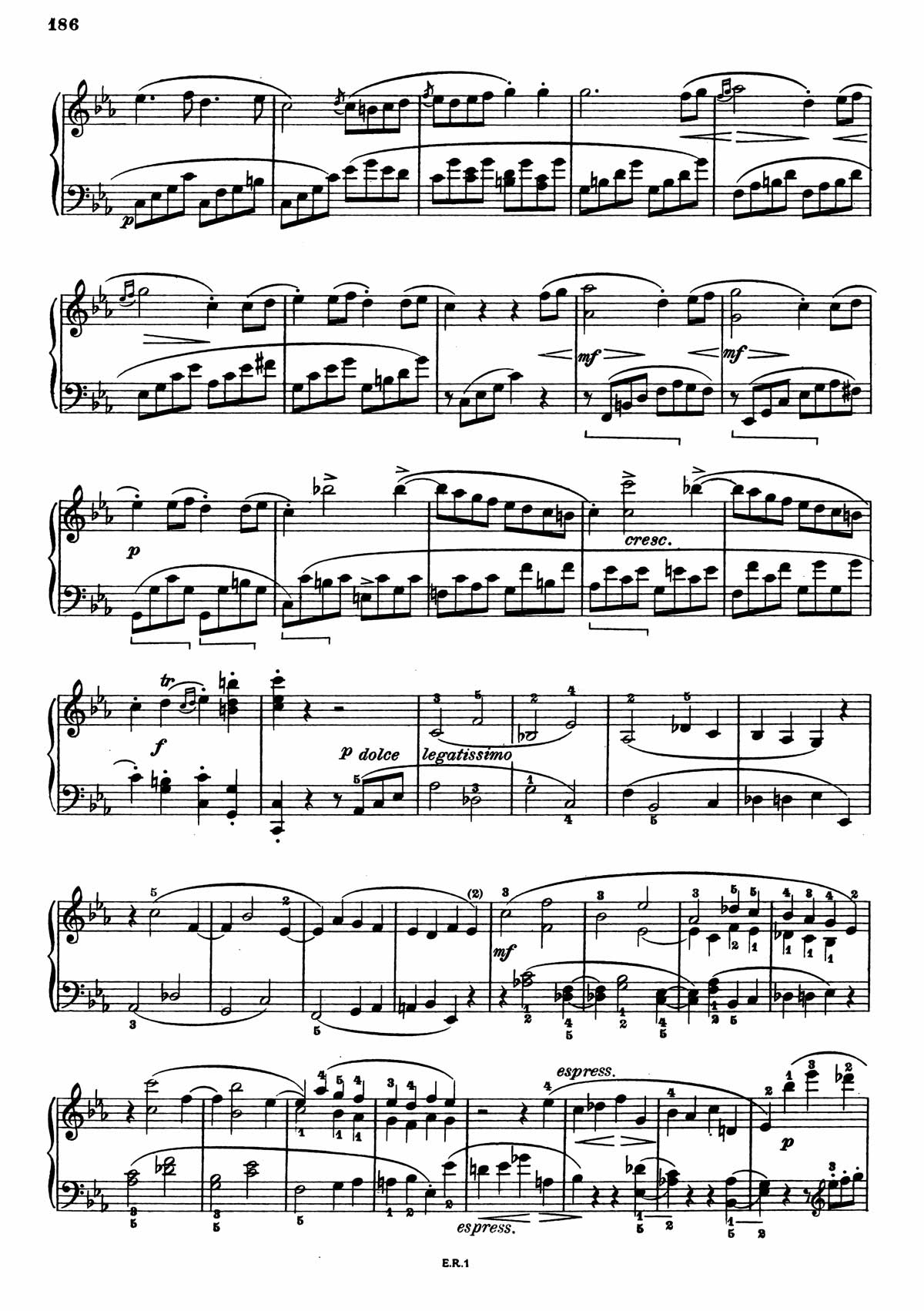 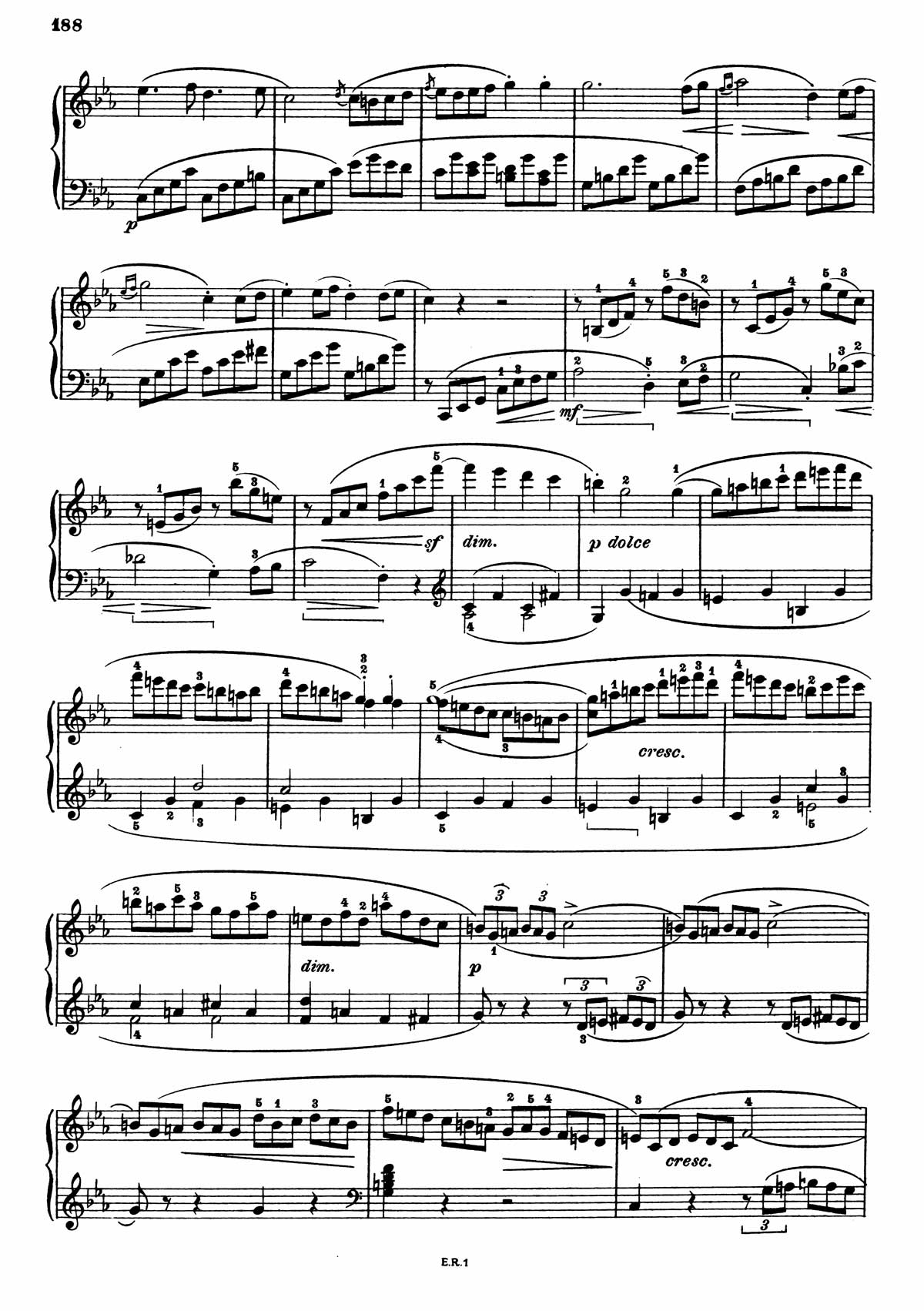 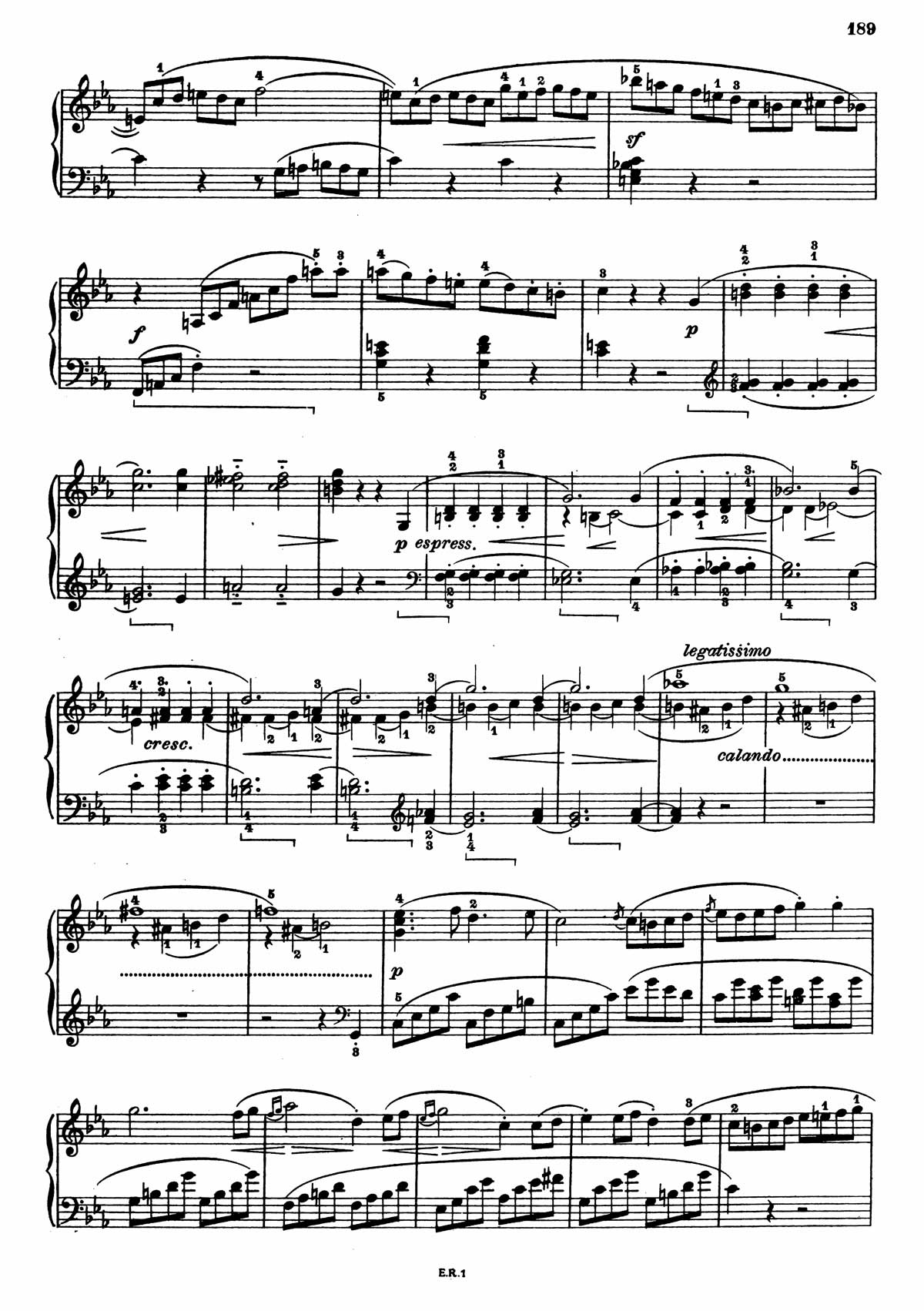 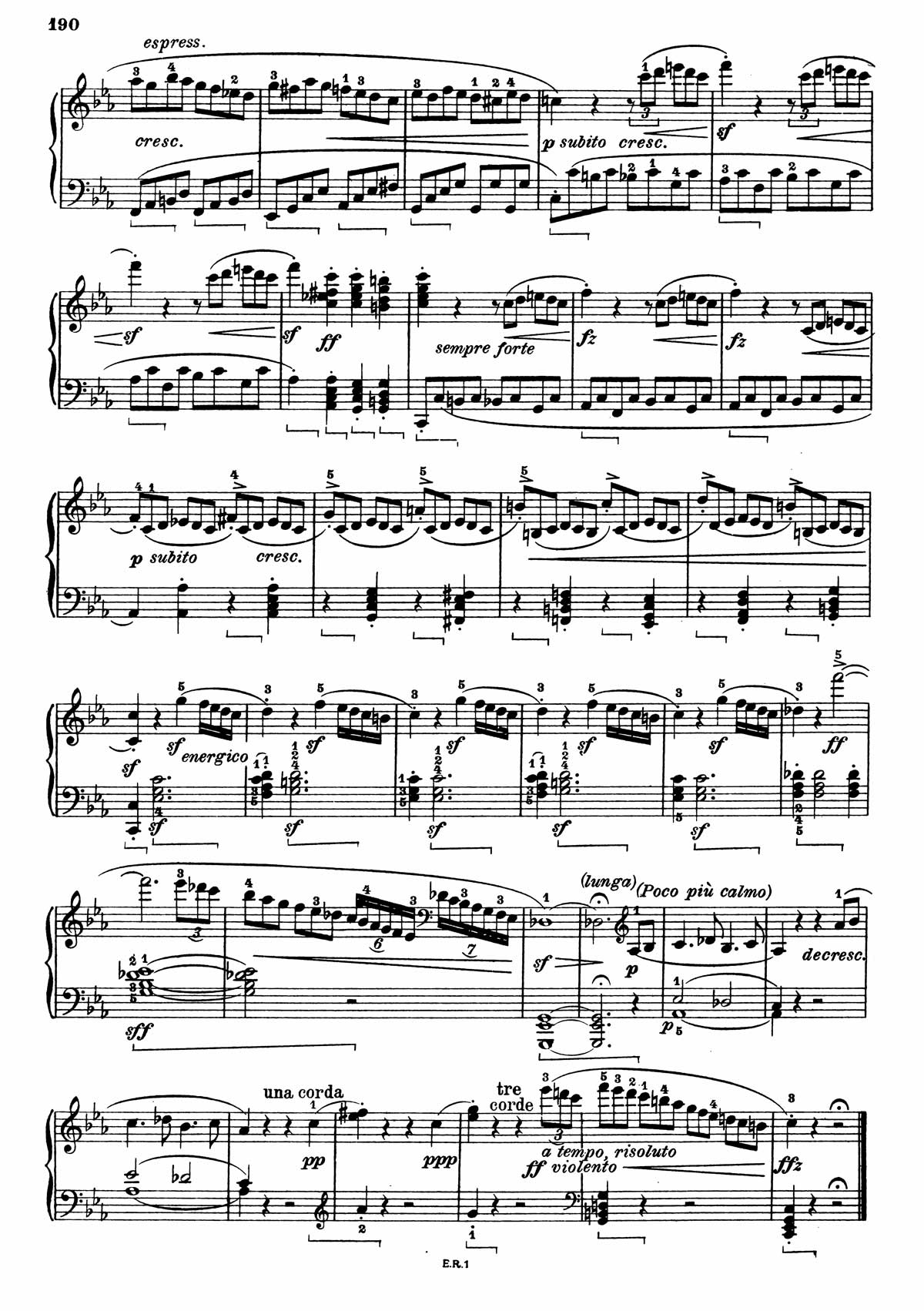 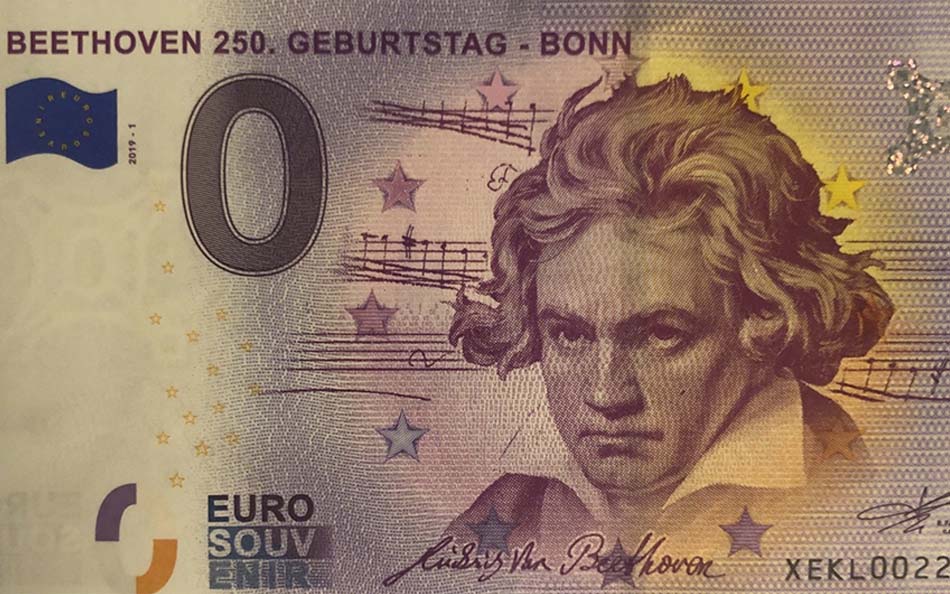 Sonata No. 8, Opus 13 by Ludwig van Beethoven was subtitled "Pathétique" by the editor, remember that Beethoven did not give the title that we popularly know to any of his sonatas. It was published in 1800, and written in 1799, when Beethoven was 29 years old. Beethoven dedicated the work to his friend Prince Karl von Lichnowsky.

This Sonata is fundamental in piano production for its values ​​of musical abstraction, for its philosophical connotations and future insights of a structural nature: the internal structure of the sonata is the most advanced of Beethoven's early works. It is considered one of Beethoven's master works, and one of the most performed in public, both in Beethoven's own lifetime and today. 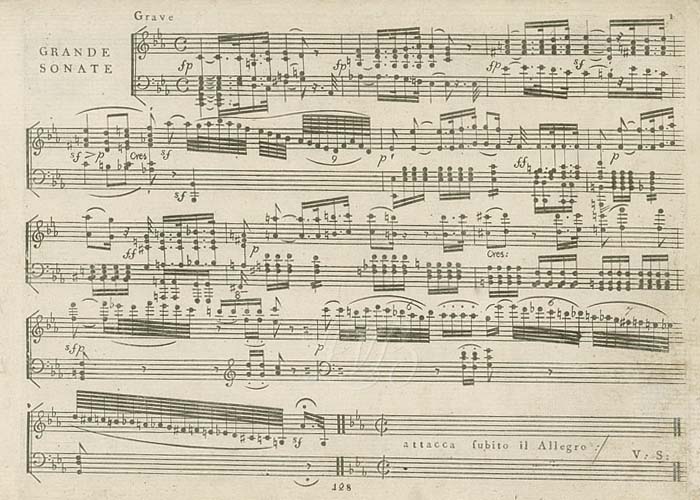 La Patética was famous from the moment it was first introduced, and it's not hard to see why; It contains three incredibly engaging movements with very different personalities plus unprecedented expressiveness, and contains some of Beethoven's best musical motifs.

Several important professional friendships developed for Beethoven during this period in Vienna. He befriended Antonio Salieri (1750-1825) and studied Italian Song Style with the composer over a period of two years 1800. Several prominent pianists who spent time in Vienna were also part of Beethoven professional world, in particular Joseph Wölffl (1773-1812), his piano performance was much admired and he dedicated a series of sonatas to Beethoven, and Johann Baptiste Cramer (1771-1858), whose performances and compositions and methods for piano were revered by Beethoven. In addition to sonata No. 8, Beethoven wrote a set of six string quartets and the ymphony no. 1, op. 21. During this period Beethoven taught the sisters Josephine and Therese Brunsvik and fell in love with Josephine. She married Count Joseph Deym (1752– 1804) a year later, but Beethoven's feelings for her were rekindled after the Count's death. Teresa never married, but her memoirs and correspondence with Beethoven are a useful source of information about the composer.

The designation Pathetique was one that was generally used in the period to indicate emotional intensity, a concept that appealed to members of a society laden with formality. The name appeared on December 18, 1799, announcement of the publication of the work of Franz Anton Hoffmeister (1754-1812). Two months later the work was also published by Joseph Eder (1760-1835). The sonata enjoyed immediate popularity, having been published seventeen times in a lifetime. Sonata No. 8 is dedicated to Prince Karl Lichnowsky (1761-1814), the prince and his wife Maria Christiane (1765-1841) were accomplished musicians and patrons of the Arts. Shortly after his arrival in Vienna, Beethoven lived in the Lichnowsky house for several years, and many of the composer's works were first heard at musical evenings there. were made. Furthermore, the prince was influential in gaining the support of other members of the nobility. Beethoven dedicated several important works to the prince: piano sonatas No. 8 and No. 12, the piano trios op. 1 and the Symphony No. 2, op. 36.

This sonata is the first of a group that could be considered as dramatic three-movement sonatas. It includes other piano sonatas, all of them with popular nicknames: Sonata No. 14, Moonlight, Sonata No. 17 The Tempest, Sonata No. 21 Waldstein, Sonata No. 23 Appassionata and the Sonata No. 26 Lebewohl. Sonata No. 8 contains two themes that are among the best known of Beethoven: the opening phrase of the first movement and the central theme of the second.

The first and second movements, although they are of different keys, open with the same melodic note in the same key, C, and the initial phrase rises to the same E♭, which is prolonged and resolved downwards.

The closing section of the first movement exposition shows syncopation at measures 89 to 90, etc. similar to the second theme of the third movement in bars 25 and 31, both in the key of E♭ major.

The dotted rhythm of the introduction suggests the style of the Baroque French Overture, a style that the composer will use again at the beginning of the Sonata No. 32. Its reappearance throughout the movement, both in its original tempo and as a motif in the Allegro, is a procedure that Beethoven also used in the first movement of the Sonata No. 17.

There is controversy over where to start the replay of the exposure. Of the seventeen editions published during Beethoven's lifetime, all but two show the first indication of repetition in the Allegro di molto. However, it is also not shown in two contemporary editions such as the Haslinger edition (c. 1828) and in Breitkopf & Härtel Beethoven Gesamtausgaben (1860). The absence of the repetition sign suggests that the introduction be included in the repetition of the exposition. Performers who take the repetition of the exposition do not agree on whether to go back to the beginning of the movement or the Allegro di molto.

The punctuated rhythm of the French overture had been used in chamber works, symphonies and keyboards such as the partitas by J. S. Bach. Other composers of the period who incorporated this style into the piano sonata are Haydn (Hob. XVI / 37) and Clementi (op. 34, no. 2, and 40 , no. 3). As noted, Beethoven will use it again in the introduction to the first movement of the Sonata No. 32.

In Sonata No. 8, most artists play the dotted rhythm as written. The English music historian Thurston Dart (1921-1971) suggested that the practice of maintaining the fastest possible relationship between the short antecedent and the next strong beat in the French overture style persisted well into XIX century. Dart quotes the music of Beethoven for a possible application of this principle without specifically citing this sonata.

The opening theme features a rising set of double notes on a tremolo bass pedal point, all marked piano. The left-hand tremolo figure was easier to play and control on pianos of the time.

The opening phrase of the first theme is modulated through A♭ major and B♭ major, the latter extended through cadences reiterating the dominant of the expected relative major, E♭ major.

An extended closing section in the relative major, E♭ major, culminates in a reaffirmation of the first theme in that key.

Introductory material, marked Tempo I, modulates E minor and acts as a bridge for a return of the Allegro di molto.

The opening phrase of the intro is fragmented, the last two notes now sound as a rapid two-note figure.

A pedal point in the dominant of the opening tone supports an ominous figuration in a low register of the piano that uses the opening phrase of the allegro theme to rise to a reiterated climax, now supported by overlapping half notes in the low register, a texture that It must have startled the audiences of the period.

The change extends from the allegro of the theme of the first phrase through the tones of D♭ major and E♭ minor and reaches a half cadence in F minor.

The second theme begins in the subdominant, F minor, but returns to the opening tone at measure 237. The subdominant relationship can be seen in the recapitulations of the first movement of both of Beethoven's other piano sonatas in C minor, apparently Beethoven's own favorite tone, the Sonata No. 5, where the song opens in F major rather than minor, at bars 215-232), and the Sonata No. 32 at measures 124-128. The rest of the recap features all the material heard at the exhibition, including the return of the first theme of the allegro.

A final return to the theme of the introduction leads to a suspenseful cadence in the opening key.

The final statement of the first theme of the Allegro brings the movement to a brilliant ending, the final cadence, a series of short chords marked fortíssimo.

The opening theme has been singled out by writers as an example of unusual carryover, as shown in early editions and recent critical editions. Editors in the 19th century often changed the binding. The original carry-over is consistent each time Topic A appears. Various theories have been put forward as to why the composer chose this pattern, one of the most logical being that it was born from trying to play the theme with as much legato as possible without the aid of the pedal, the ligatures that describe the changes in the position of the pedal. hand.

A sixteenth note triplet accompanies the section C and remains for the reformulation of the theme A and the coda.

The first edition aligns the last note of the sixteenth note in a triplet shape with two thirty-second notes on the melodic line, which involves an earlier playing practice of extending the length of the eighth note with dots in the right hand to accommodate this congruence. Some editors adjust the alignment to a visual presentation that suggests polyrhythmic playing.

The first section B is in E♭ major; the second opens in C major and goes to the opening key, C minor. The section C is in A♭ major.

The first topic features an interesting variety of joint details. The first full measure shows a phrase mark ending on the last eighth note of the measure, suggesting that the strong beat of the next measure should be strong. This strong in the first beat coincides with the strong rhythm of measure 4, preceded by quarter notes in staccato. The two paired notes in the following sentences add to the articulation challenge. Finally, the care with which the composer marks them in the indicated staccato is exemplified by comparing the quarter notes in the downbeat of measure 8, where the note does not show staccato, thus ending the phrase, with the downbeat of bars 12 and 14, where the staccato marks assist black to highlight the following syncopations. Also compare the quarter notes in bars 5 and 6 to those in bars 9 and 10.

A rising passage built over the dominant of the opening tone paves the way for A's return.

A dramatic coda based on themes A and B with unconventional sforzandi features and a sustained dominant seventh in the key of A♭ major. A surprise return to the opening tone brings the work to a brilliant ending. Leaving remote pitches or slowing down the tempo in endings occur multiple times in sonatas. Compare this ending with the endings of the Sonatas No. 3, No. 5, 24, 26 and No. 28.