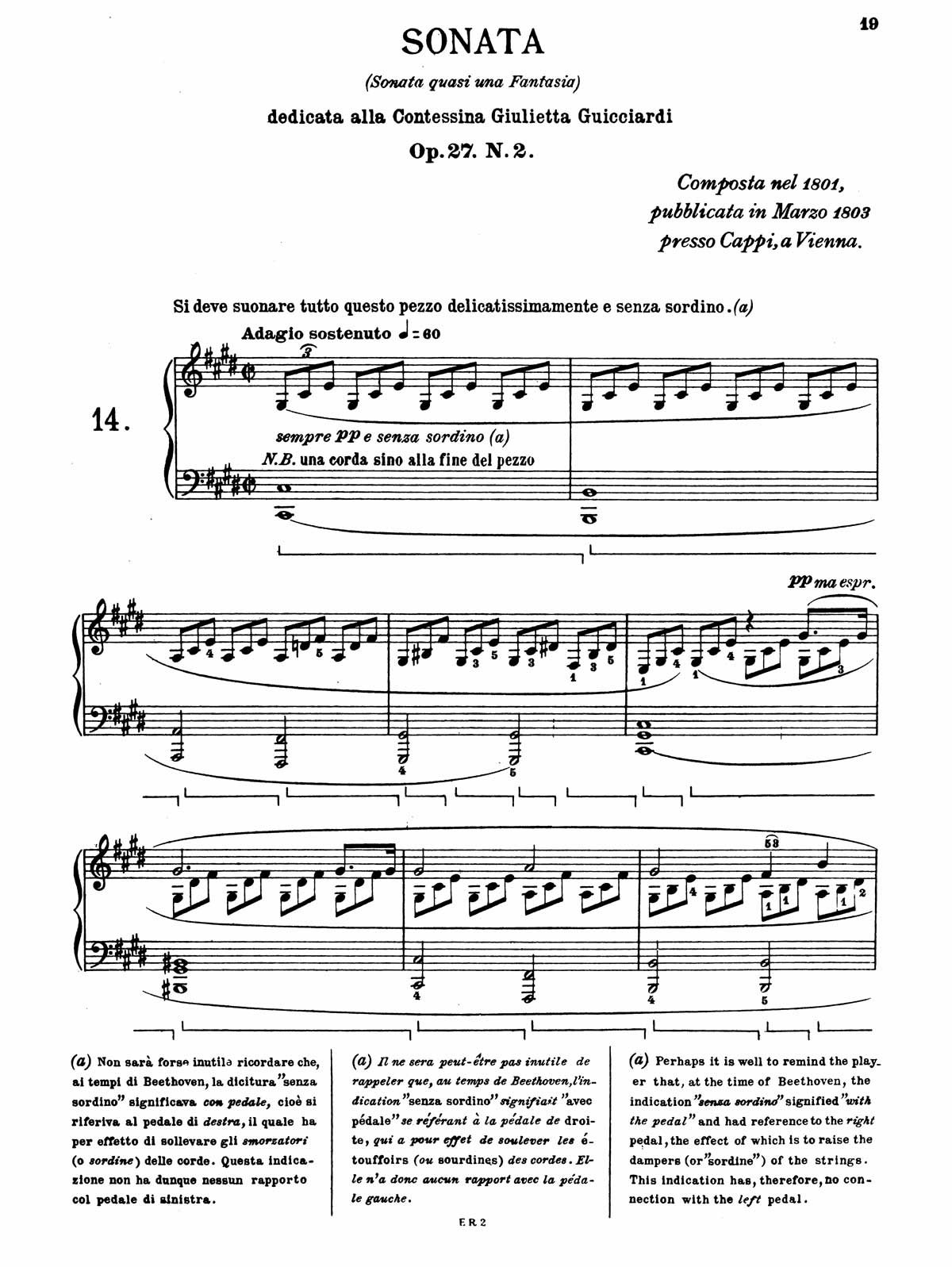 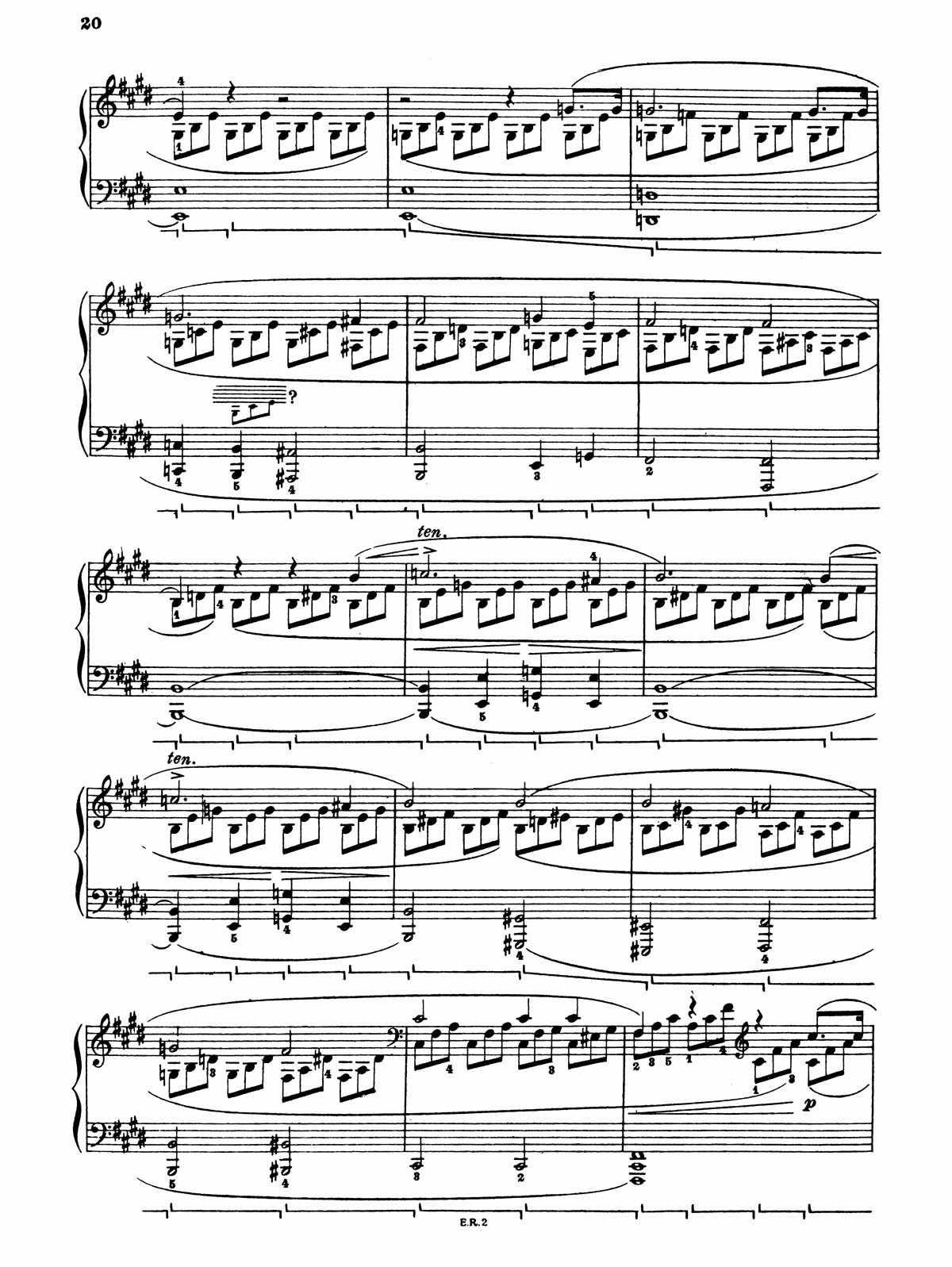 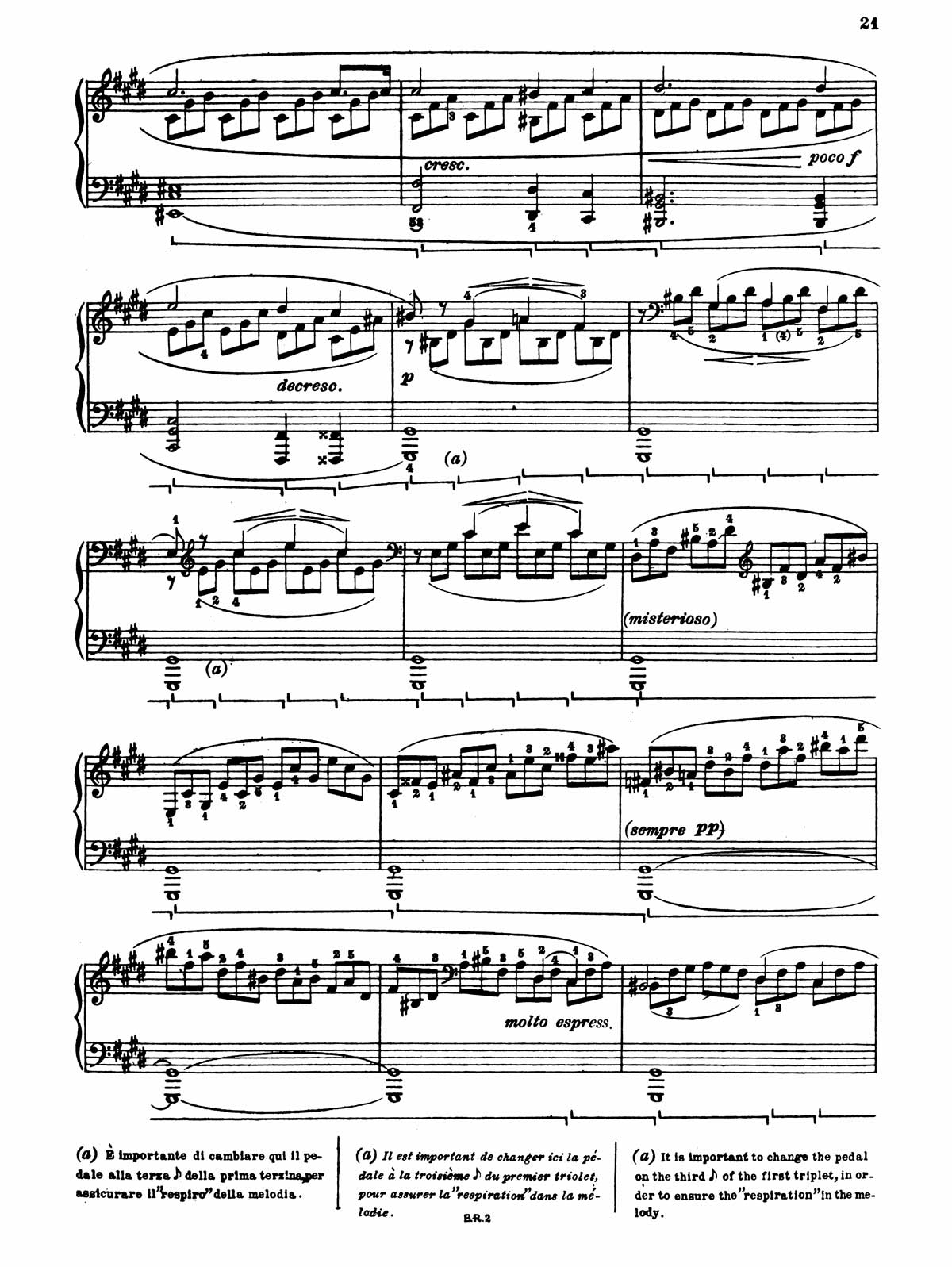 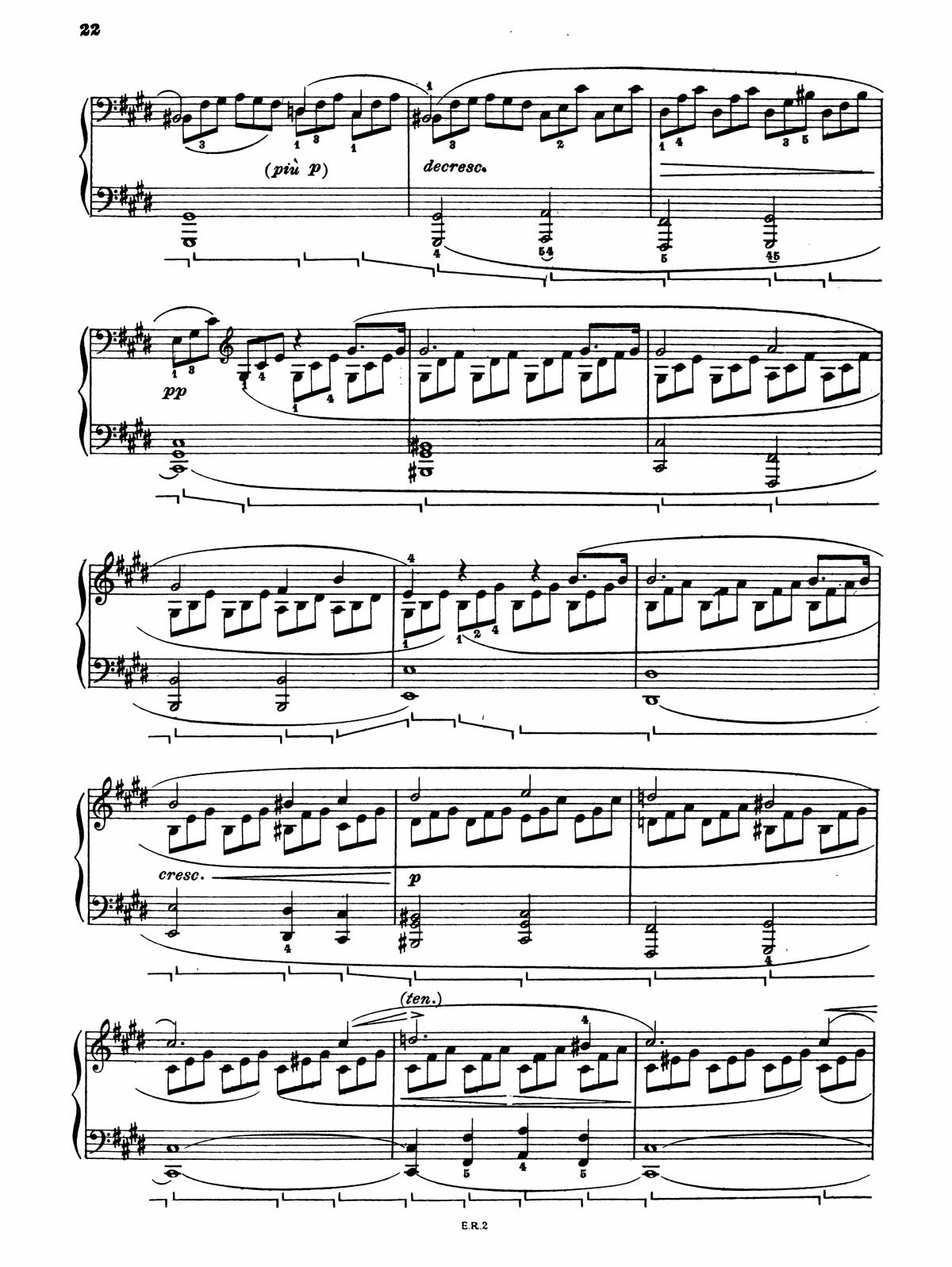 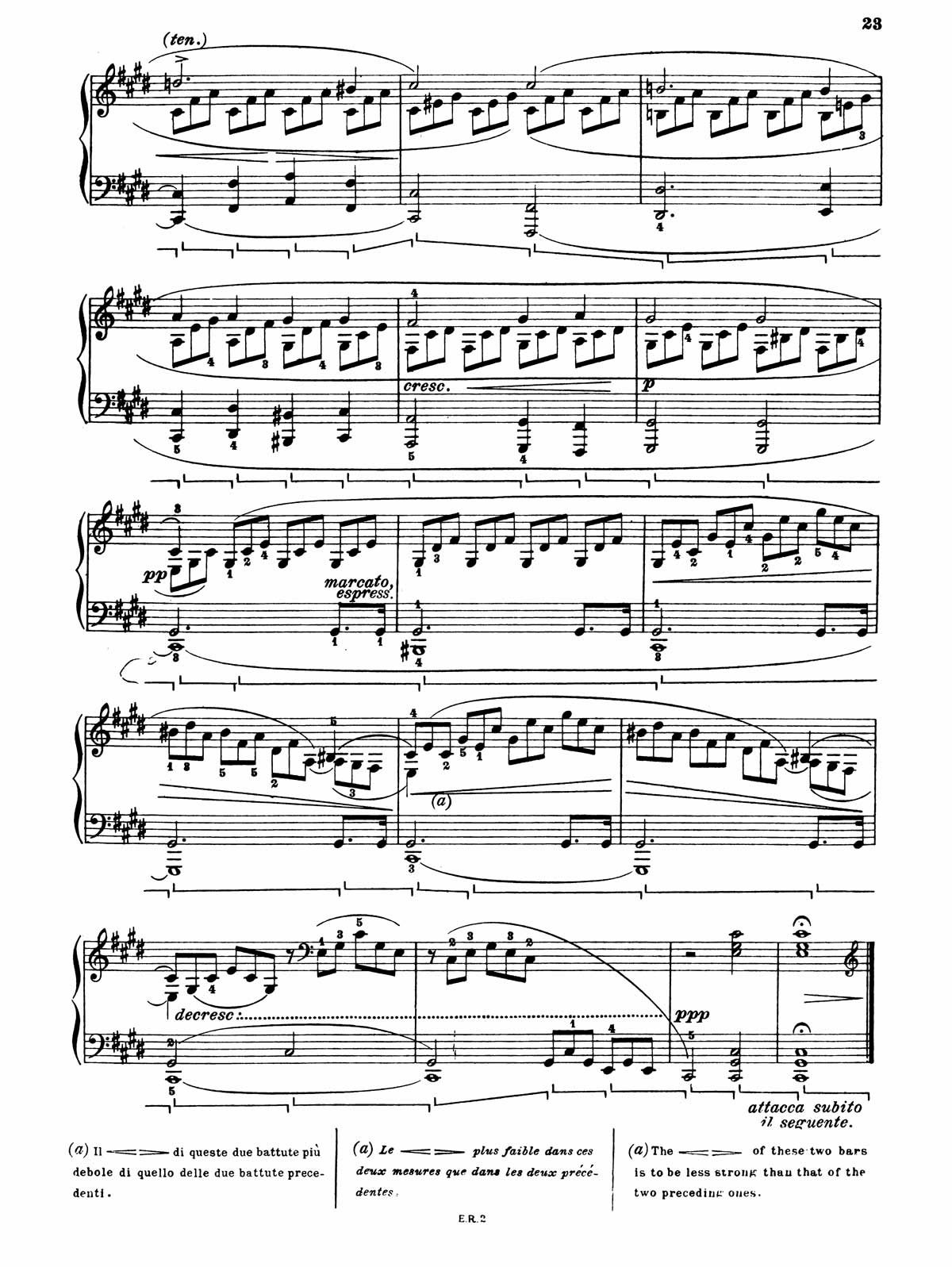 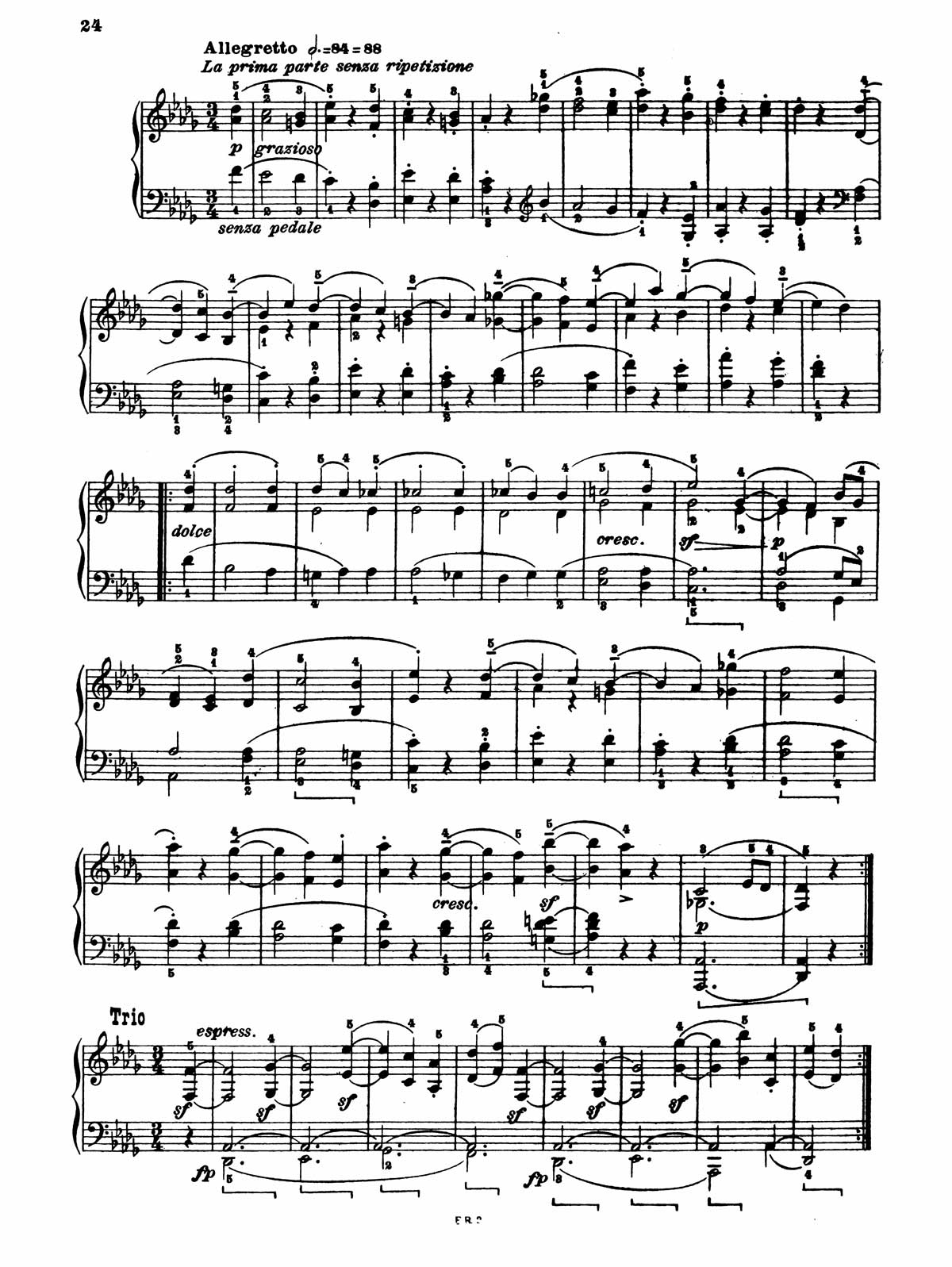 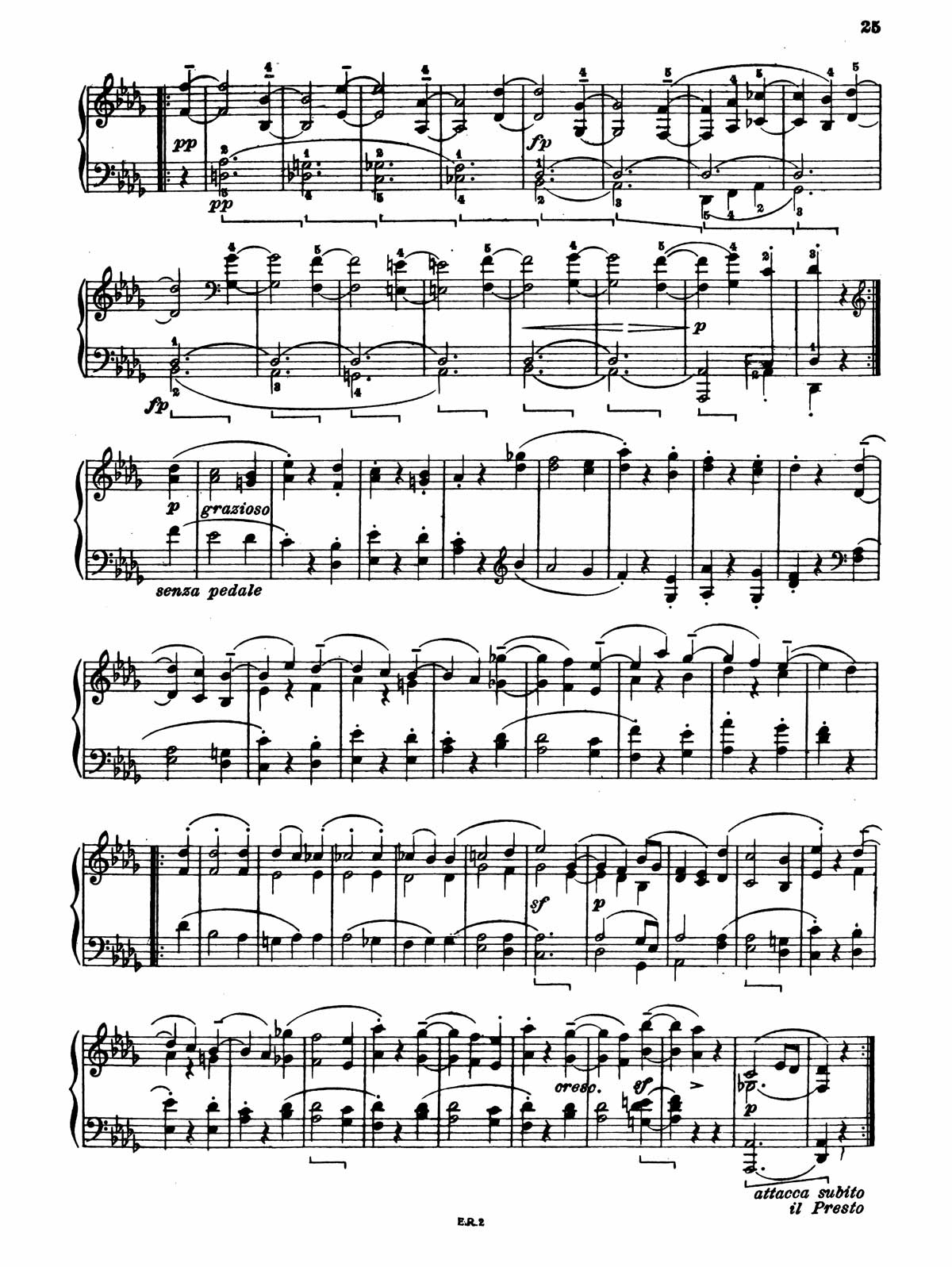 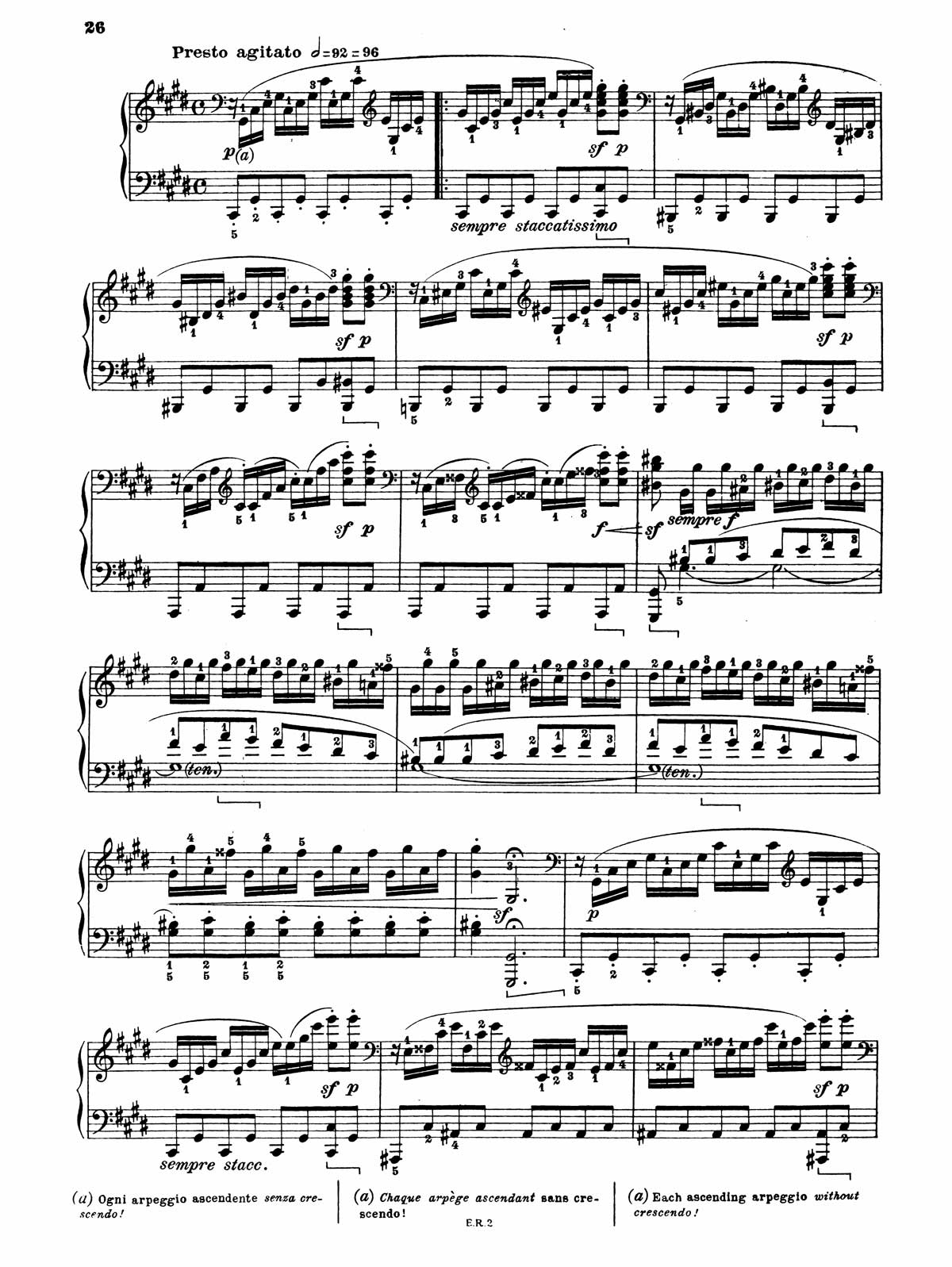 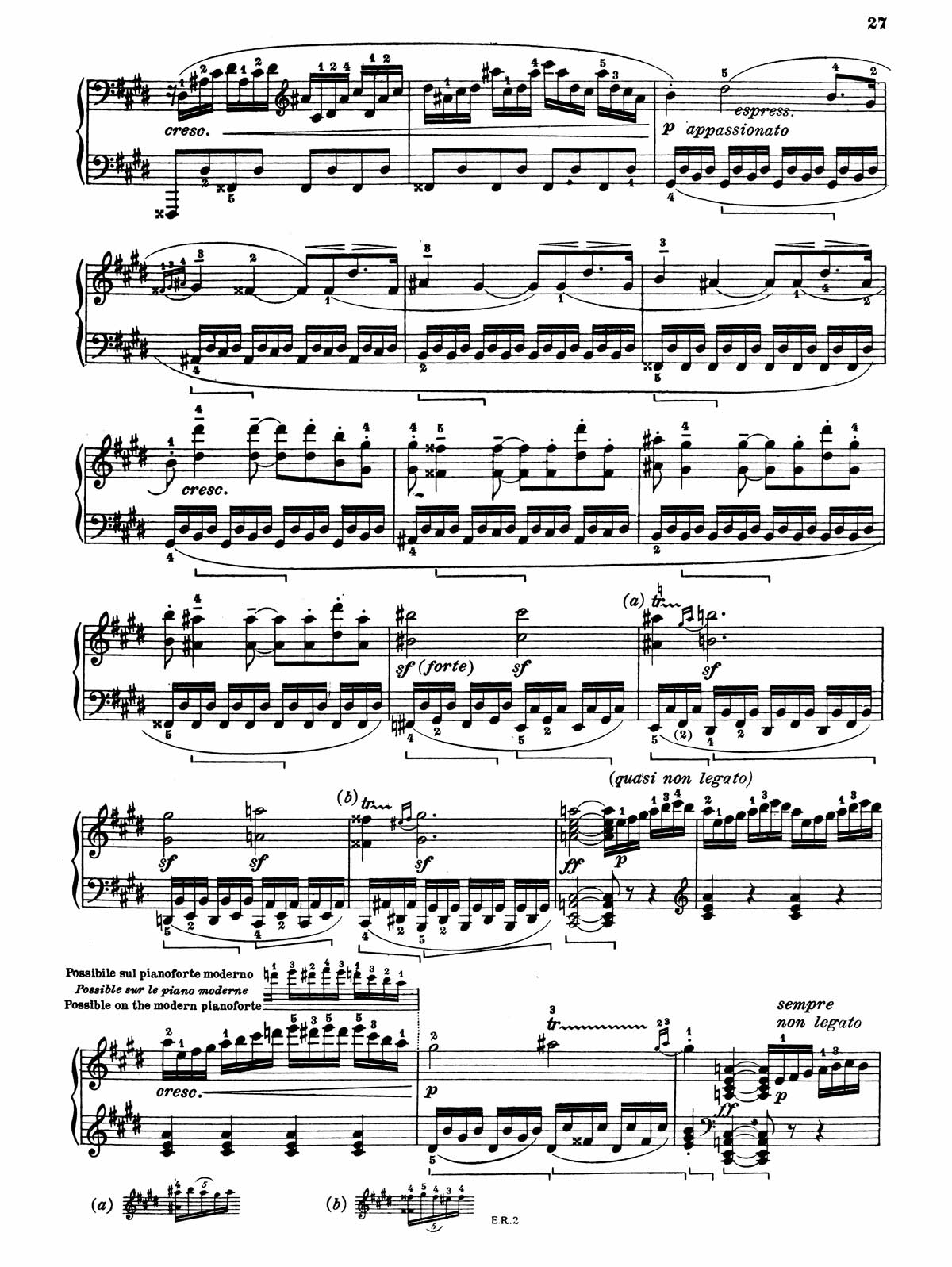 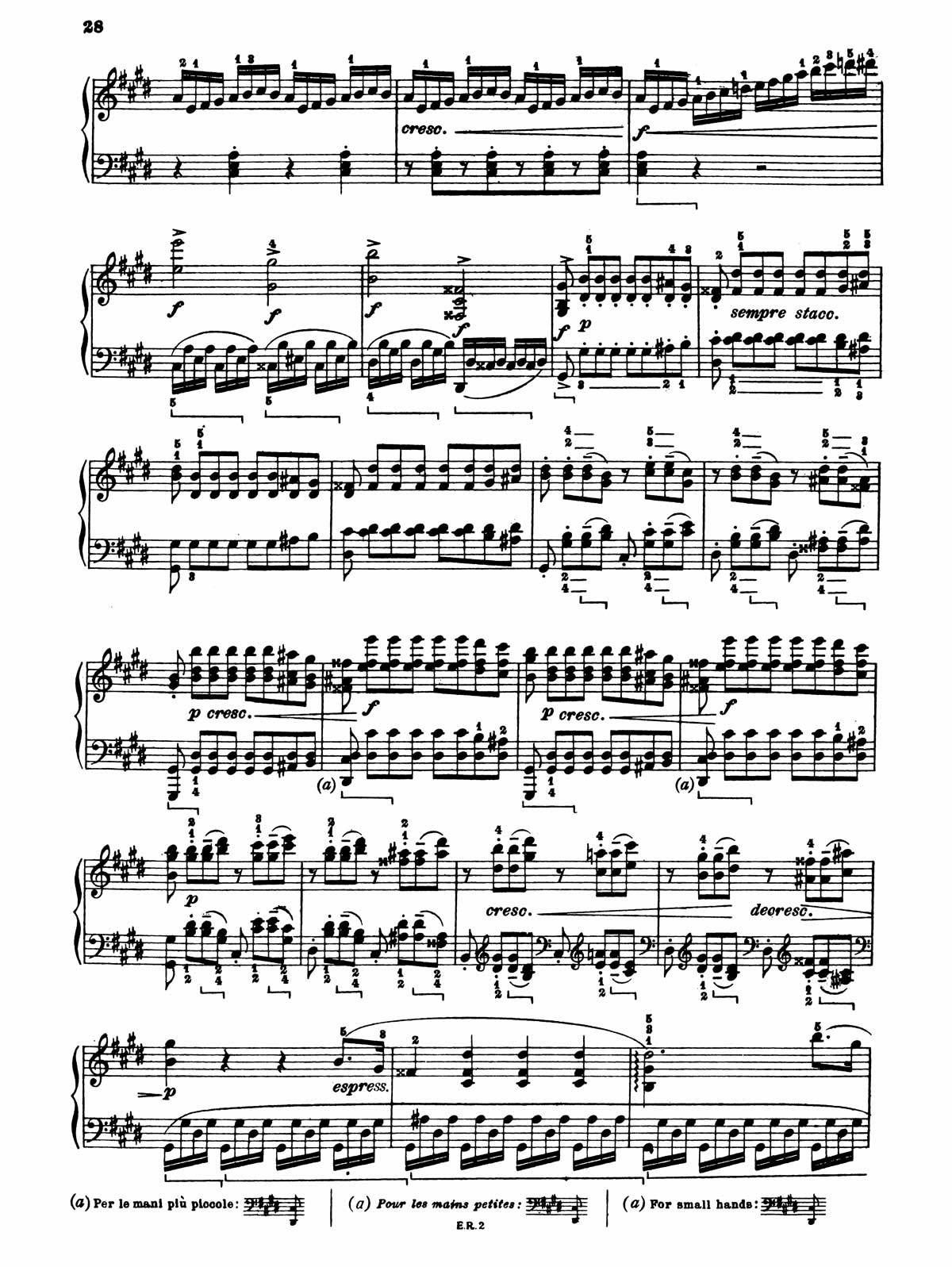 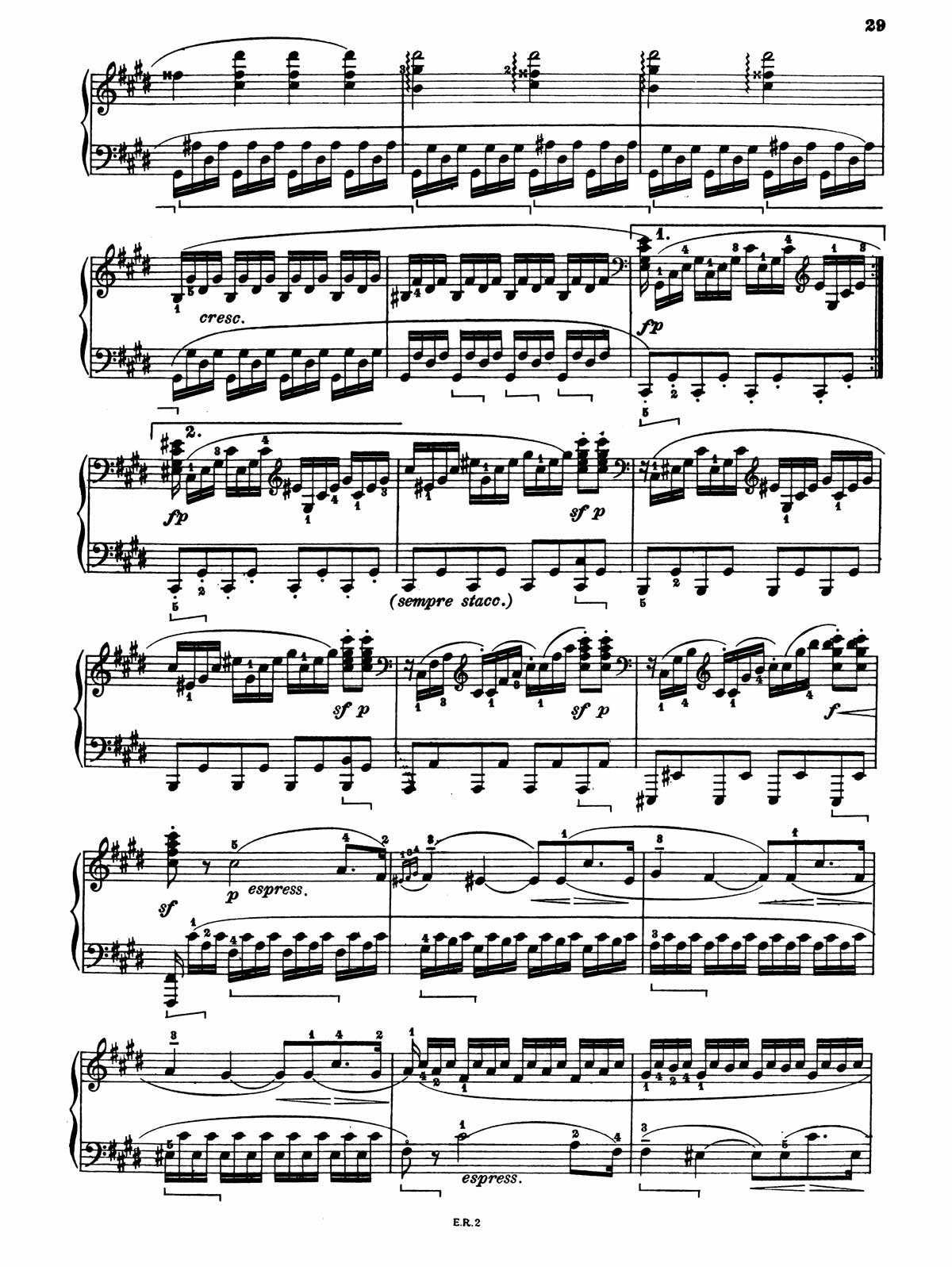 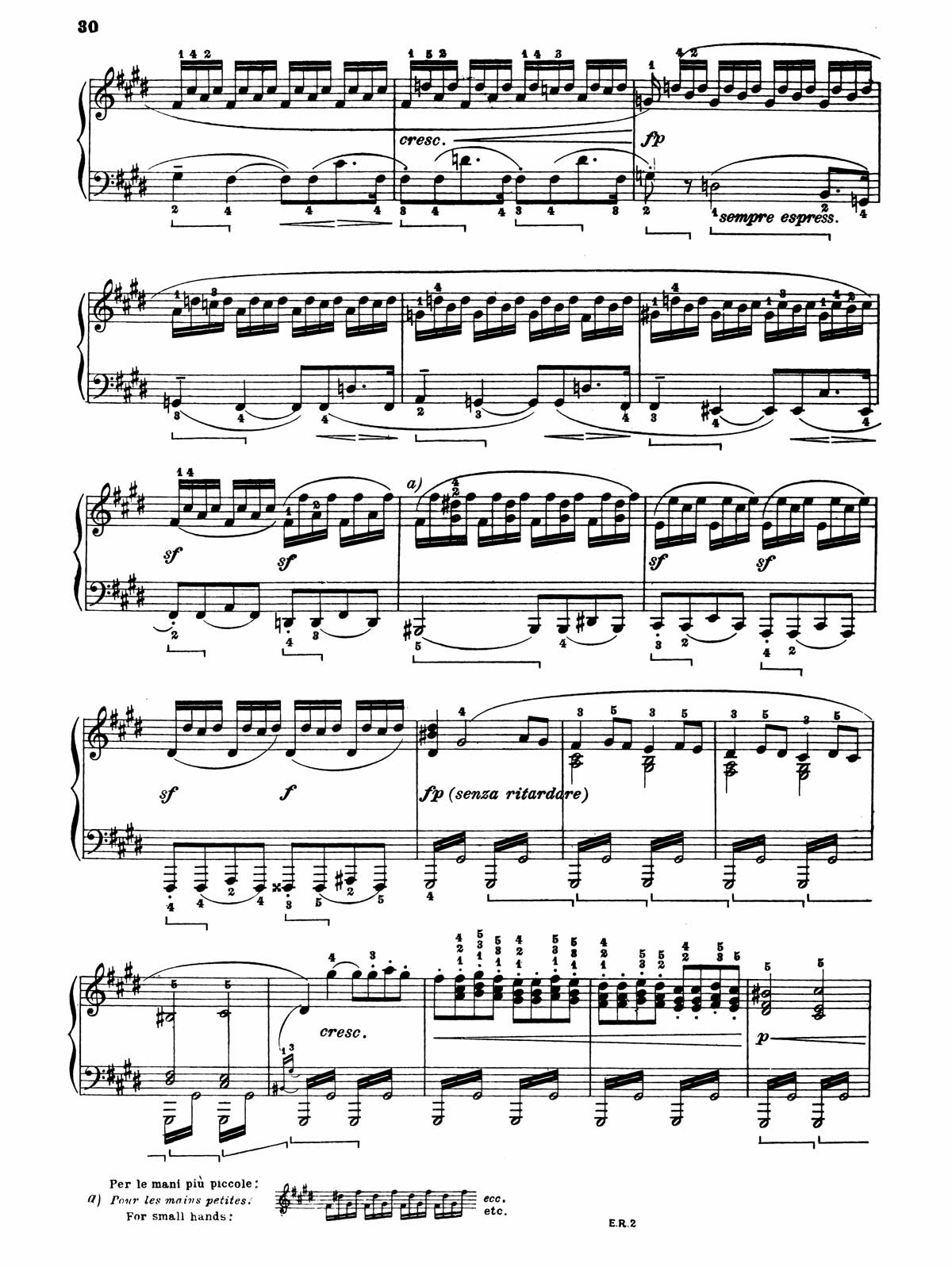 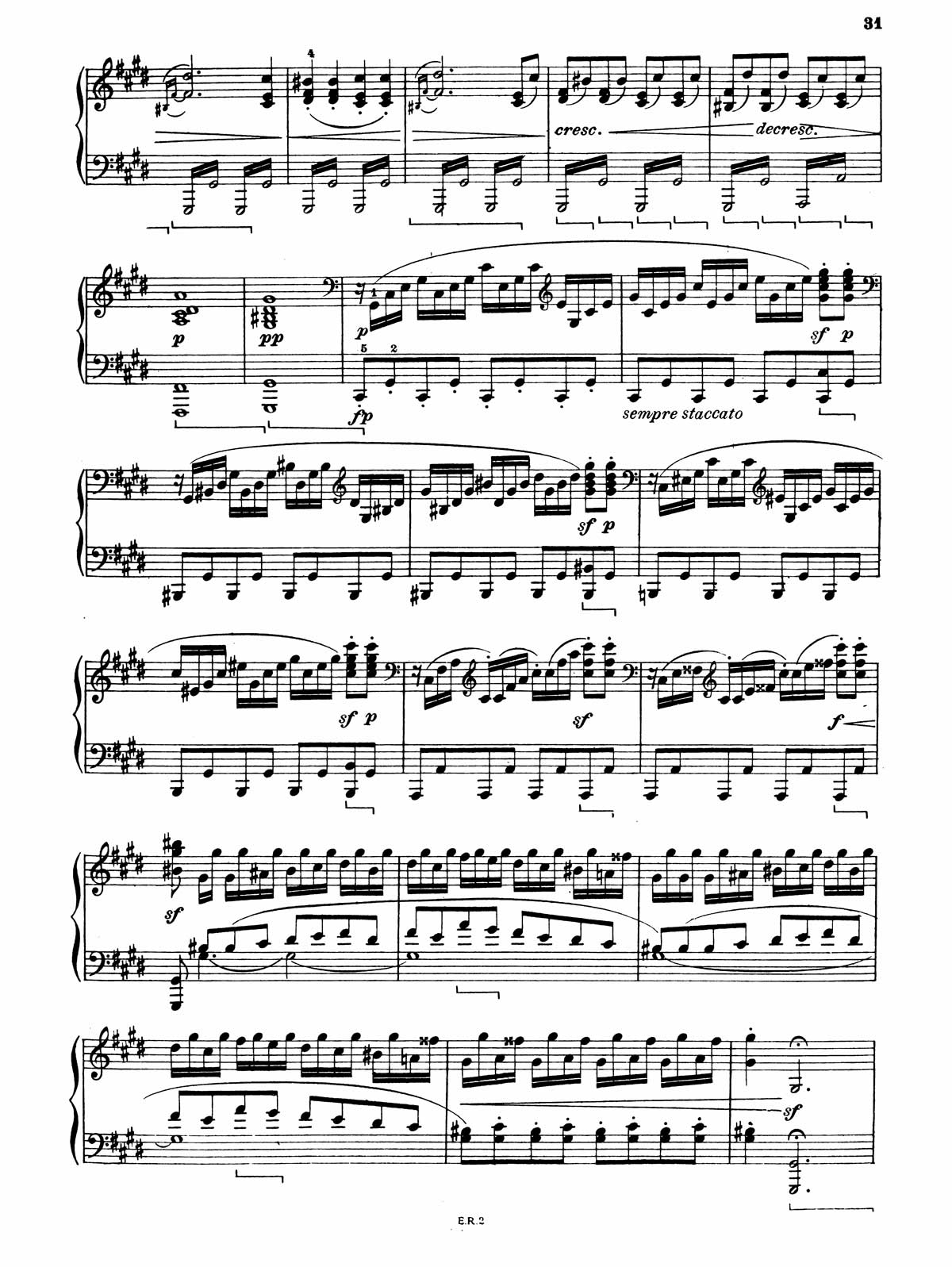 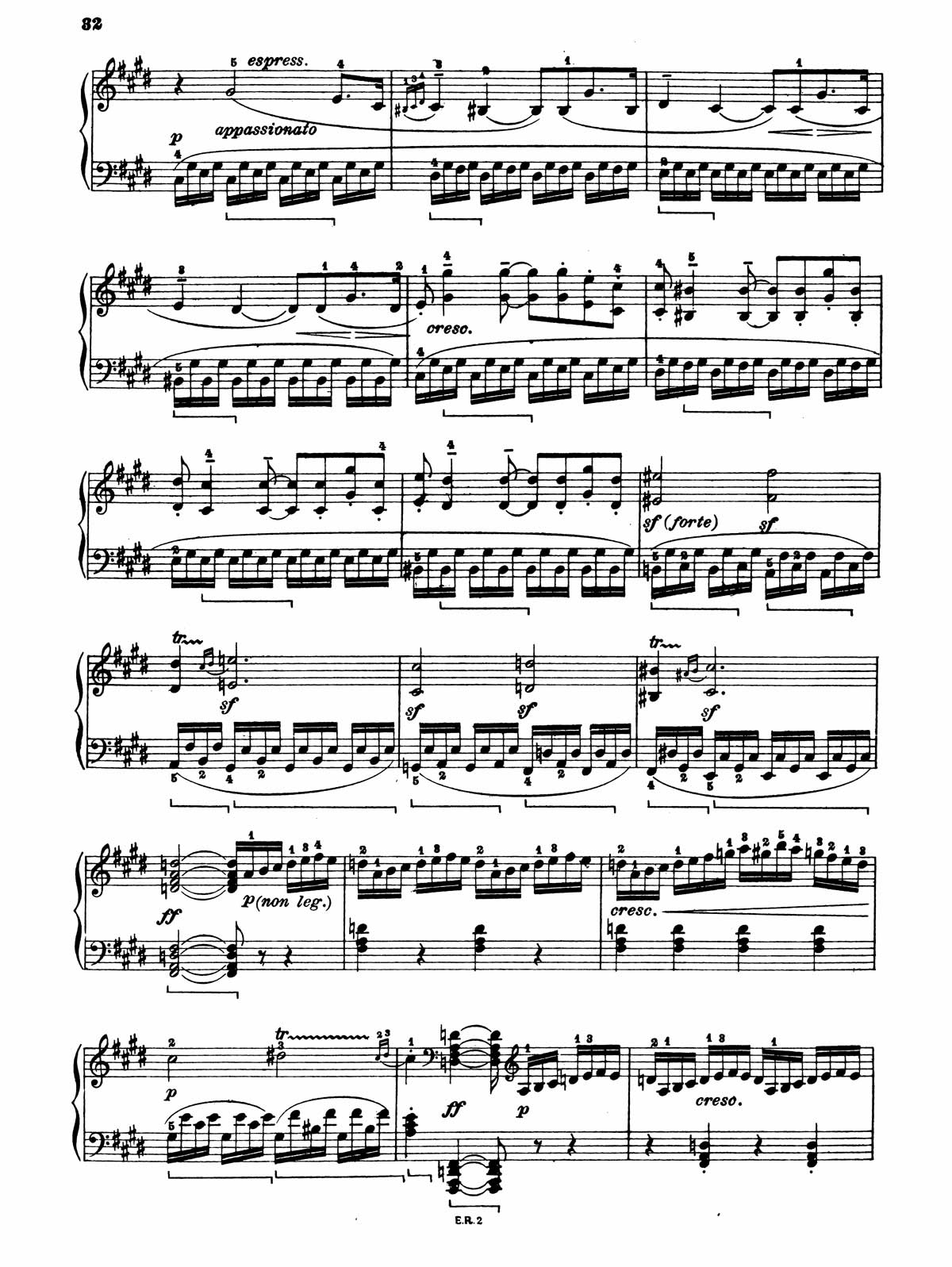 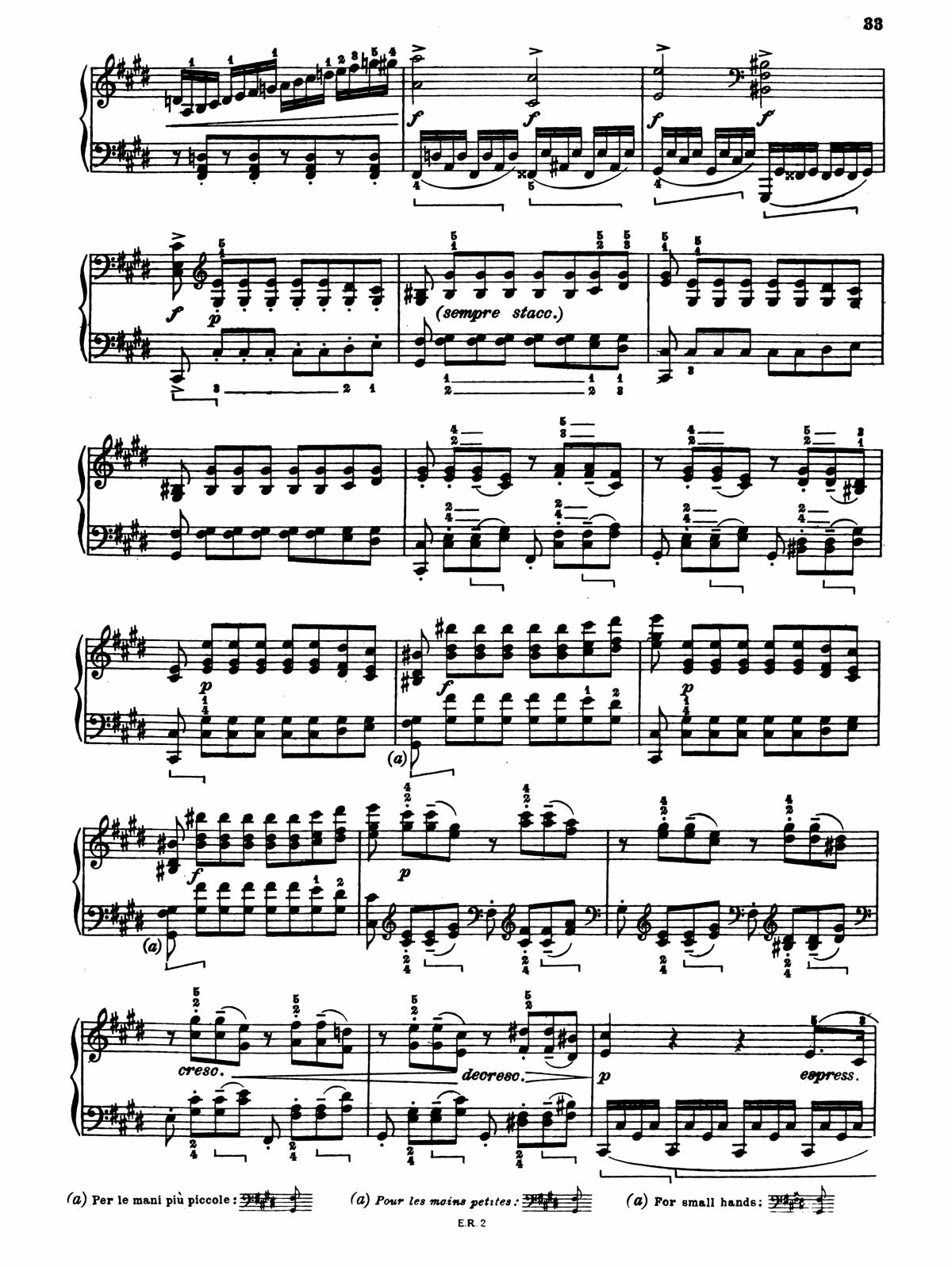 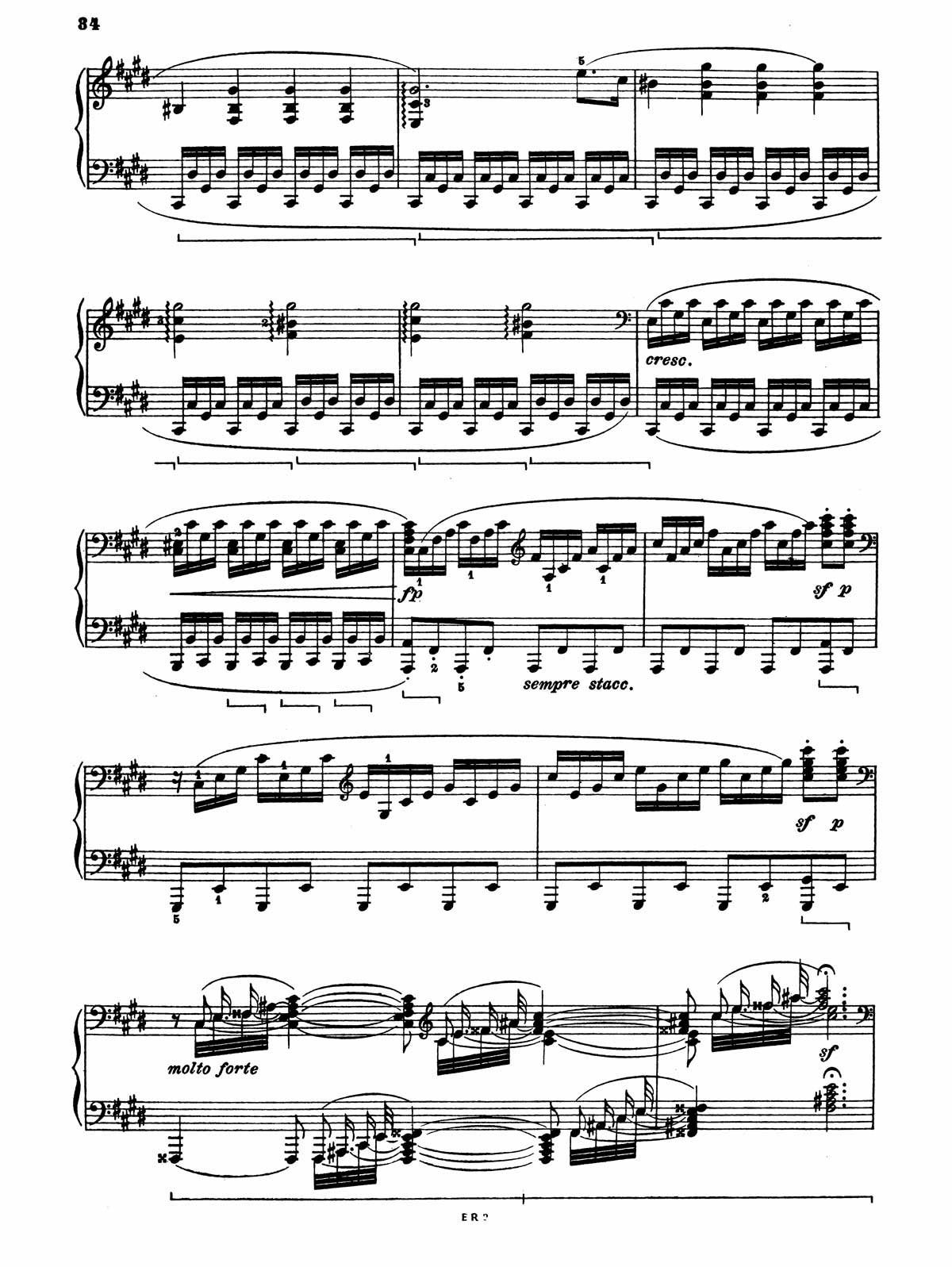 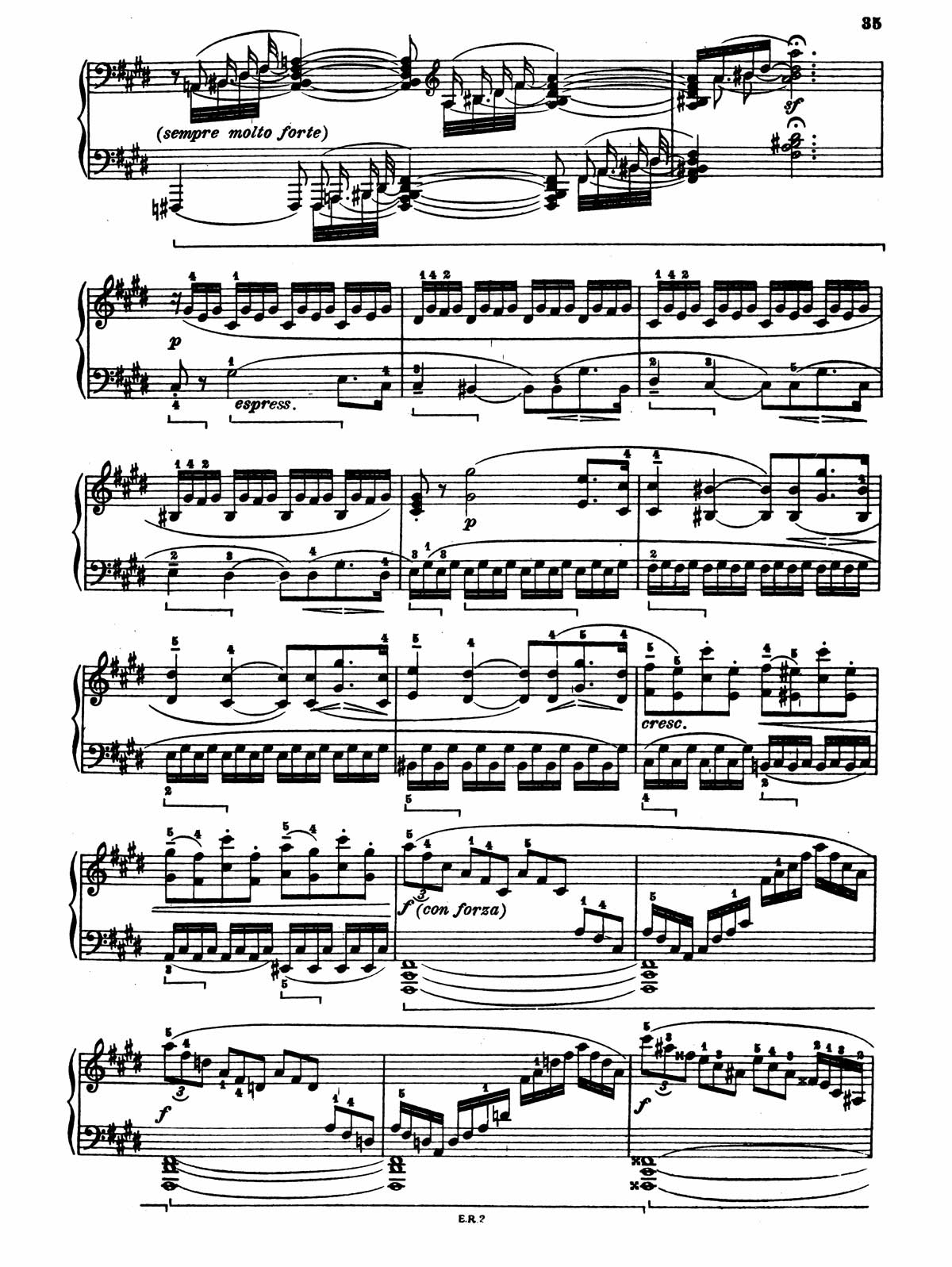 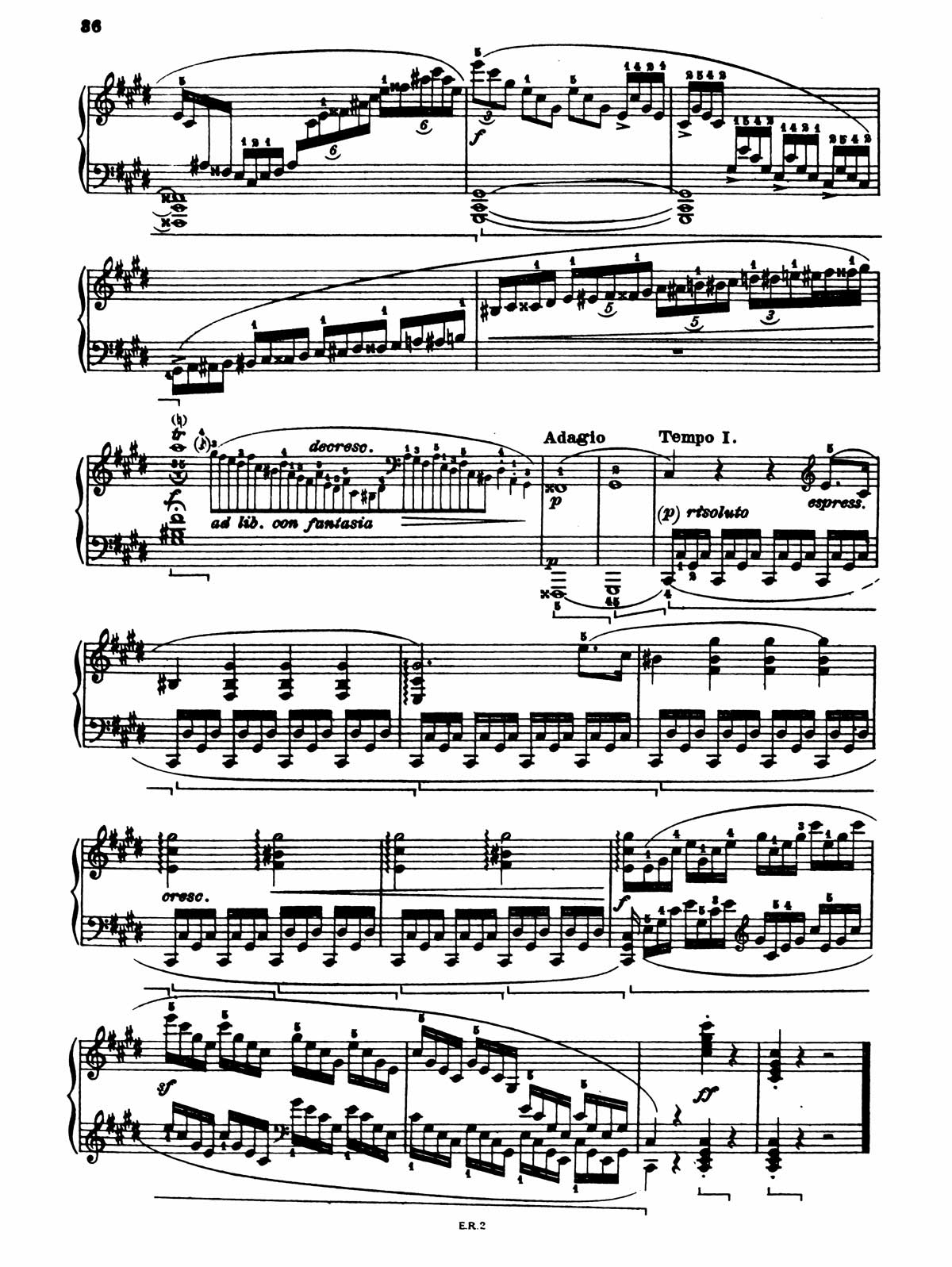 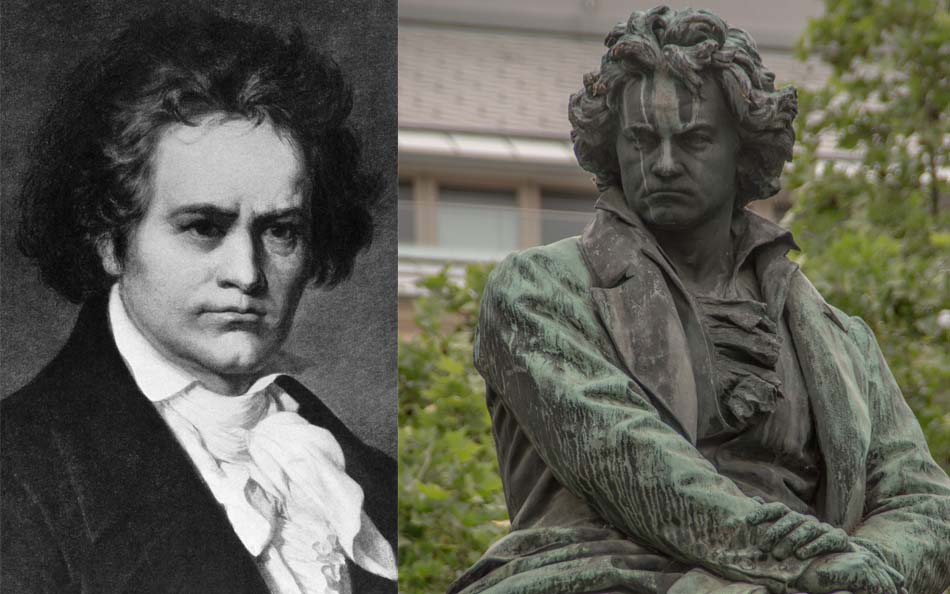 Composed between 1801 and published in 1802. Popularly known as "Moonlight"   (from German: Mondscheinsonate). Although in reality the first movement is a funeral march.

The damigella or young lady to whom the dedication referred was his student, the 17-year-old Countess Giulietta Guicciardi1 and with whom he was said to be in love. She was the daughter of Count Guicciardi, a Triestine character who in the spring of 1800 had been transferred to Vienna as an advisor to the Bohemian Chancellery. The family was related to the Brunswick, close friends of Beethoven, and the artist soon counted Giulietta among his aristocratic disciples, not accepting any remuneration for the lessons in which he was very demanding as a teacher. In those days the musician was approaching thirty years old. After some time, the teacher-student relationships developed into a warmer affection. This can be verified in his correspondence, since after a very melancholic letter written to Wegeler, the teacher addressed him another in which he said: Now I live happier. You will never be able to imagine the life so lonely and sad that I have lived in recent times ... This change is the work of an affectionate, a magical girl who loves me and whom I love. You can also read later : After two years I have again enjoyed a few moments of happiness and for the first time I think that marriage could make me happy, but unfortunately it is not my position and I cannot think of getting married.

In Giulietta's family there was opposition to her love affairs, and this seventeen-year-old girl with a weak or fickle will, very shortly afterwards, married Count Gallenberg, who was an amateur musician who wrote rather mediocre ballets. The rupture between Giulietta and Beethoven occurred immediately after the sonata was published, and the great artist bitterly wept over his disappointment.

The nickname Moonlight would become popular after the death of Beethoven, arising from a comparison that the German poet and music critic Ludwig Rellstab made between the first movement of the work and the Moonlight of Lake Lucerne. 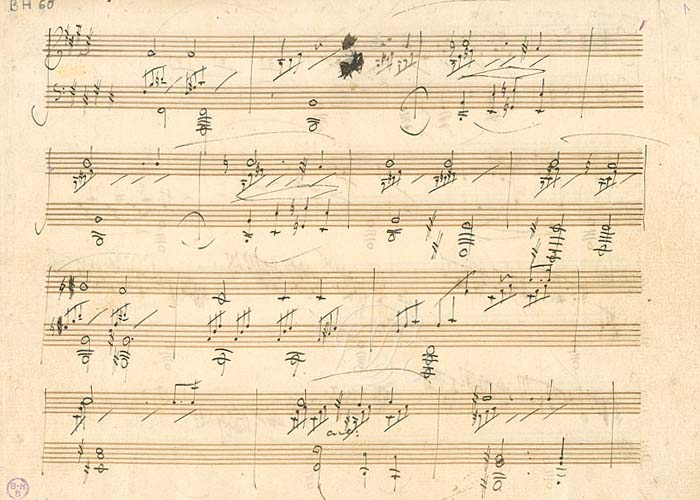 The Moonlight Sonata by Beethoven (which really should be known as the Second Fantasy Sonata) is probably the most popular part of Great World Music, and for good reason. His peculiar brand of expressive and imaginative power is unrivaled in piano literature. The first movement is one of those rare things that, like Bach, is almost totally insensitive to all kinds of interpretive freedom, depending on how you play it it can sound funereal, melancholic, lyrical or tragic.

Interpretive complexities abound in the first movement; Should the polyrhythm of sixteenth note against triplet be dealt with literally? Should the pedal be held down constantly as Beethoven indicates? Half pedal? Third pedal? Delayed Harmonic Shift Pedal? God forbid, the sostenuto pedal? Should we play at the indicated tempo, on the cutoff time, so that it goes almost twice as fast as some performances today, and certainly much faster than listeners are used to? And of course, there is the fact that the first movement is not really in sonata form, technically it is, but I can't imagine people actually hearing it as sonata form, and it develops more like a single fantasy melody. on a really massive scale.

The first movement actually in a funeral march. Touched and thought that way, everything makes sense. Let's just look closely at the beginning; the sustained arpeggios, the slow bass and up the notes that mark the march: G# 3/4 beat, G# 1/4 beat, again G#. What does it sound like? That's right, to a funeral march!

On the contrary, this first movement loses a lot of meaning if we want to force to sound like a romantic dinner with the light of the full moon . His execution becomes meaningless. Try it like a funeral march and you will see the difference.

The second move seems pretty conventional, but there's actually a lot of ironic joy with the ambiguities about where exactly the implicit rhythmic accents should fall, and even possible crossover rhythms in the trio. In any case, it is a sweet piece of the sonata, whose monomaniacal use of repeated cells of music manages to convey a kind of soft humor. Liszt called it a flower between two abysses.

The last movement is one of the miracles of piano literature; it vibrates in an almost perpetual state of climax, but rarely does its dynamics rise to a fortissimo. It is quite obvious to note that it is the main part of the sonata; Again, it is worth noting that Beethoven gradually shifted the weight of his sonatas from front to back. Your second thematic group is richly loaded with wonderful ideas. Most of the power of this move comes from its pulsing and insistent rhythm, there's a reason so many people enjoy technical metal like this; clever use of contrasts, almost ubiquitous vibrant sixteenth notes, and truly dramatic Neapolitan harmony - you could teach quite a few composition lessons using it as a model, but the bottom line is that it's amazing to listen to and quite addictive.