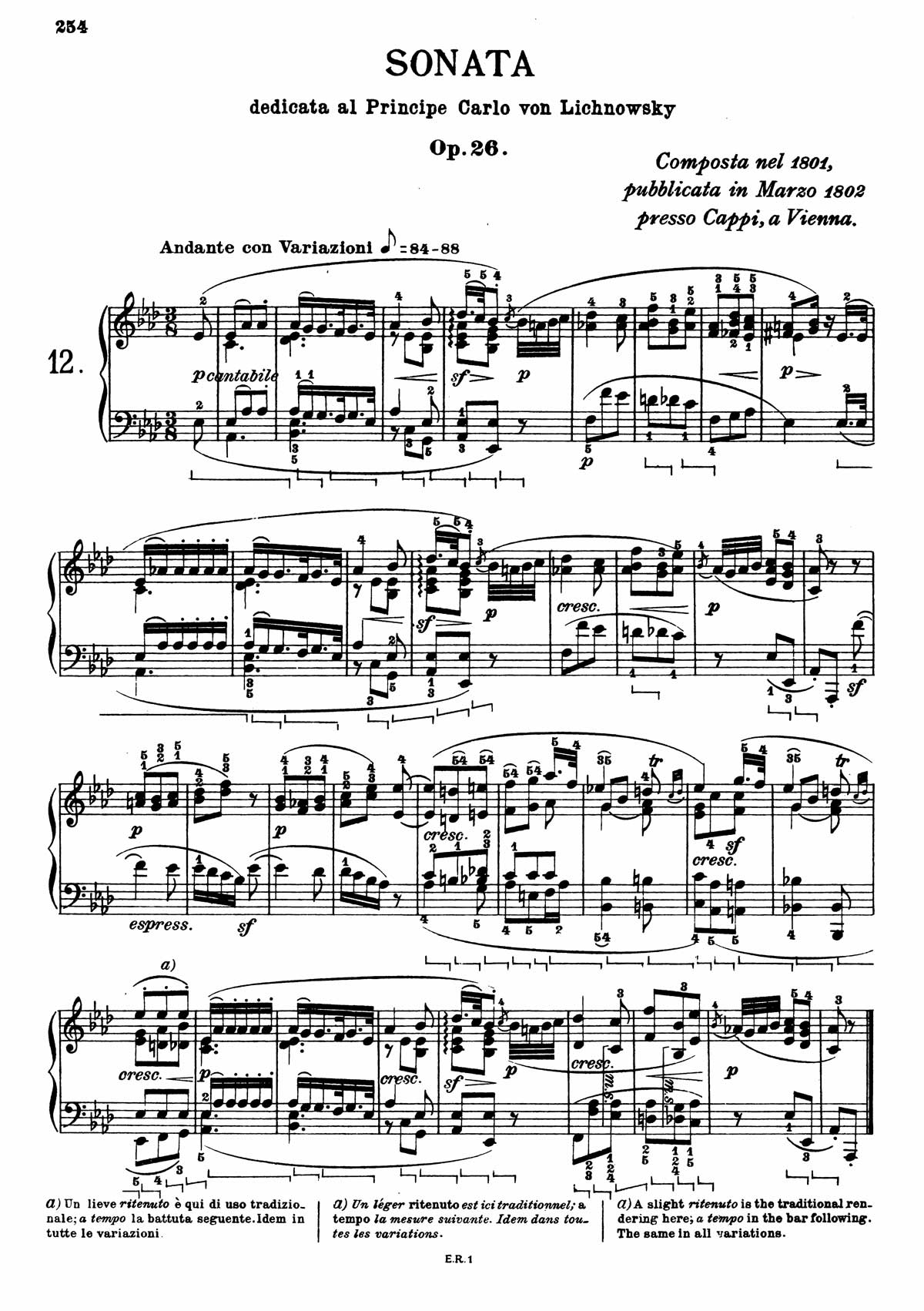 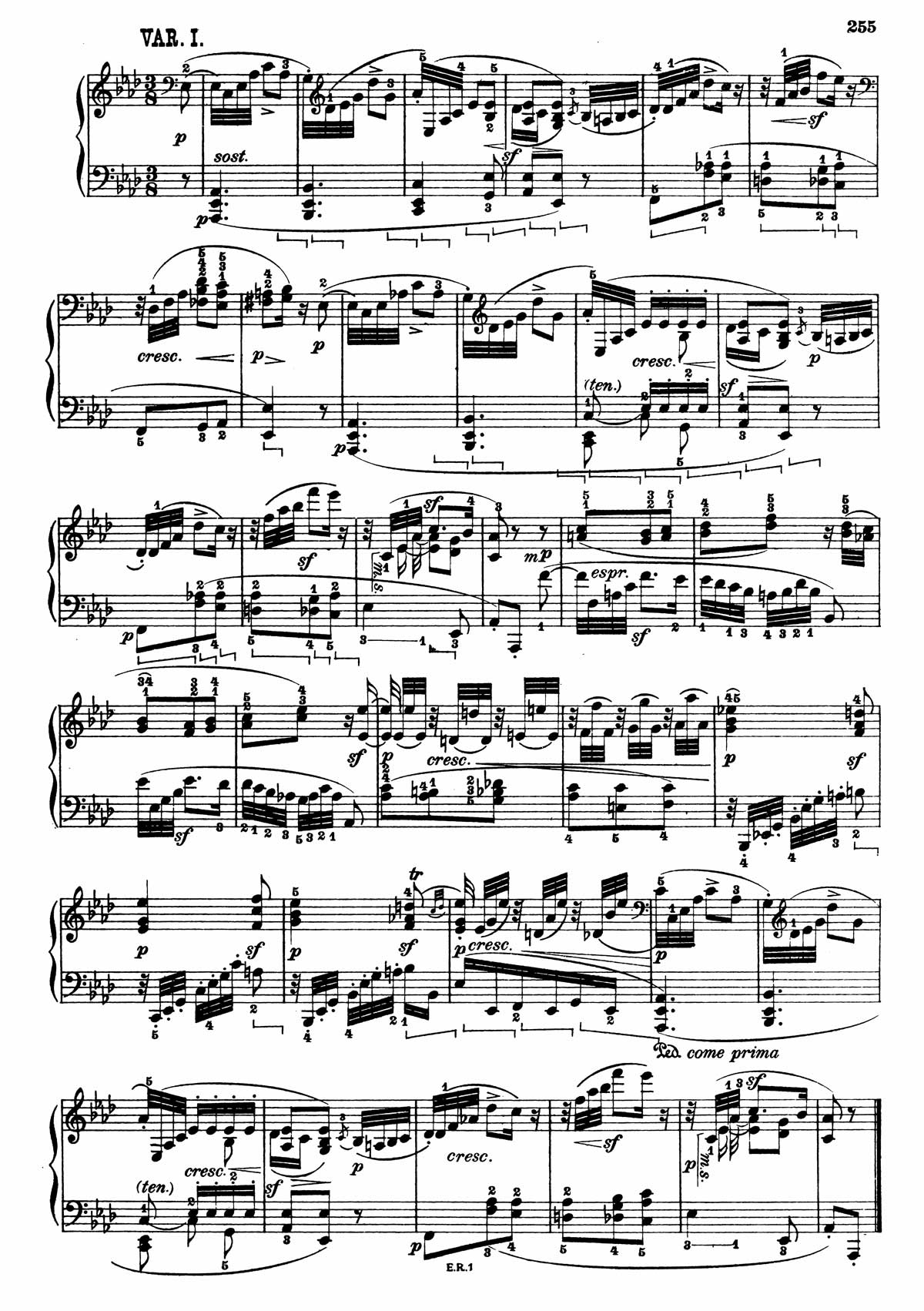 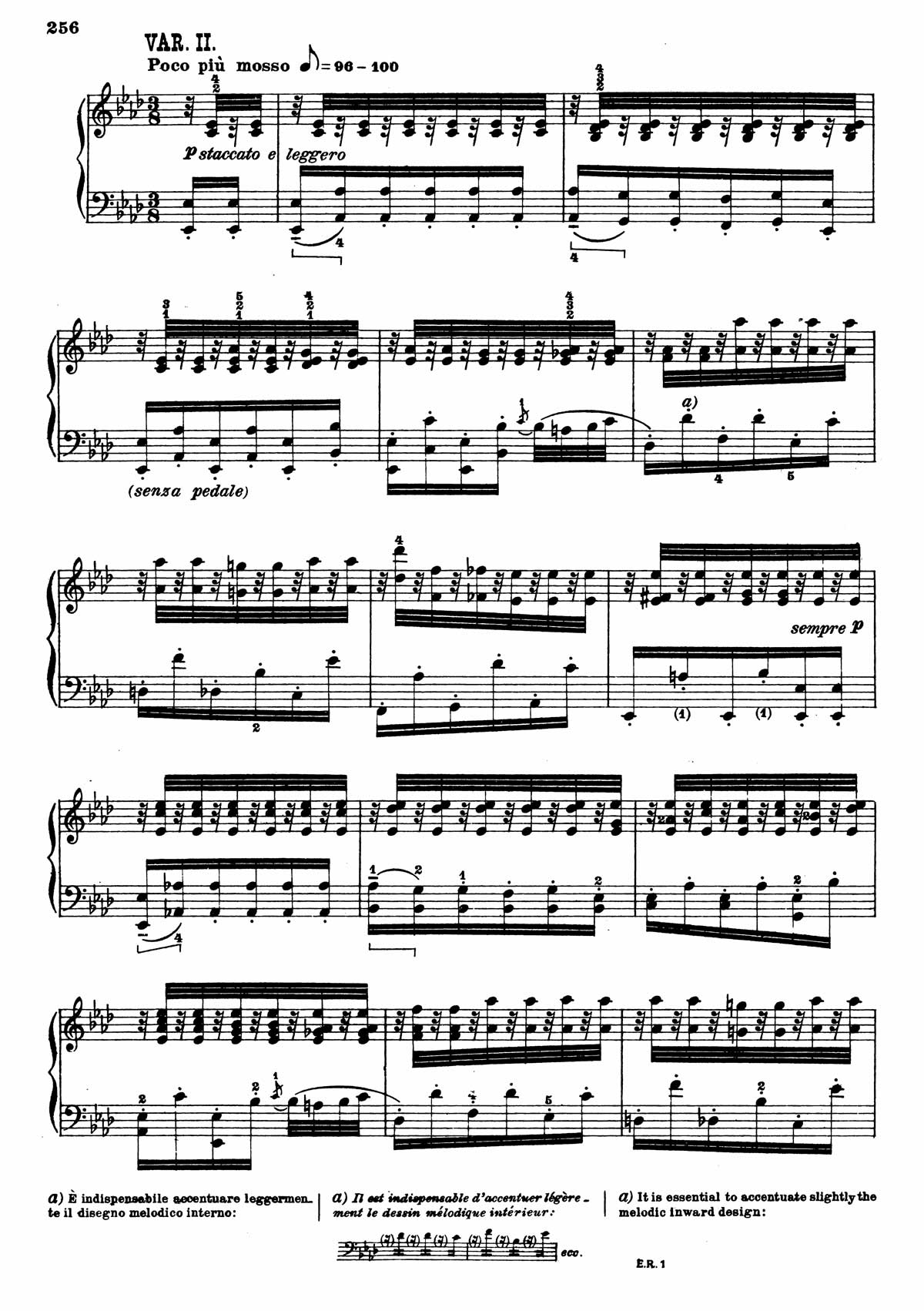 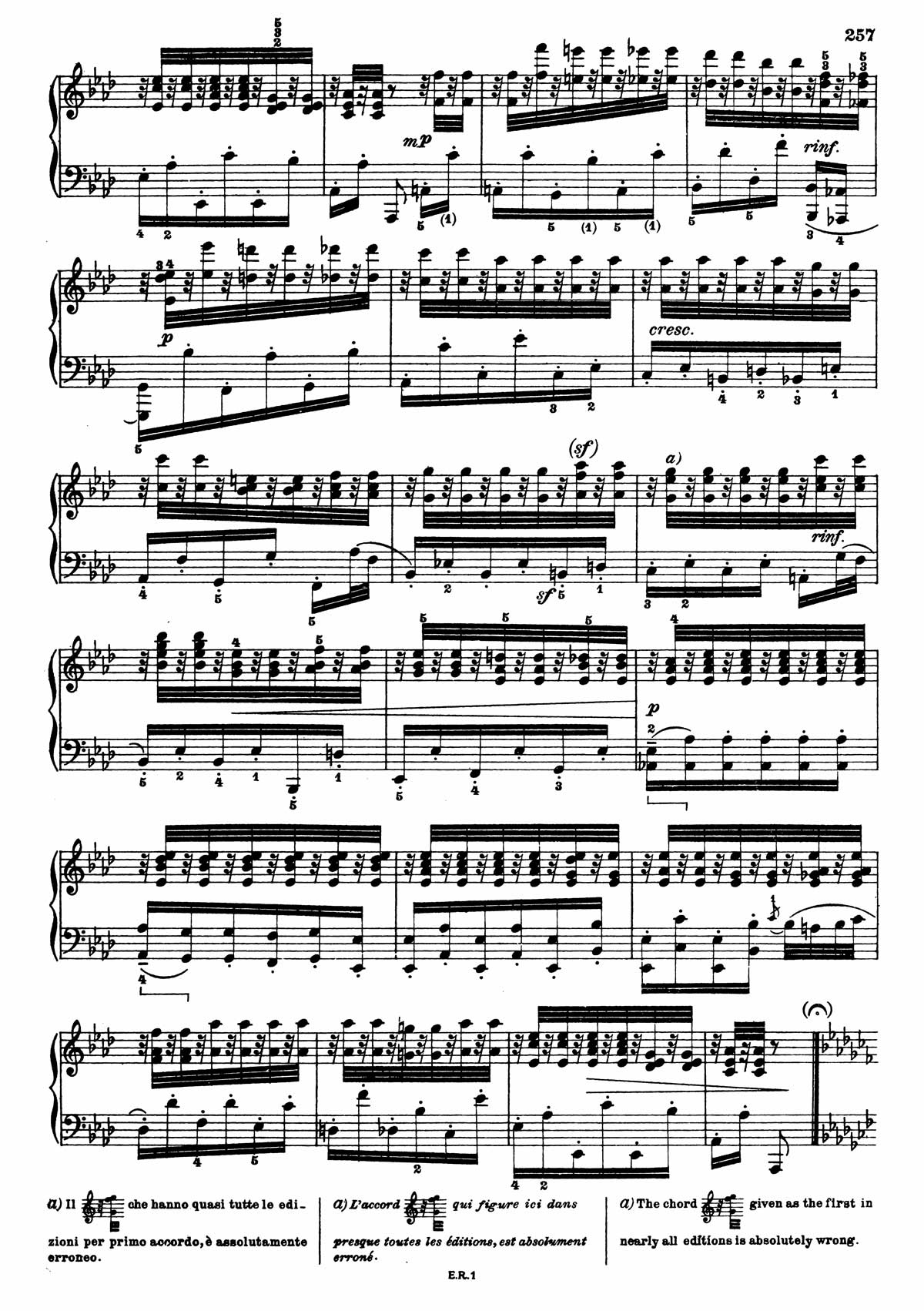 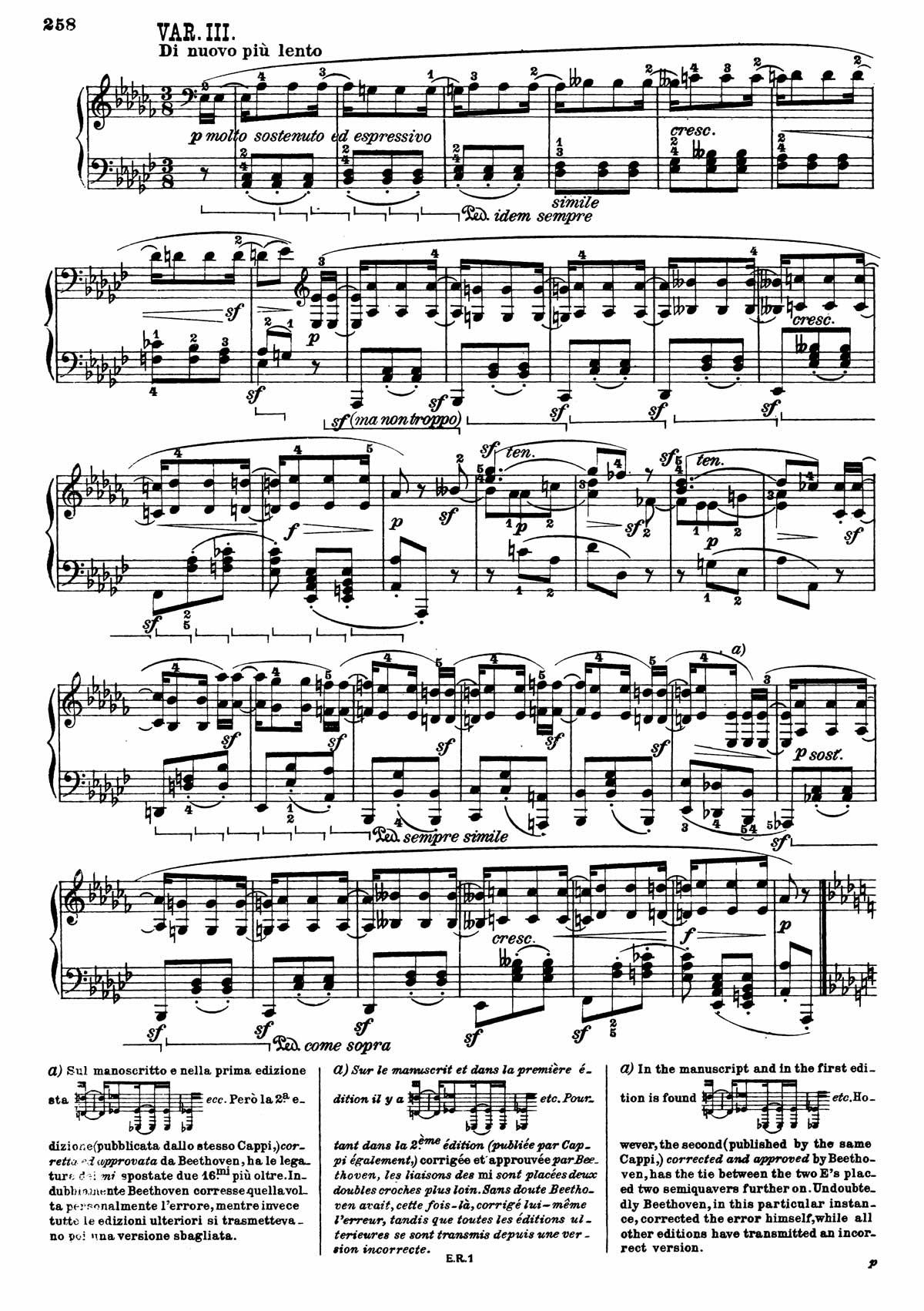 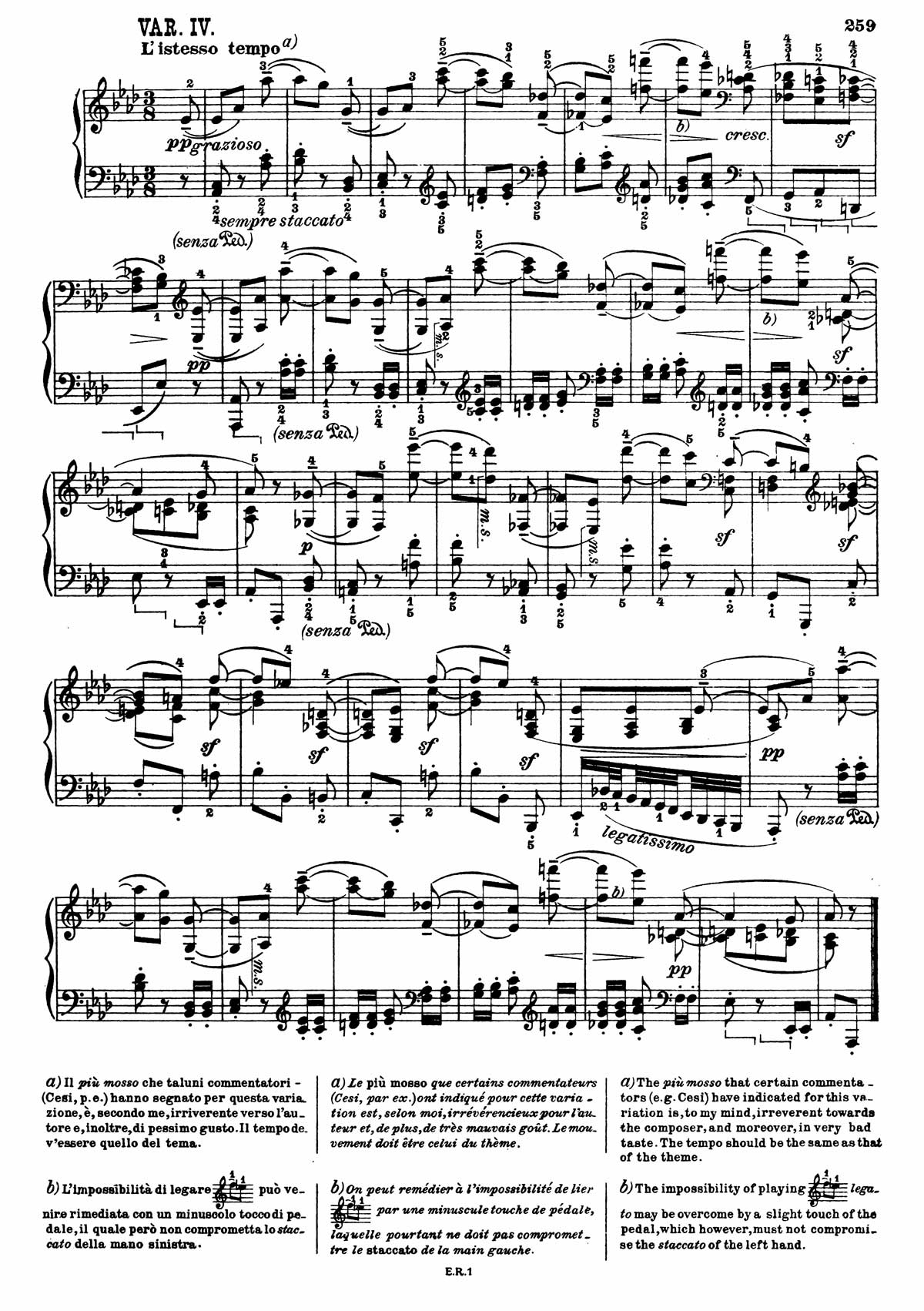 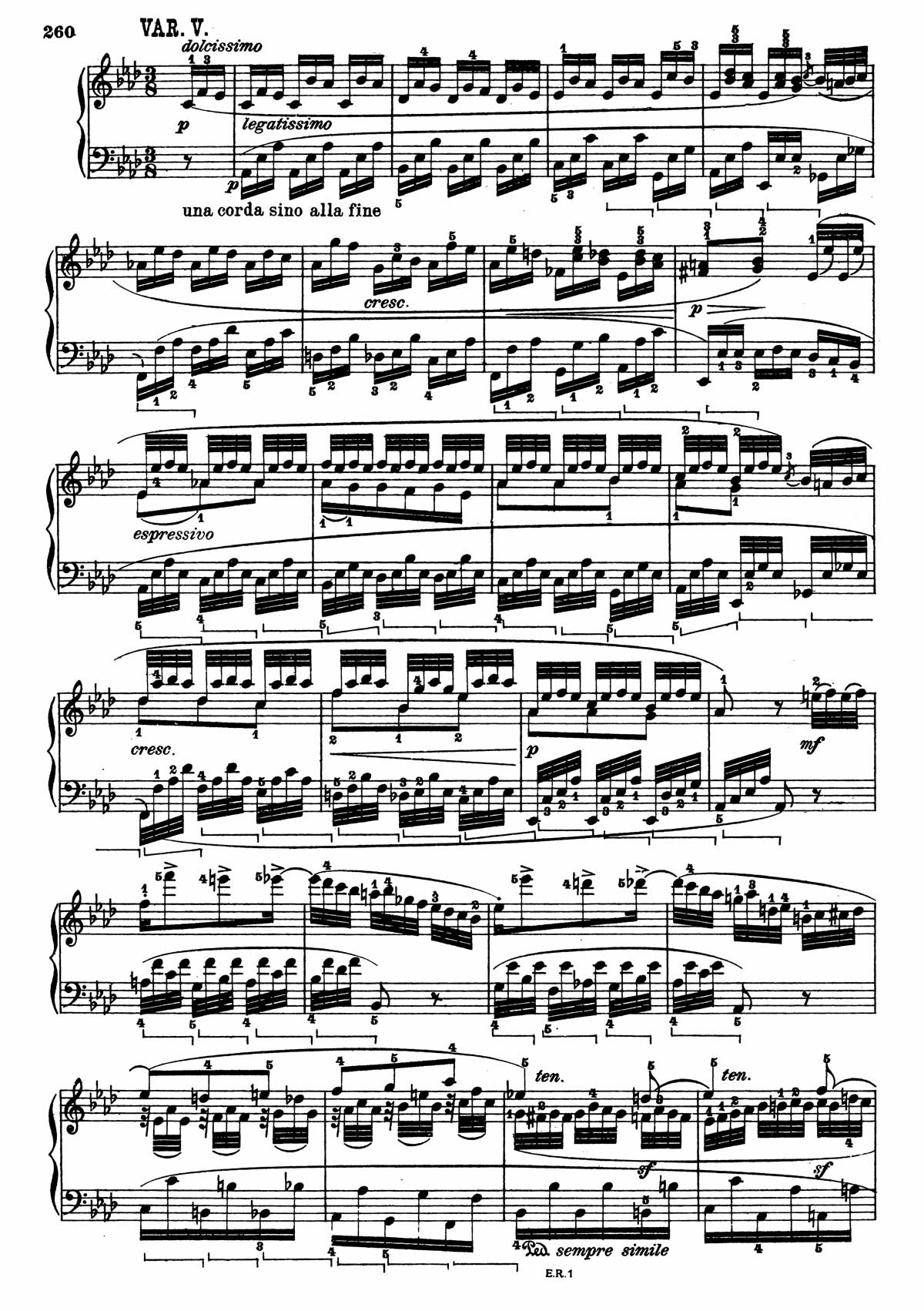 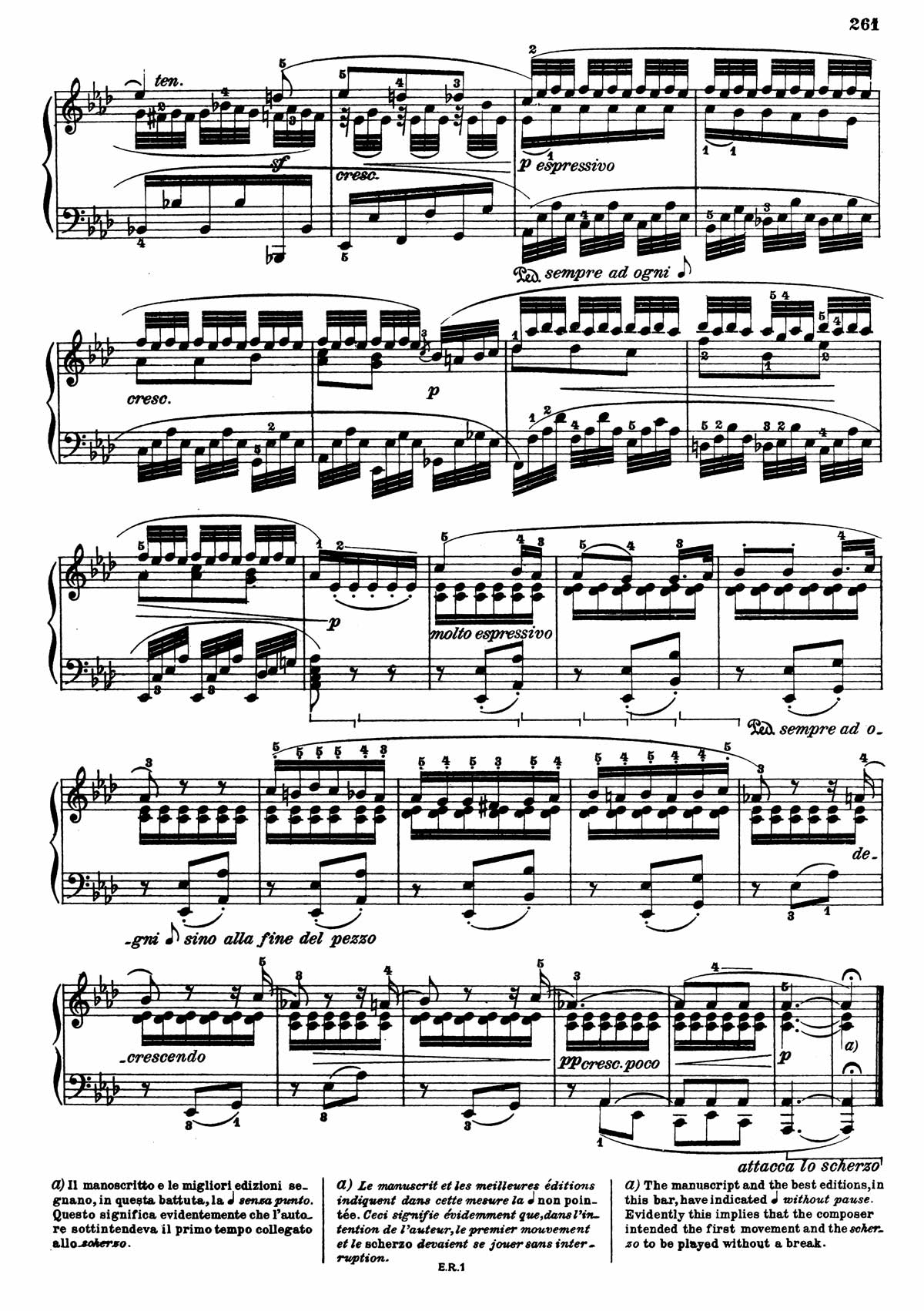 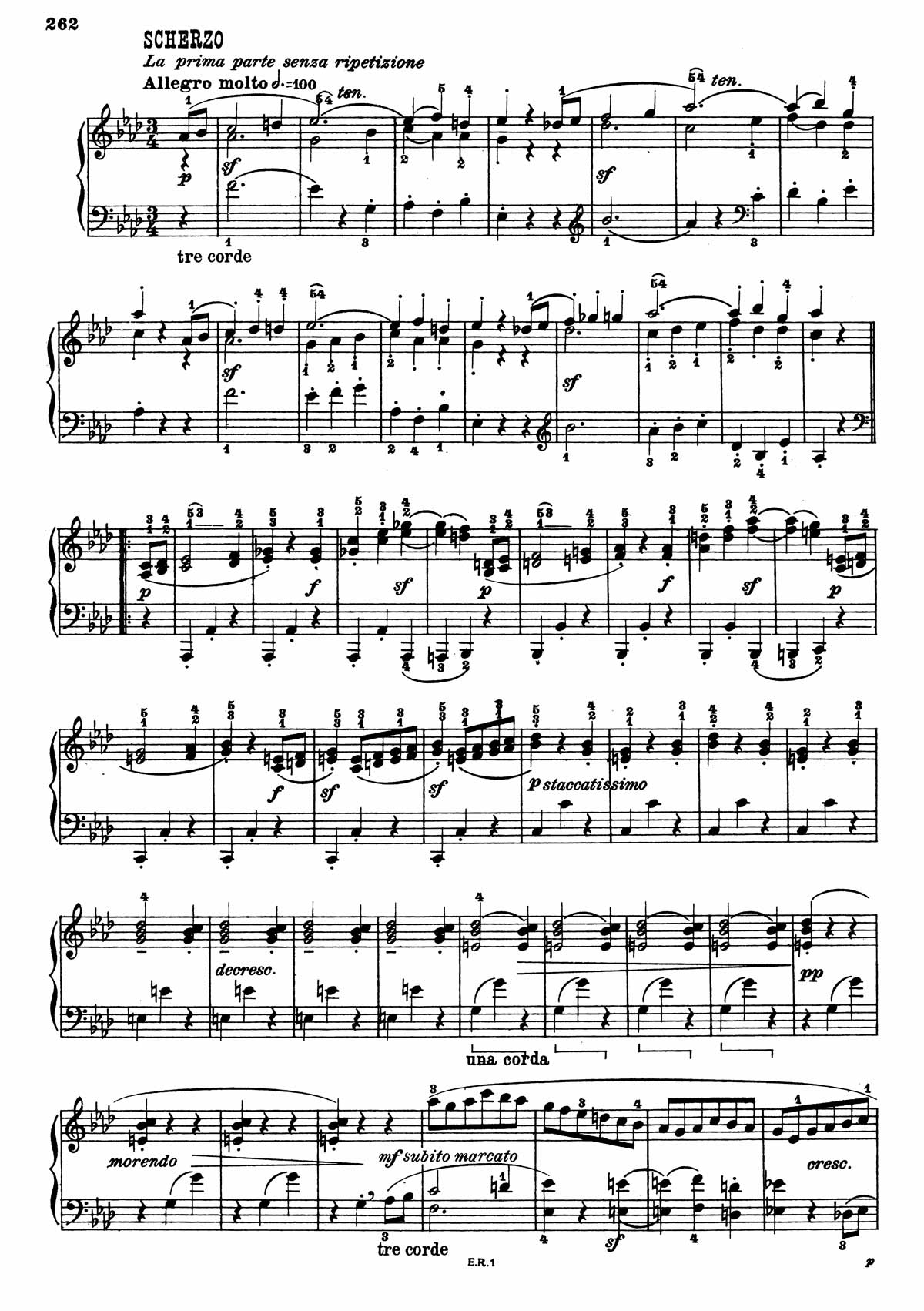 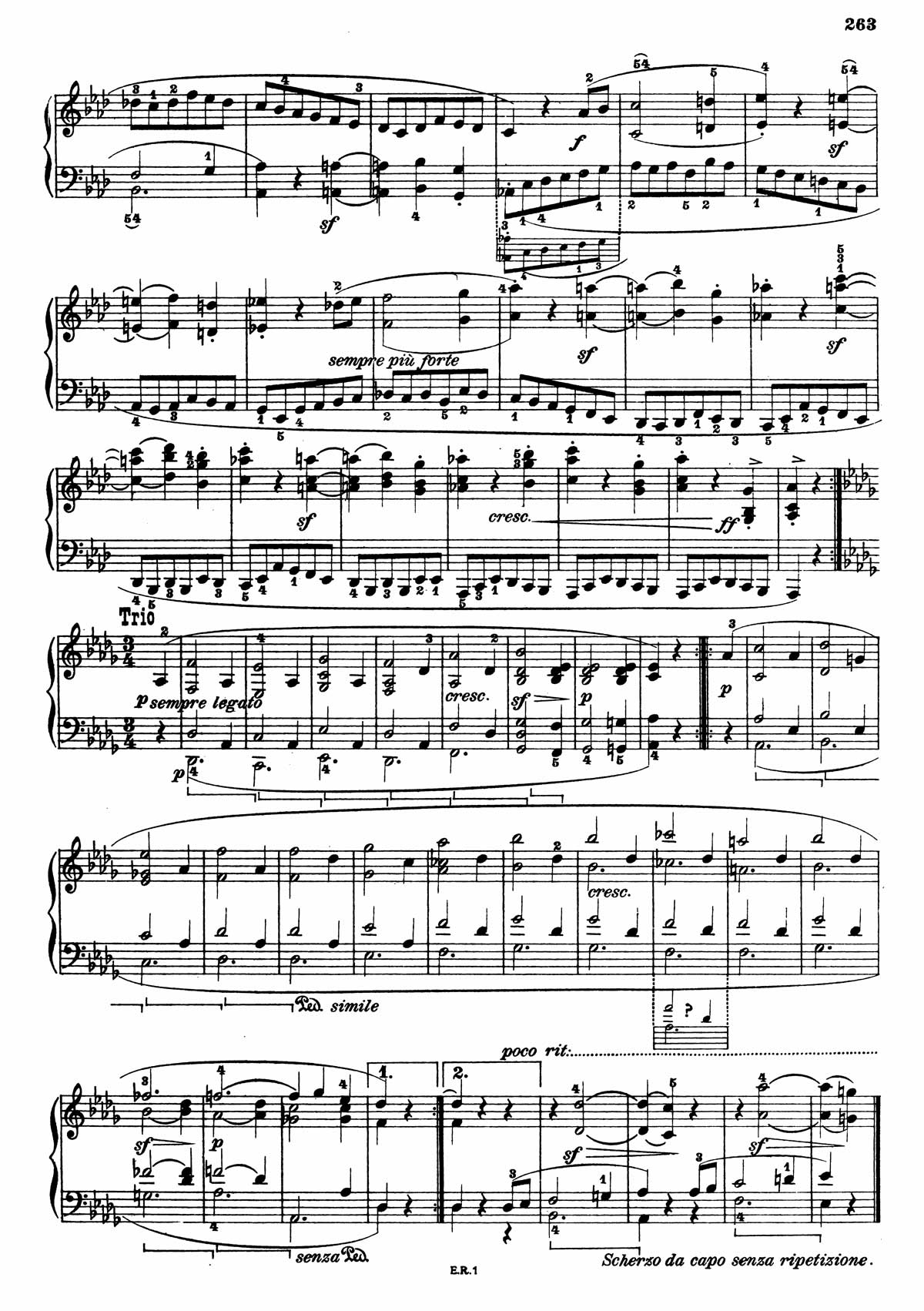 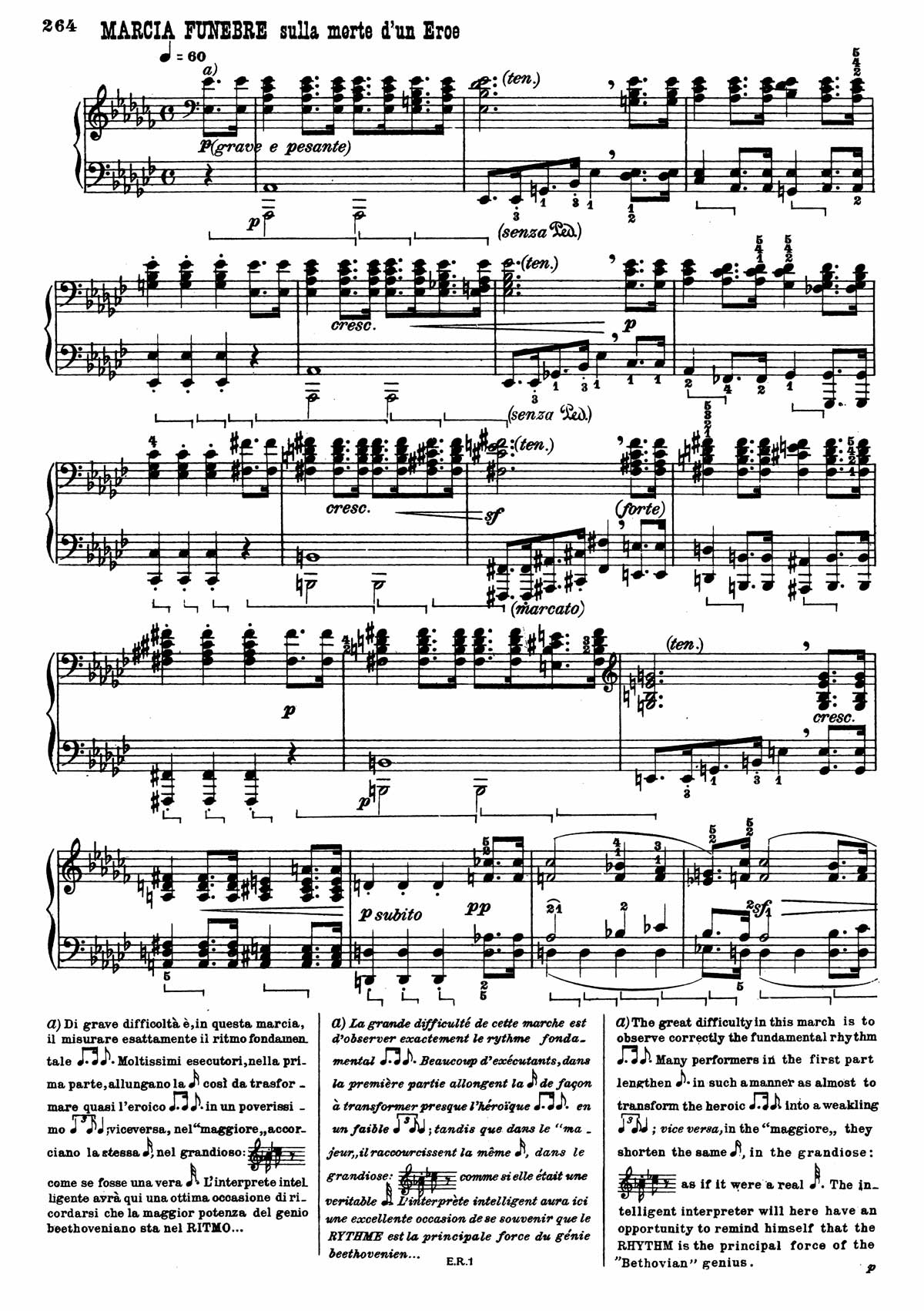 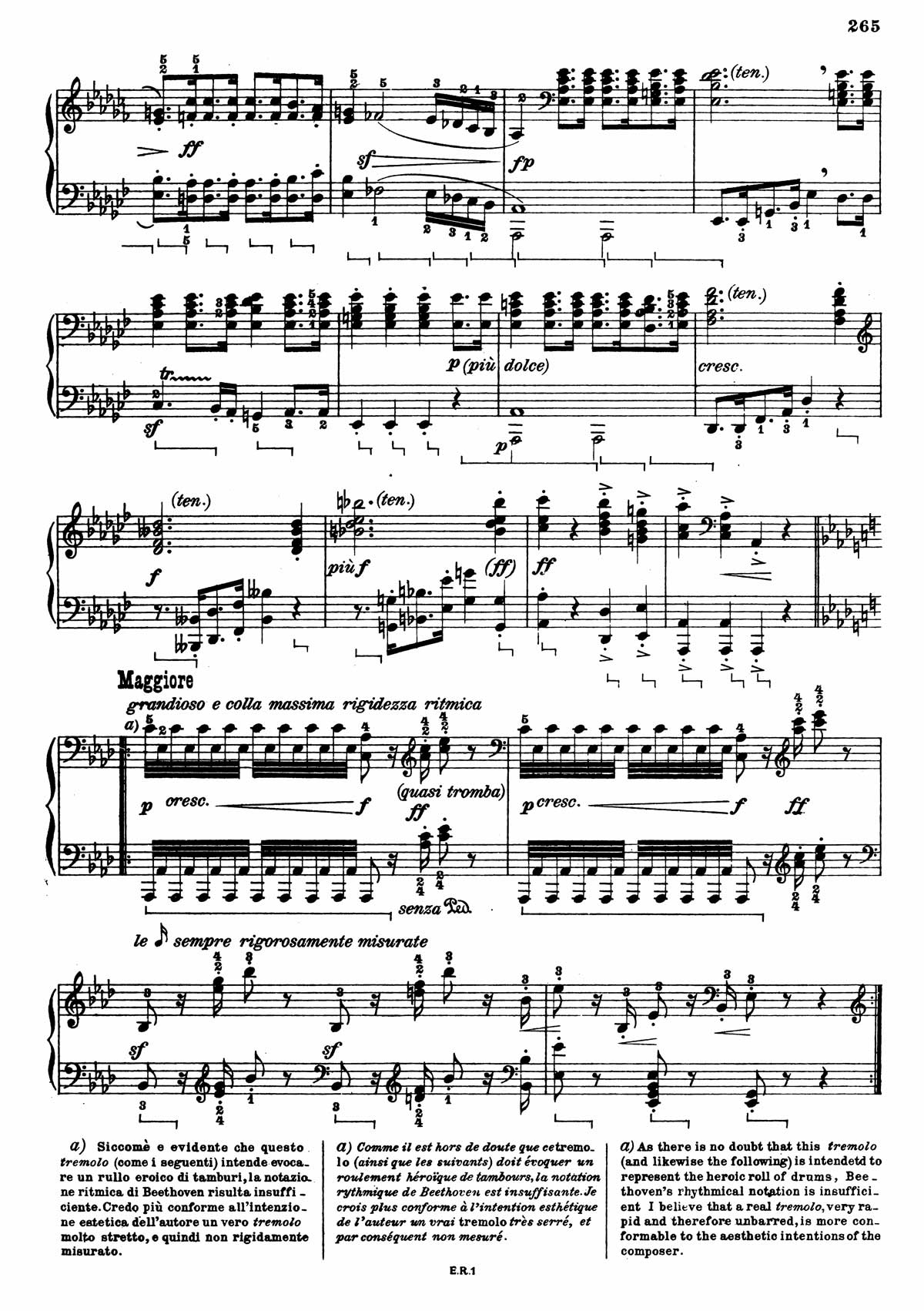 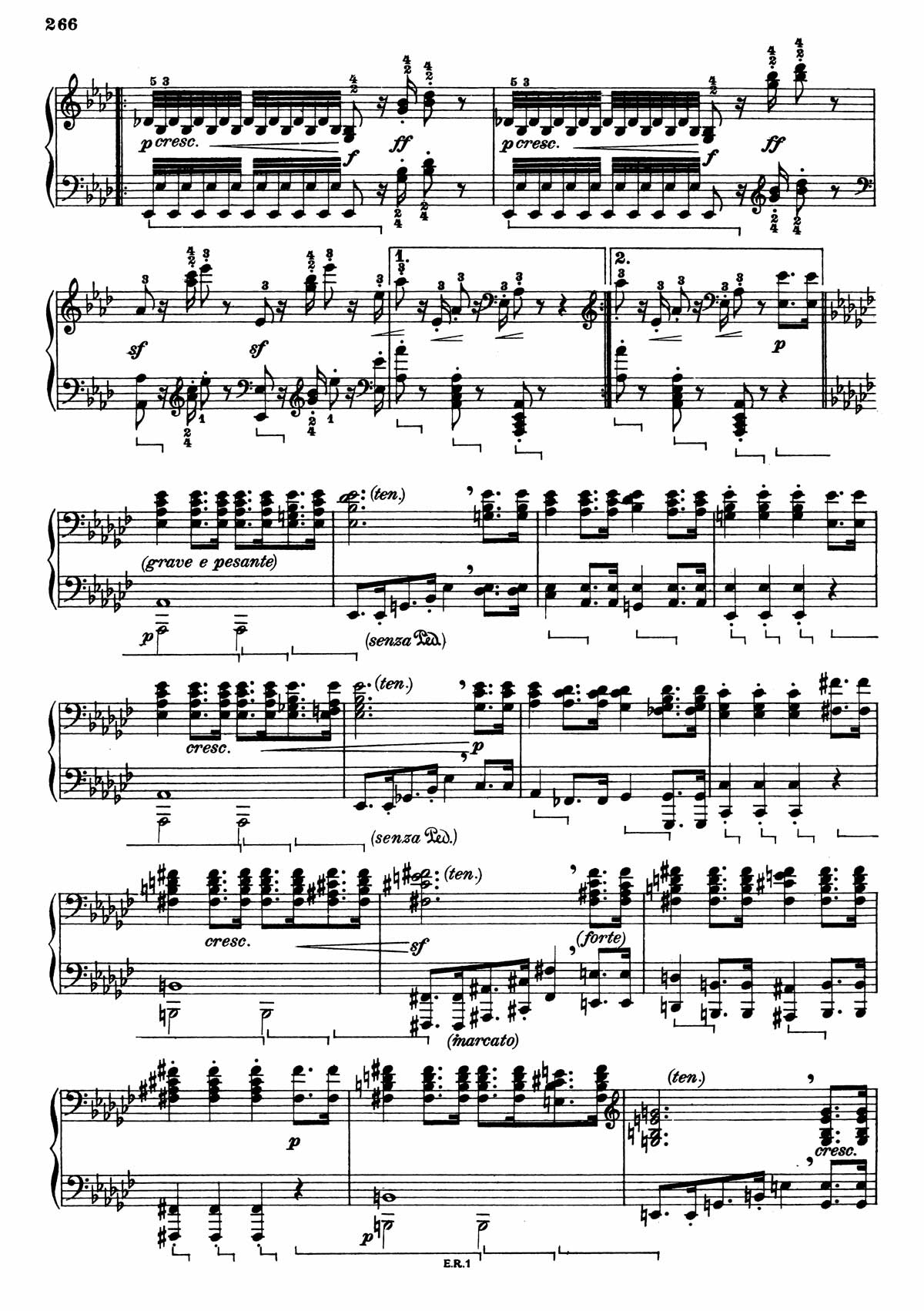 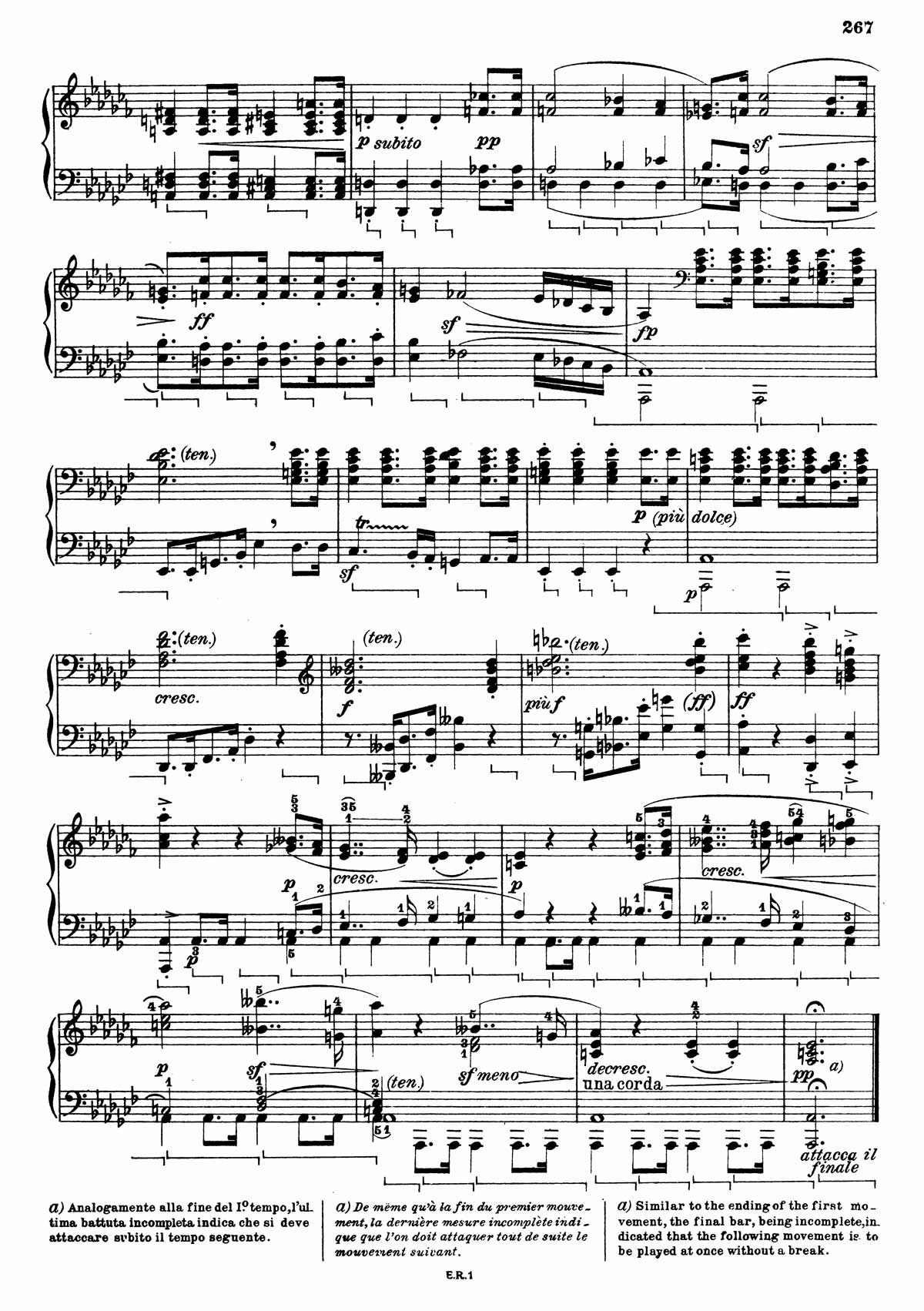 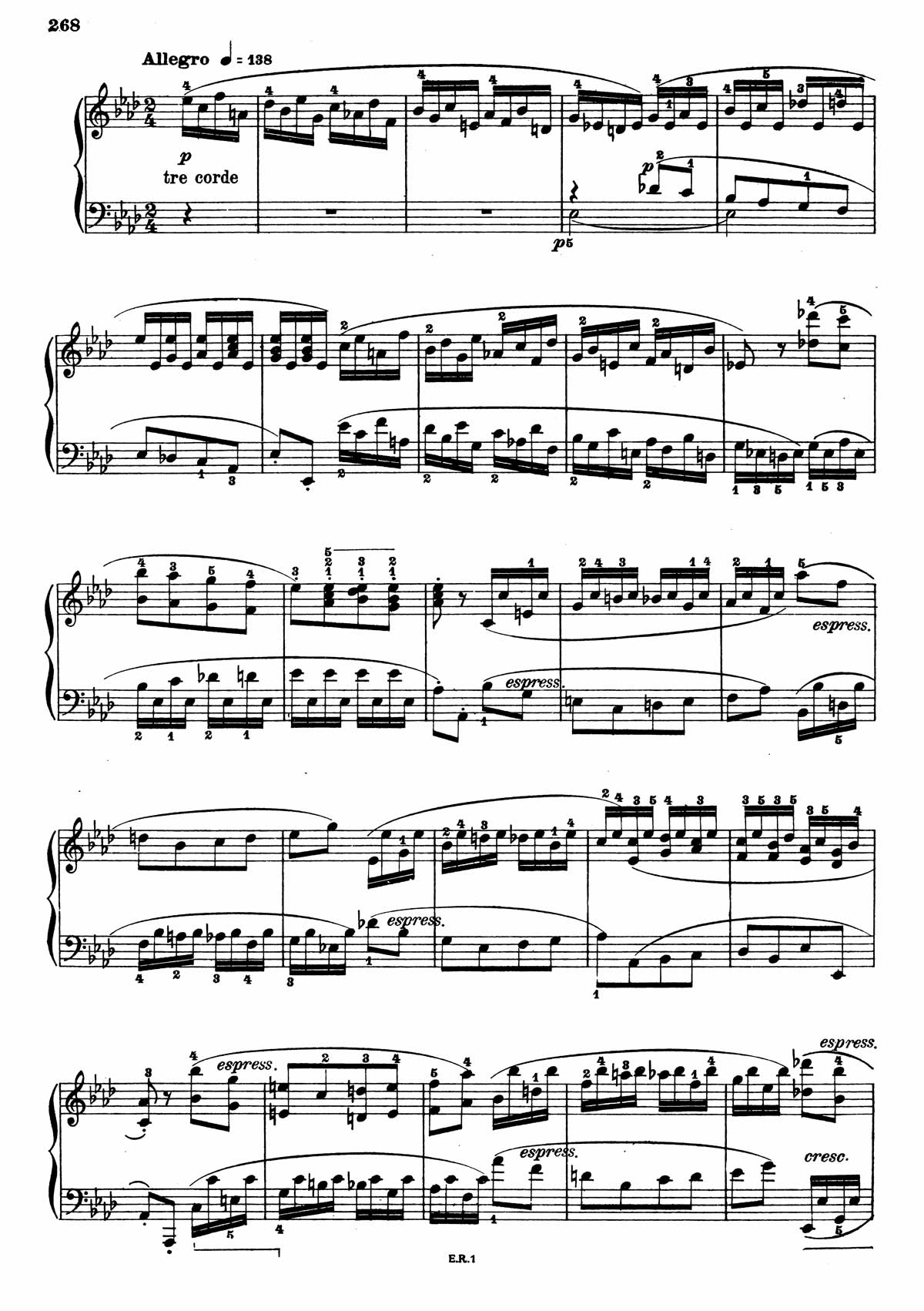 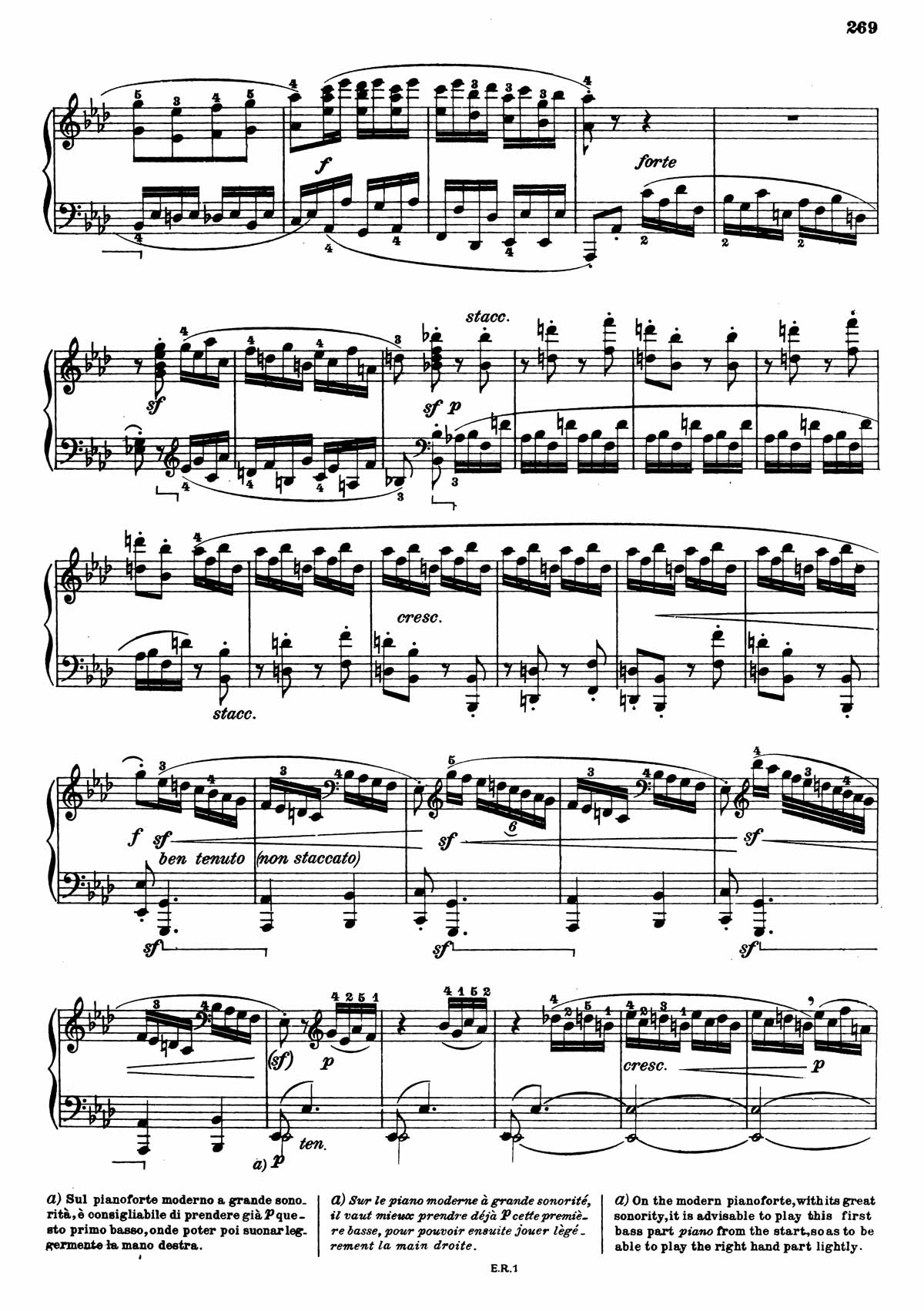 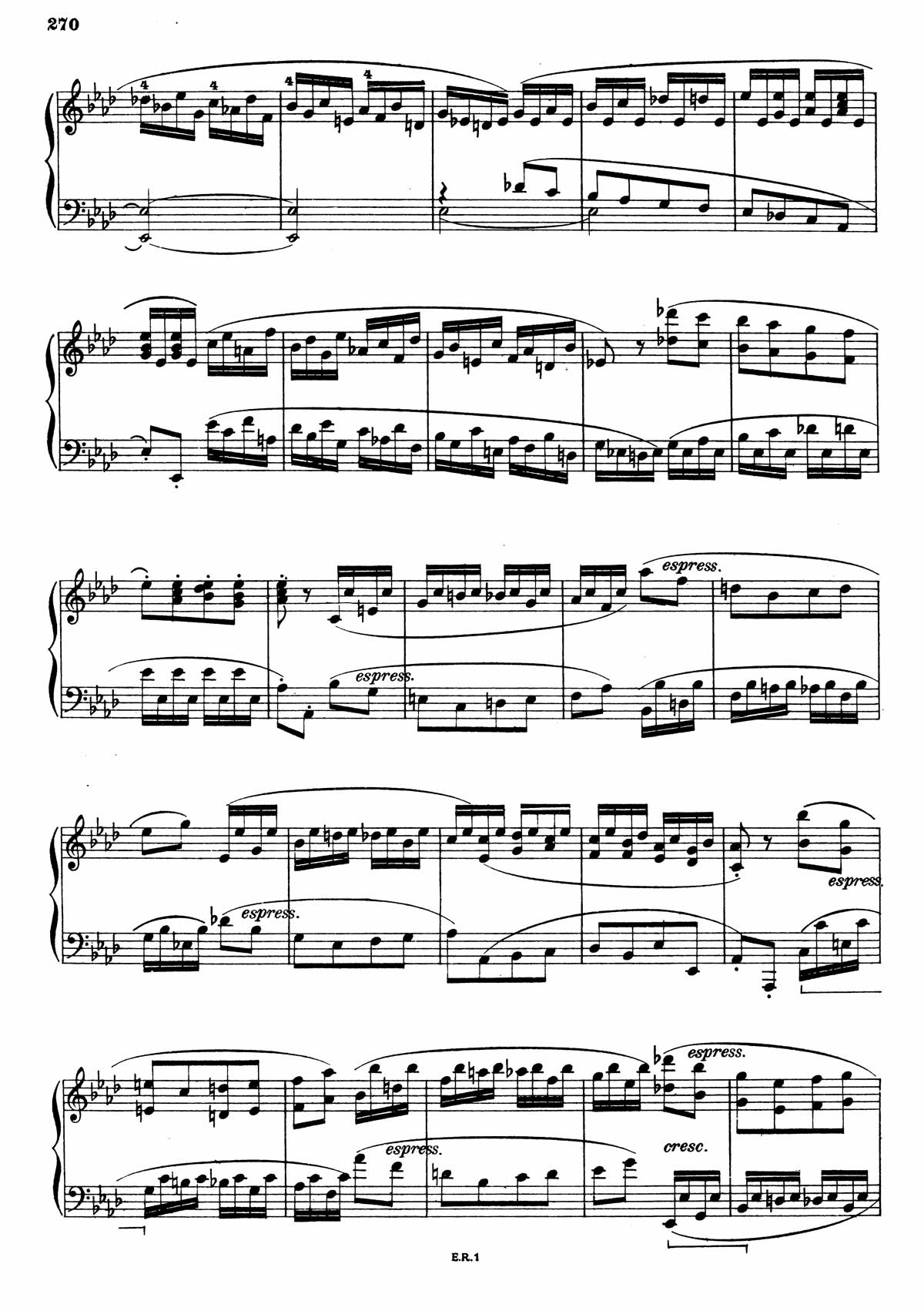 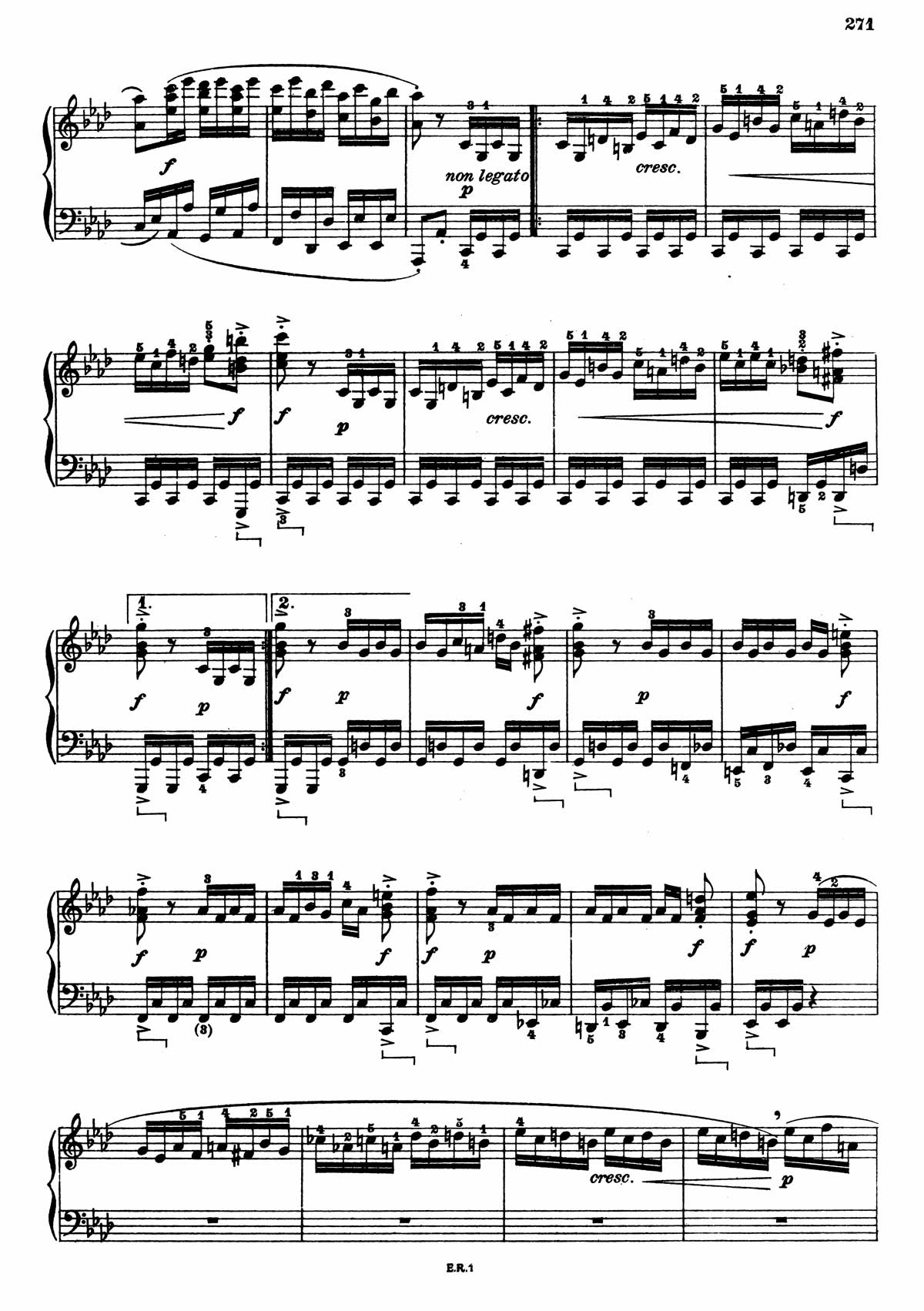 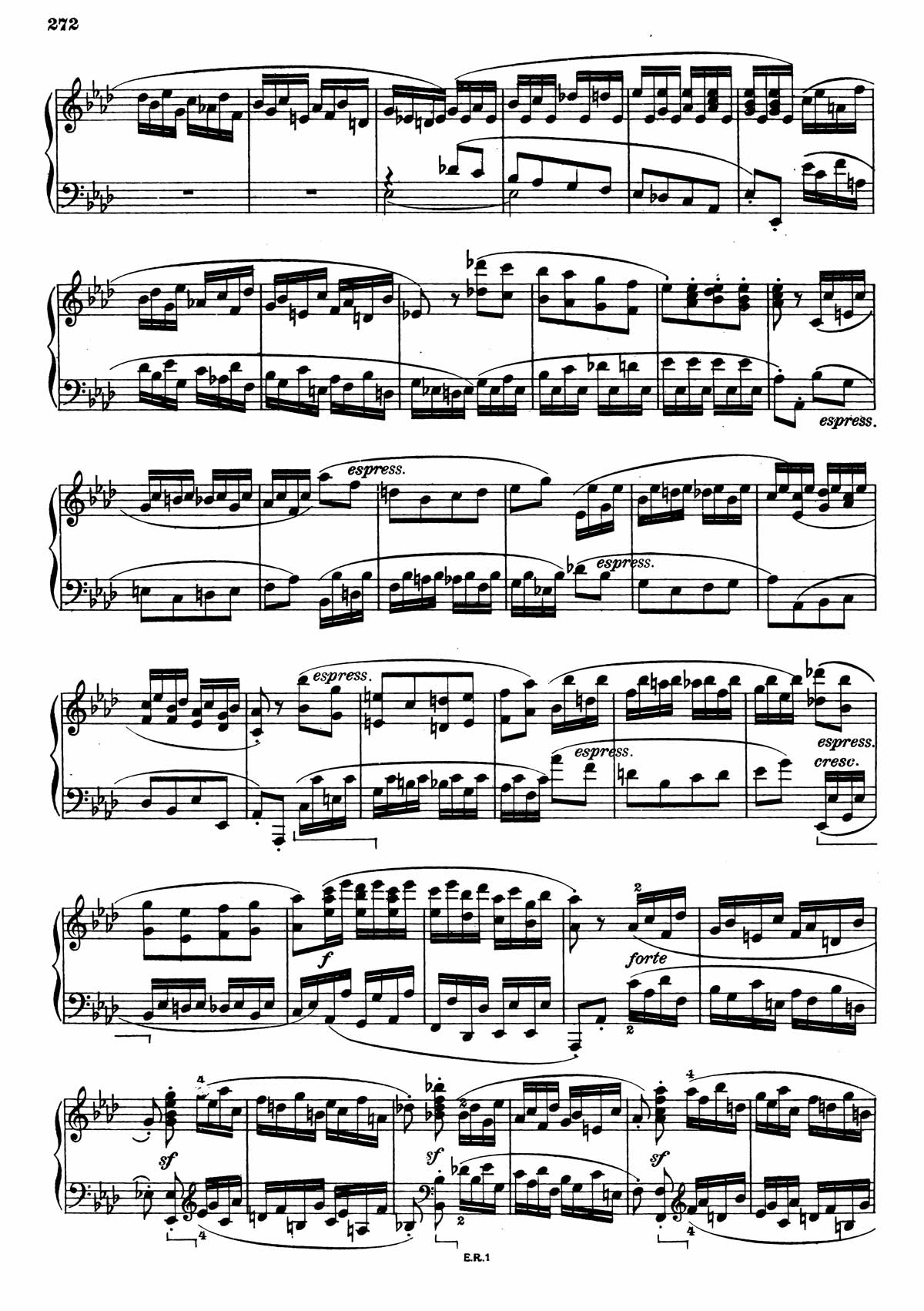 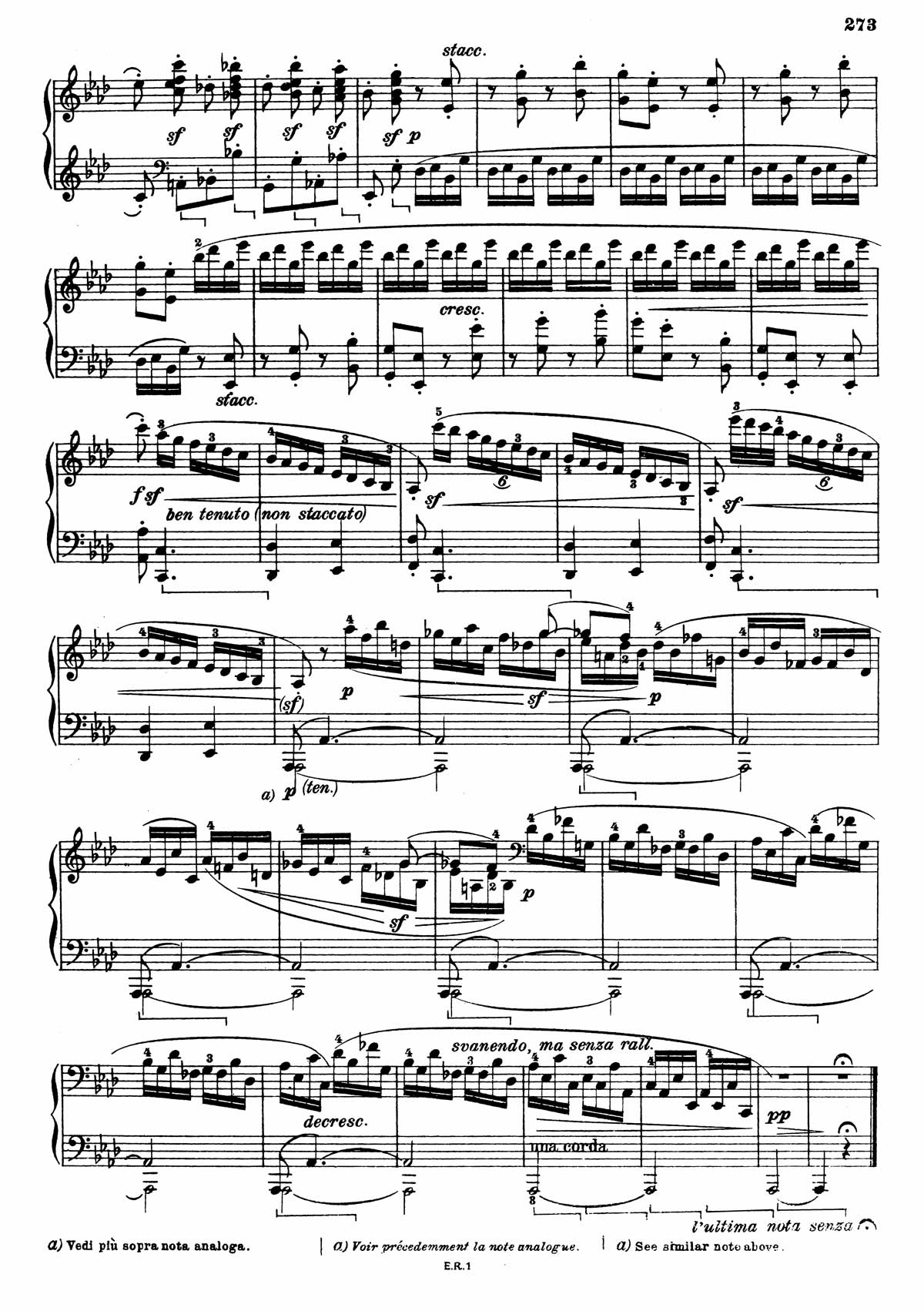 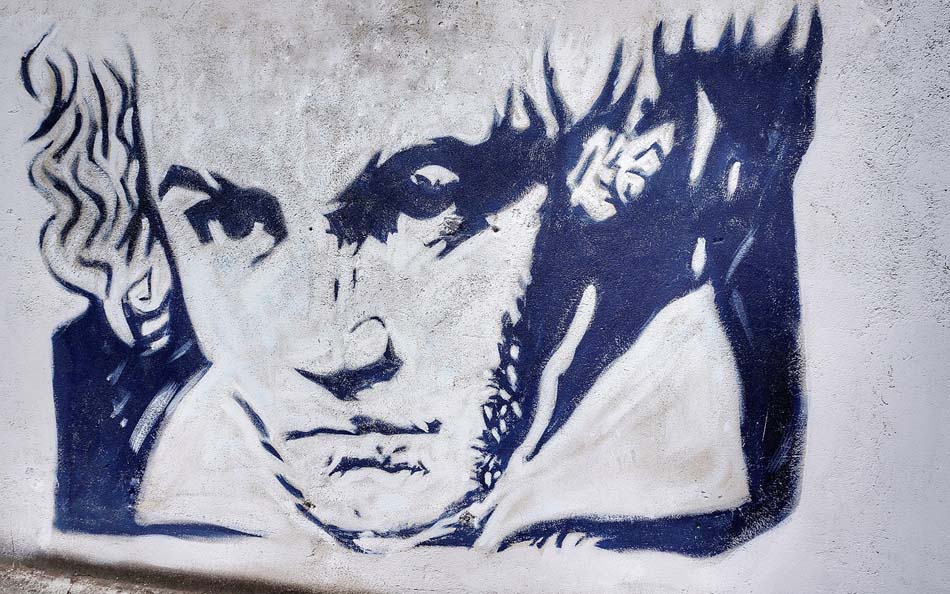 Composed between the years 1800-1801, in the same period that he completed his first symphony. Dedicated to Prince Karl von Lichnowsky, who had been Beethoven's patron since 1792. 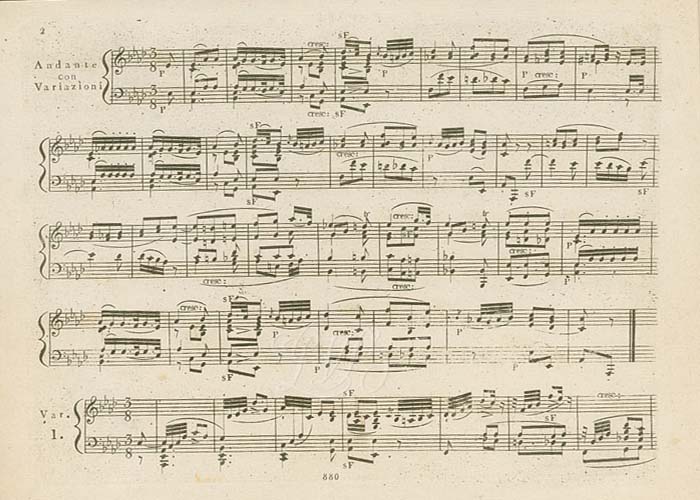 If you have been playing Beethoven's sonatas on the piano for a few years, you may have noticed that structural unity is something very characteristic of Beethoven. Their movements tend to be connected by all kinds of musical motifs, ties and affinities and backward glances, plus the boundaries between the movements become more blurred as we get to the late sonatas and the themes become more concentrated and abstract.

And there is this sonata, in isolation if we look at the others. It's not just that it doesn't have sonata-like movement; is that the first movement is in the form "Theme and Variations". Lacking literally any tonal tension, it is as far from the sonata form as possible. And the theme, which in Beethoven is generally designed to be a kind of rich mine of developing and evolving musical motifs rather than something attractive in its own right, here in this sonata we find it simply beautiful. . And so, all the advancement in this movement comes only from the development and elaboration of the subject, nothing more.

The four movements are not linked by reason at all. The first movement is related in a way to the rest, since it contains the outlines of the entire structure of the sonata; the theme and Var.1 are the first movement, the mischievous Var.2 is the Scherzo, the tragic Var.3 the funeral march, and the "ecstatic gracious lyric" Var.4 the ending. The point is that this sonata works because its movements are different, not because they are similar, a rather extraordinary conception of what a sonata can be. The calm of the first movement is erased by the scherzo, with his silly passing pretensions in F minor. Then a funeral march erases any attempt at joviality, and the finale comments with a certain irony on the clumsiness of the march.

Biography of Sonata No. 12

Beethoven's professional life in Vienna flourished, as the composer wrote in a letter to his friend Franz Gerhard Wegeler (1765-1848), dated June 29, 1801: My compositions give me a lot; and I can say that they offer me more commissions than what I can do. Also, I can have six or seven editors, and even more, if I want them; people no longer reach an agreement with me, I say my price and they pay. Later, in the same letter, Beethoven revealed his distress at the first signs of hearing loss: but my ears keep ringing and buzzing day and night. I must confess that I lead a miserable life. For almost two years I stopped attending social functions just because it is impossible for me to tell people: I am deaf…. To give you an idea of this strange deafness, let me tell you that in the theater I have to get close enough to the orchestra to understand what the actor is saying, and that at a distance I cannot hear the high notes of instruments or voices. As for the spoken voice, it is surprising that some people have never noticed my deafness; but since I have always been responsible for distracting attacks, that is what they attribute to my difficulty in hearing. Sometimes I can barely hear a person speaking in a low voice too; I can hear sounds, it's true, but I can't make out the words. But if someone yells, I can't take it. God knows what will become of me.

The sketches of this sonata date from 1801. The announcement of its publication, together with the sonatas 13 and 14, were made by Giovanni Cappi (1765-1815) on March 3, 1802. Cappi had been with the publishing house Artaria when Beethoven published the first three onatas in this same publishing house. He (Capi) started his own company in 1792. The sonata is dedicated to Prince Karl von Lichnowsky (1761-1814). For more information about the prince, from click here: Sonata No. 8 Around 1800, the prince gave Beethoven an annual stipend of six hundred florins (believed which is about $ 2,000), it remained in force until at least 1805. This is Beethoven's first piano sonata for which the autograph is preserved.

This is the first of three experimental sonatas, the other two are Sonata No. 13 and Sonata No. 14. This work presents several important innovative concepts. None of the movements is in the Sonata Form, the usual form of the first movement being replaced by a theme and five variations. A notable predecessor of this structure is the K. 331 by Mozart. The order of the internal movements is reversed from that seen in previous works, a scherzo is presented as the second movement and the slow movement, a funeral march in this case, as the third. The reversal initiates a pattern that was followed by Frédéric Chopin in Opus 35 and 58, Alexander Scriabin in Opus 23, Sergei Prokofiev in the Opus 14, 82 and 103, Samuel Barber in Opus 26, and so on. Beethoven added a program element of the sonata in which the third movement is titled Funeral March for the death of a hero. This march was played at Beethoven's funeral, March 29, 1827, in B minor, orchestrated by Beethoven himself of an unrealized theatrical project. Several composers of the time wrote funeral marches with heroic references, including Luigi Cherubini (1760-1842), François-Joseph Gossec (1734-1829) and Etienne -Nicolas Méhul (1763-1817). Perhaps such an approach was a by-product of the French Revolution.

This is the first Beethoven sonata in which pedal indications appear, at the end of the first and fourth movements and in the funeral march trio.

The first and fourth movements give temporary prominence to the secondary dominant seventh of the supertonic, F major with a minor seventh to B ♭ minor, in the first movement this occurs in bar 17, the opening to the middle section of the song; in the fourth movement it appears as the underlying harmony of the opening broken string pattern. The second movement also opens with the supertonic of the dominant, a different inflection of mode but still a voicing based on F.

The first and third movements are connected by the use of the ♭ minor, in the third variation of the first movement and in the tone of the third. In both cases the melodic line is relatively static and uses a pattern of repeated notes.

A thirty-four bar theme is presented with no repeats on an AABA internal pattern. This pattern is followed throughout the variations.

A motif comprising rising arpeggios of thirty-second notes followed by two eighth notes is the basis for this variation.

The third variation is in the minor parallel, the ♭ minor, the same key as the third movement. This variation has a serious and authoritative tinge.

Funny pairing figures consisting of three eighths, the first two tied, form the basis of this variation. These appear constantly in different ranges of the piano generating contrasts.

The final variation introduces a written pattern trill, a device used in the last variation of the dinal movements of the Sonata No. 30 and Sonata No. 31. These written trills aid in an easy rephrasing of the theme with 16th note accompaniment patterns in the left hand. The trill is believed to be a musical gesture that symbolizes transcendentalism, an expression that is subtly suggested in this movement and more obvious in later sonatas, for example in the third movement of the Sonata No. 21.

A non-evolutionary coda consists of alternating between tonic and dominant harmonies. The pedal holds the weight of the sound in bars 216 to 219.

The first section A is accompanied by a note from Beethoven ordering it not to be repeated. The segment is written with a varied repetition of the material. The trio is in D major.

The outer sections are completely composed. the trio section consists of two parts, each one must be repeated.

Opening in A flat minor, the eight-measure main theme closes in C flat major, enharmonic in B major. A change to the parallel minor, B minor, marks the beginning of a reaffirmation of the main theme, this time ending in D major.

After a four-measure transition, the main theme returns to the starting pitch. A surprising change towards the parallel major, A major, at bar 25 is short, the section closes in a minor key.

Tremolos that appear to mimic drum rolls are accompanied by pedal markings. The pedal releases are precisely marked and match the autograph and first edition. Some editions show small but significant alterations. The use of tremolos may have been influenced by the pianist Daniel Steibelt (1765-1823), who was famous for the technique. Count Moritz von Fries (1777-1826) organized a contest between Beethoven and Steibelt in his Viennese home around 1800, after that meeting Steibelt did not fare well and decided to leave Vienna and never return. Mentioning Steibelt, he was one of the great pianists of the 19th century who left brilliant sonatas, piano methods and more.

The coda presents a pedal point in the ♭ on diminished sounds with a feeling of anguish that are resolved in A♭ major.

Czerny believed that this movement was influenced by the music of Johann Baptist Cramer (1771-1858), who created a great sensation when he visited Vienna and he played his three sonatas op. 23. Czerny pointed to the first of them, also in A ♭ major, for having been influential.

The movement is compact, presenting continuous sixteenth notes almost without interruption. The combination of a Funeral March followed by a perpetual motion movement is one that Chopin used almost four decades later in the Op. 35 sonata, which suggests possible influence, although the later movements differ in state of spirit.

The free counterpoint exchanges between the hands are in Sections A and B. The two sections B are in the dominant and the tonic respectively. The C section opens in C minor and consists of two eight-bar segments, the first marked to be repeated. In the end we have the coda. The last four bars are assisted with the pedal.