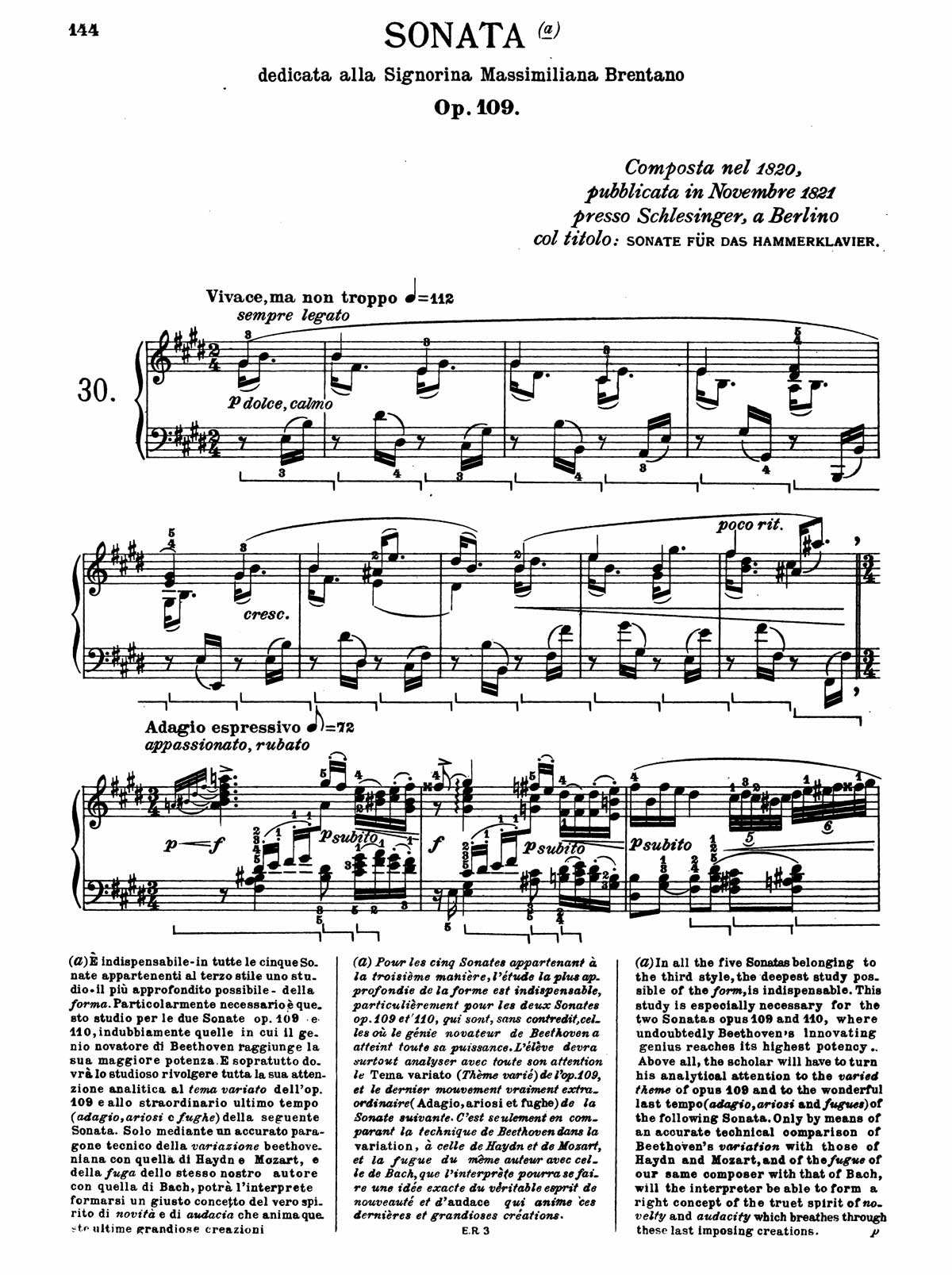 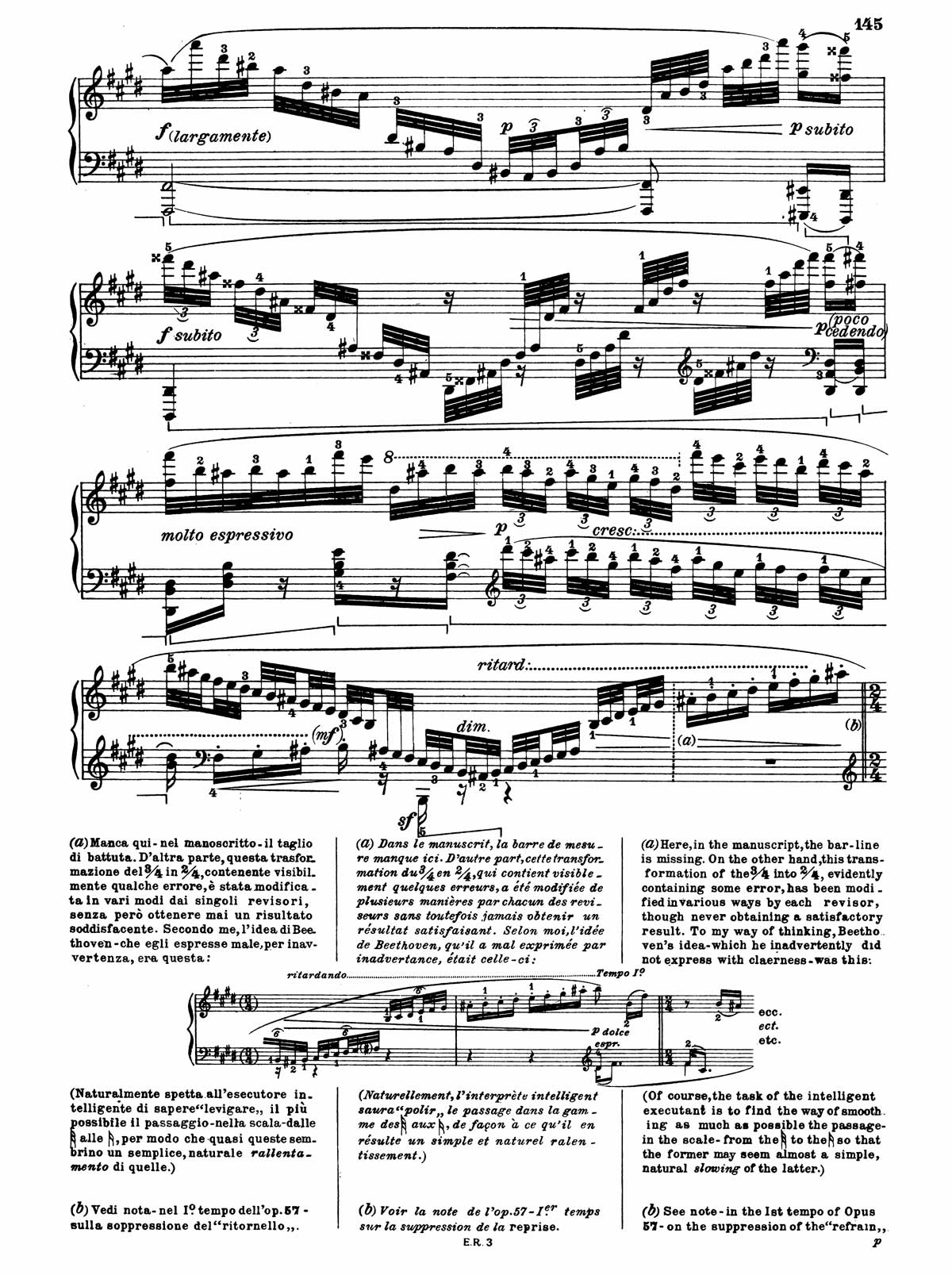 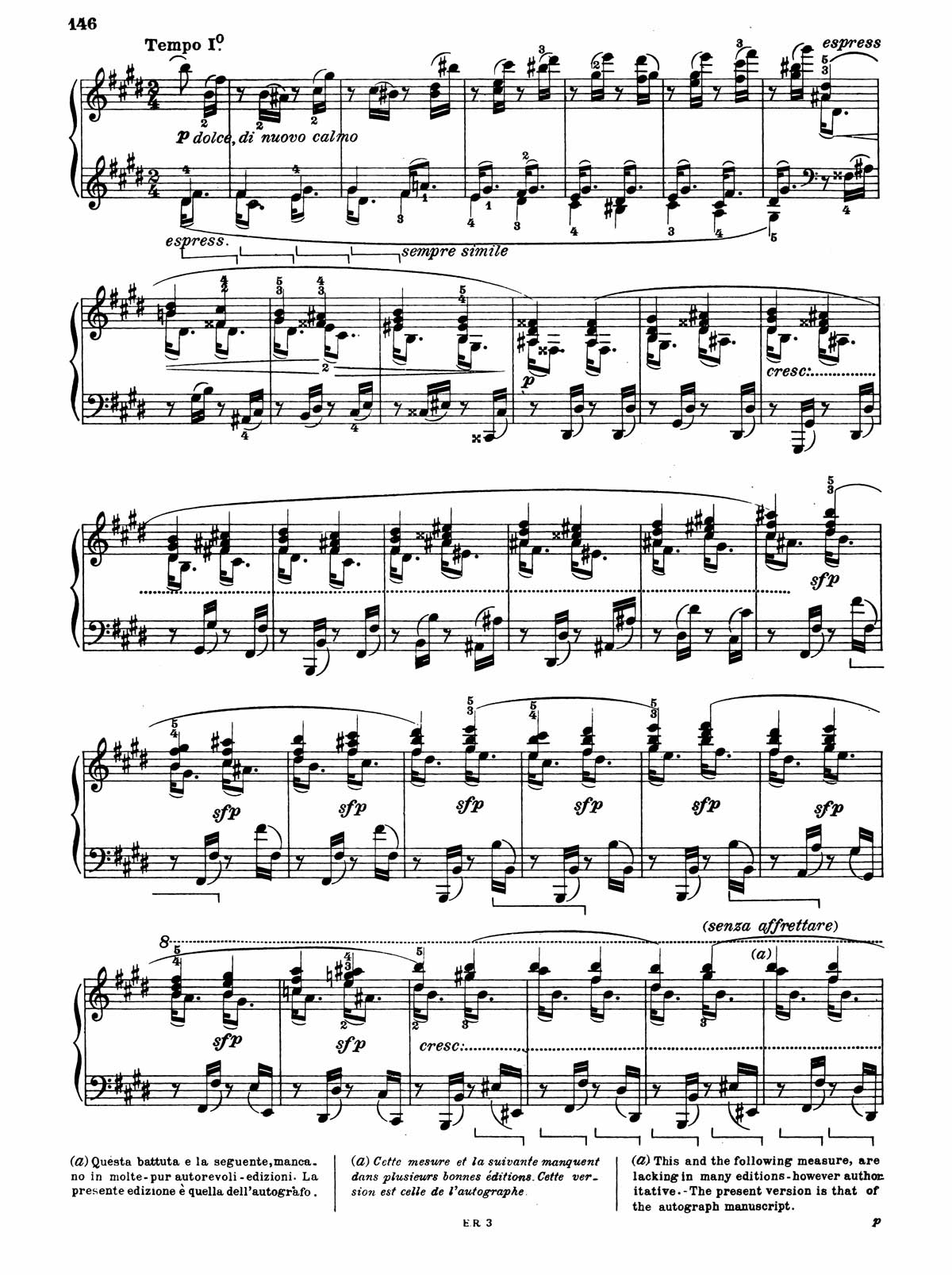 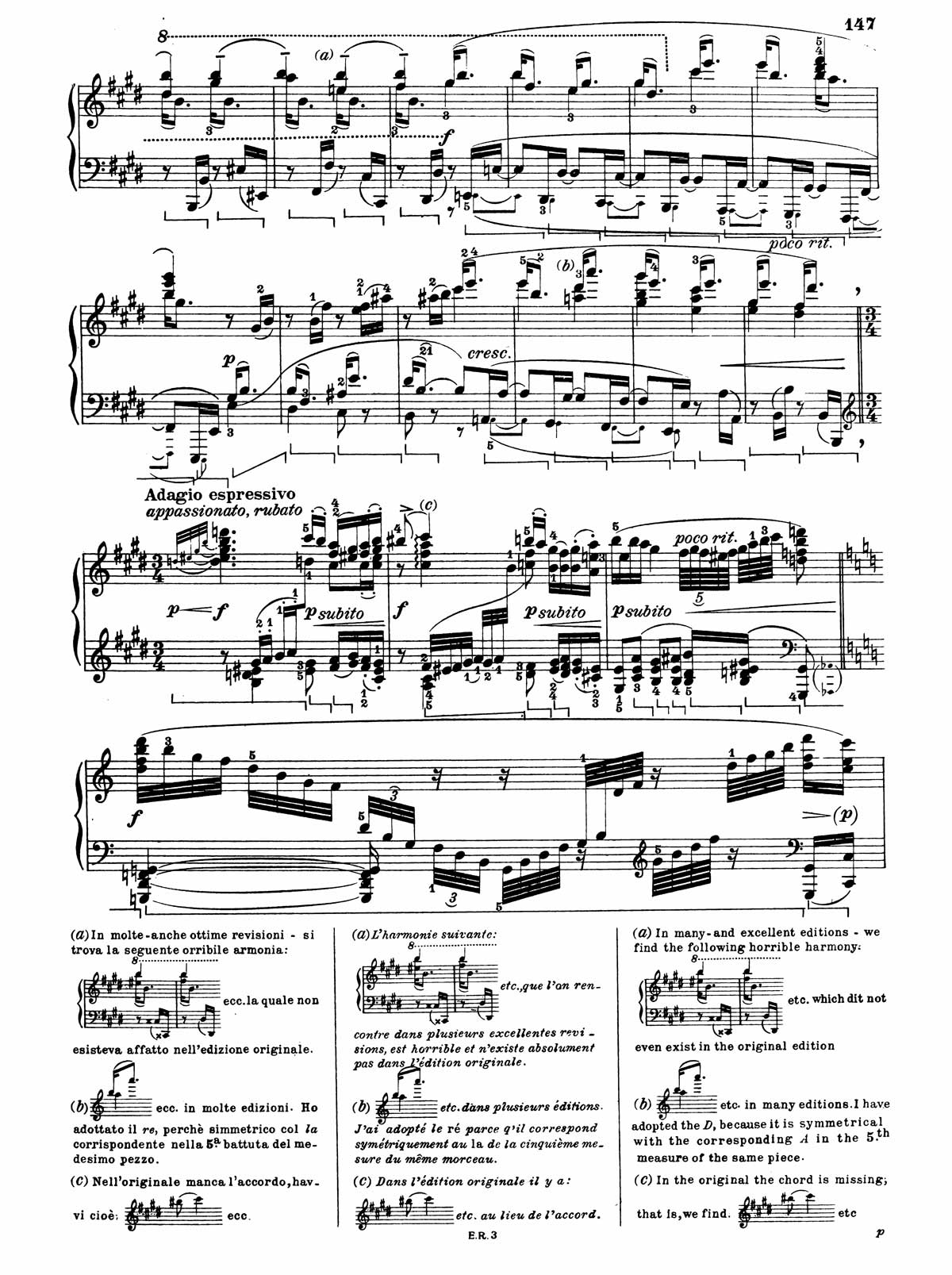 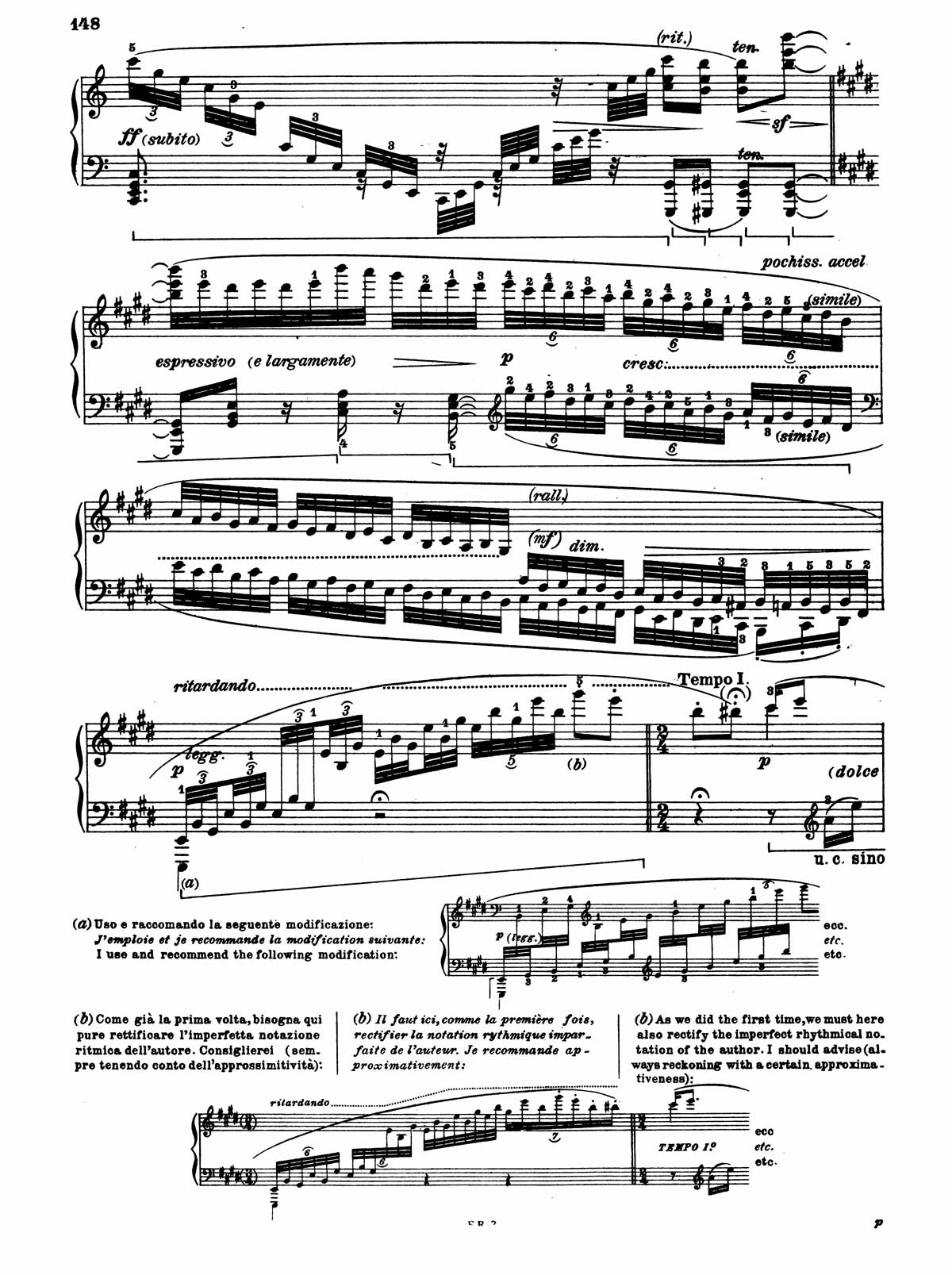 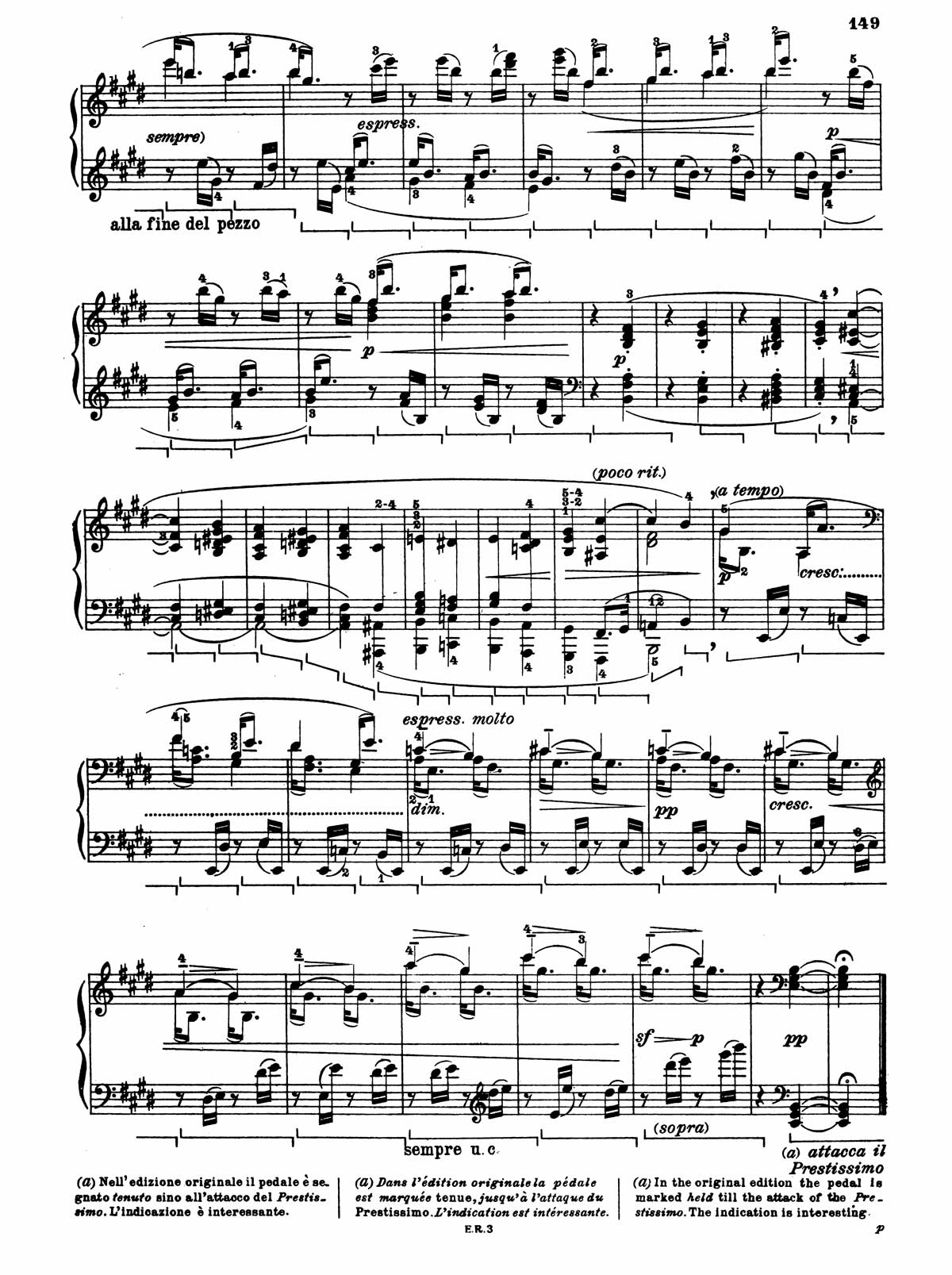 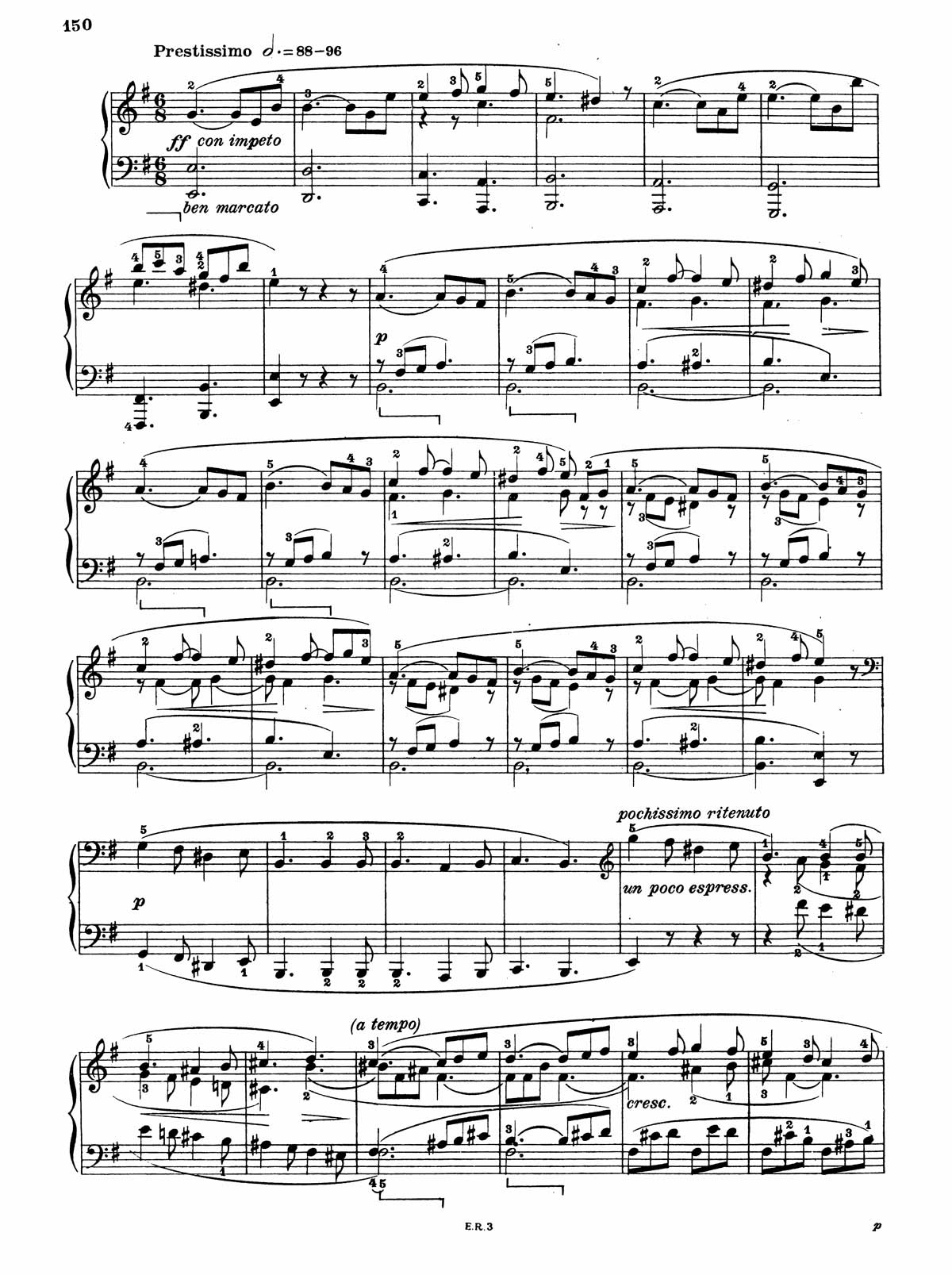 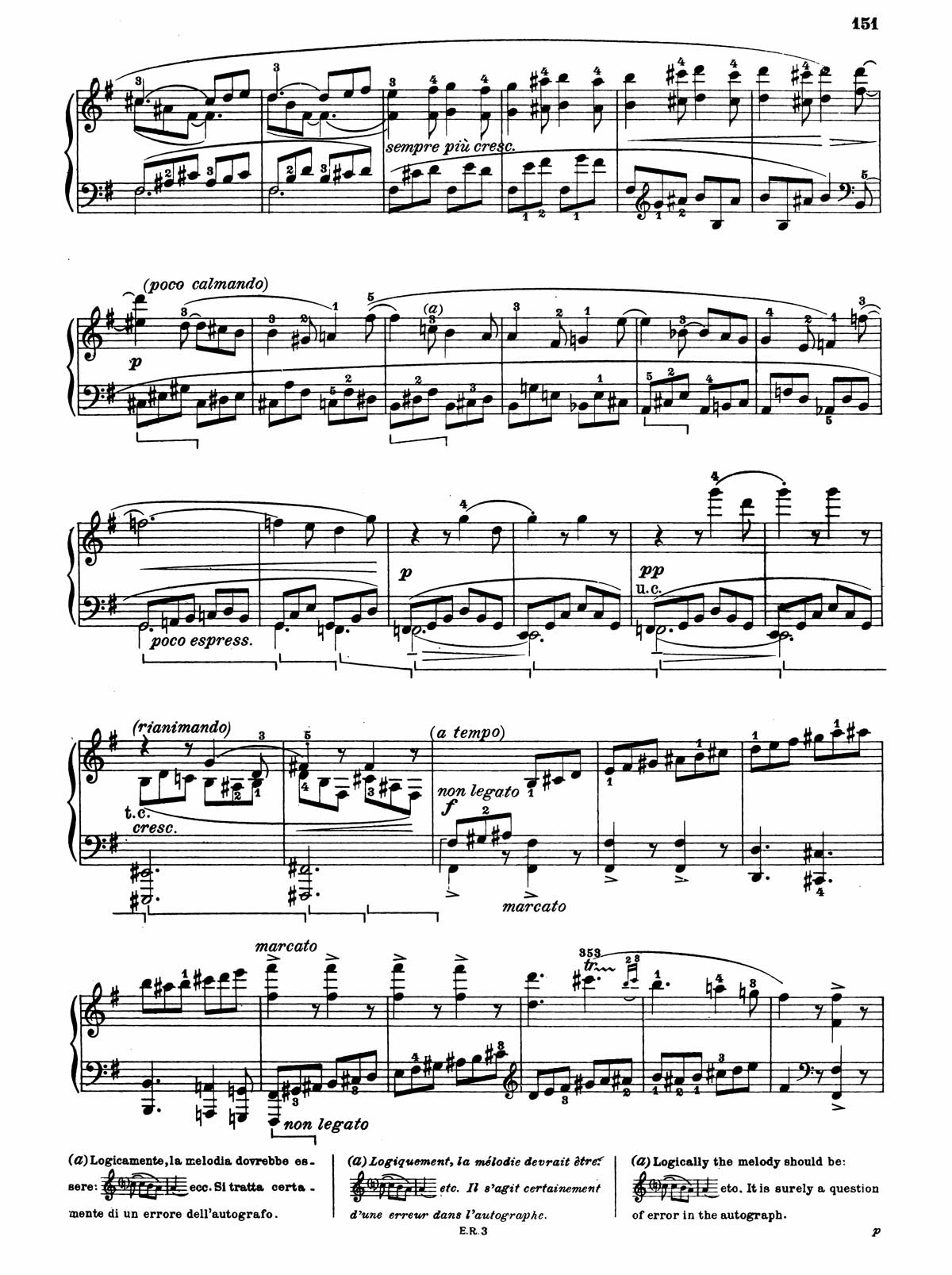 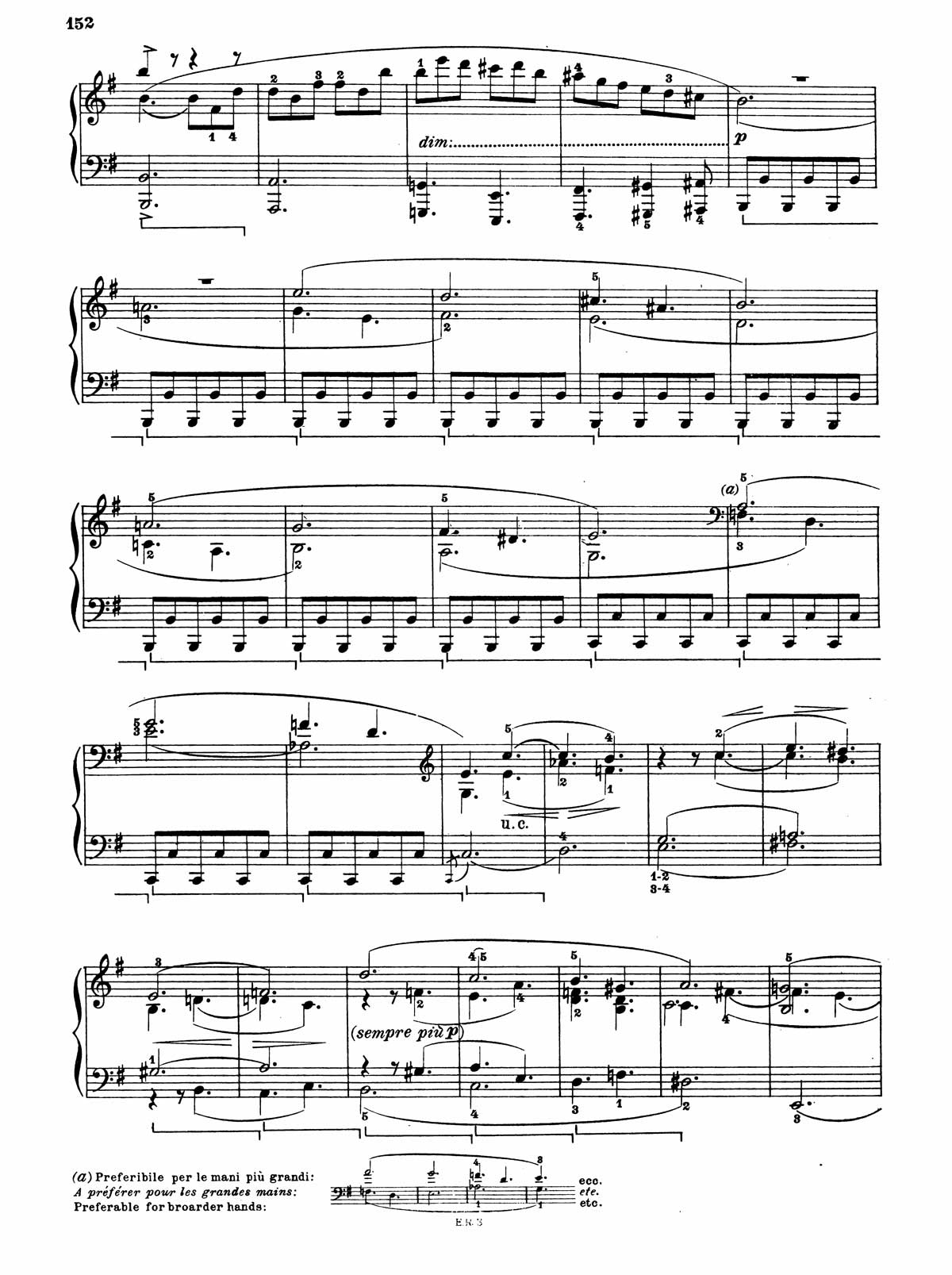 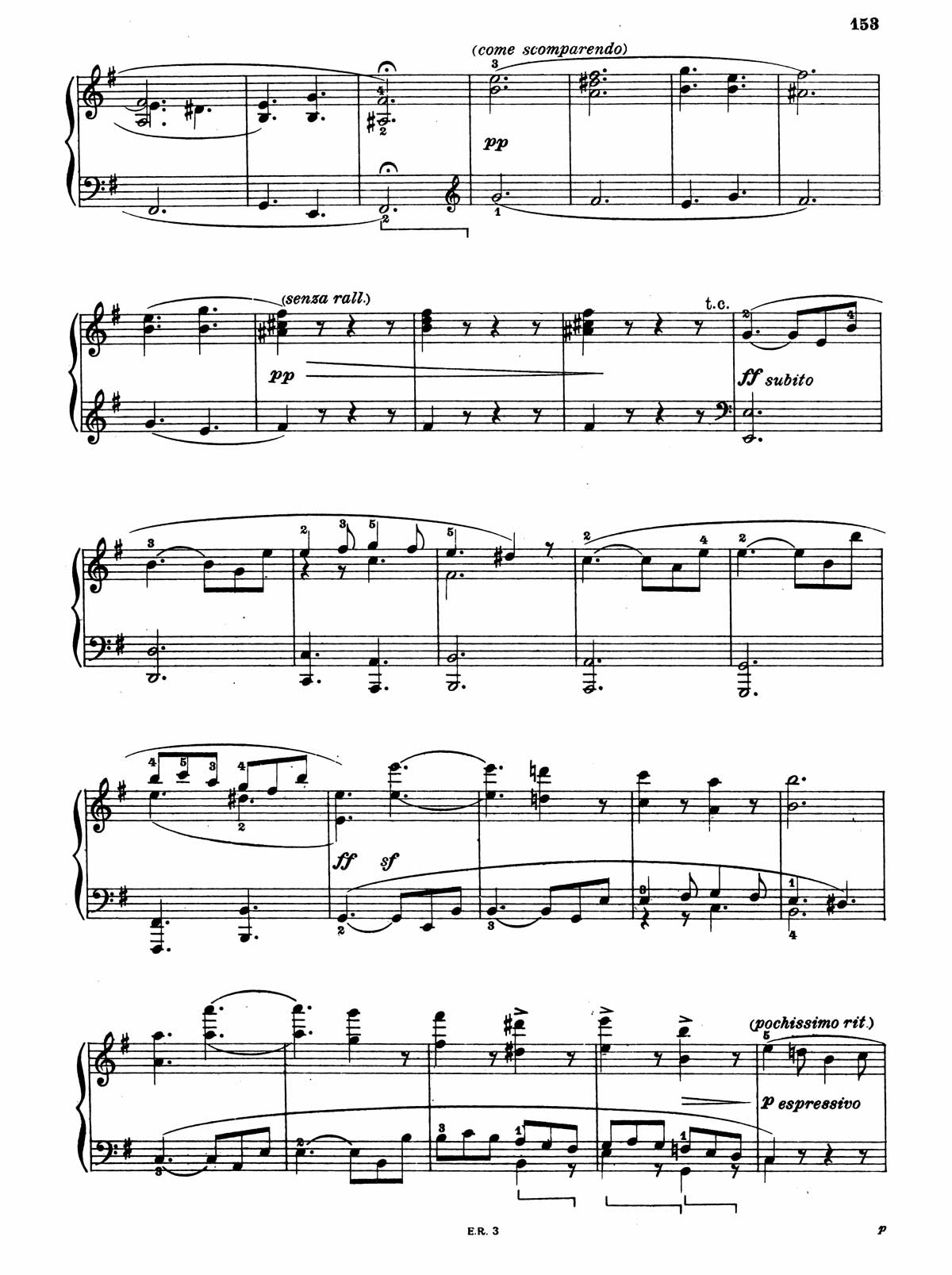 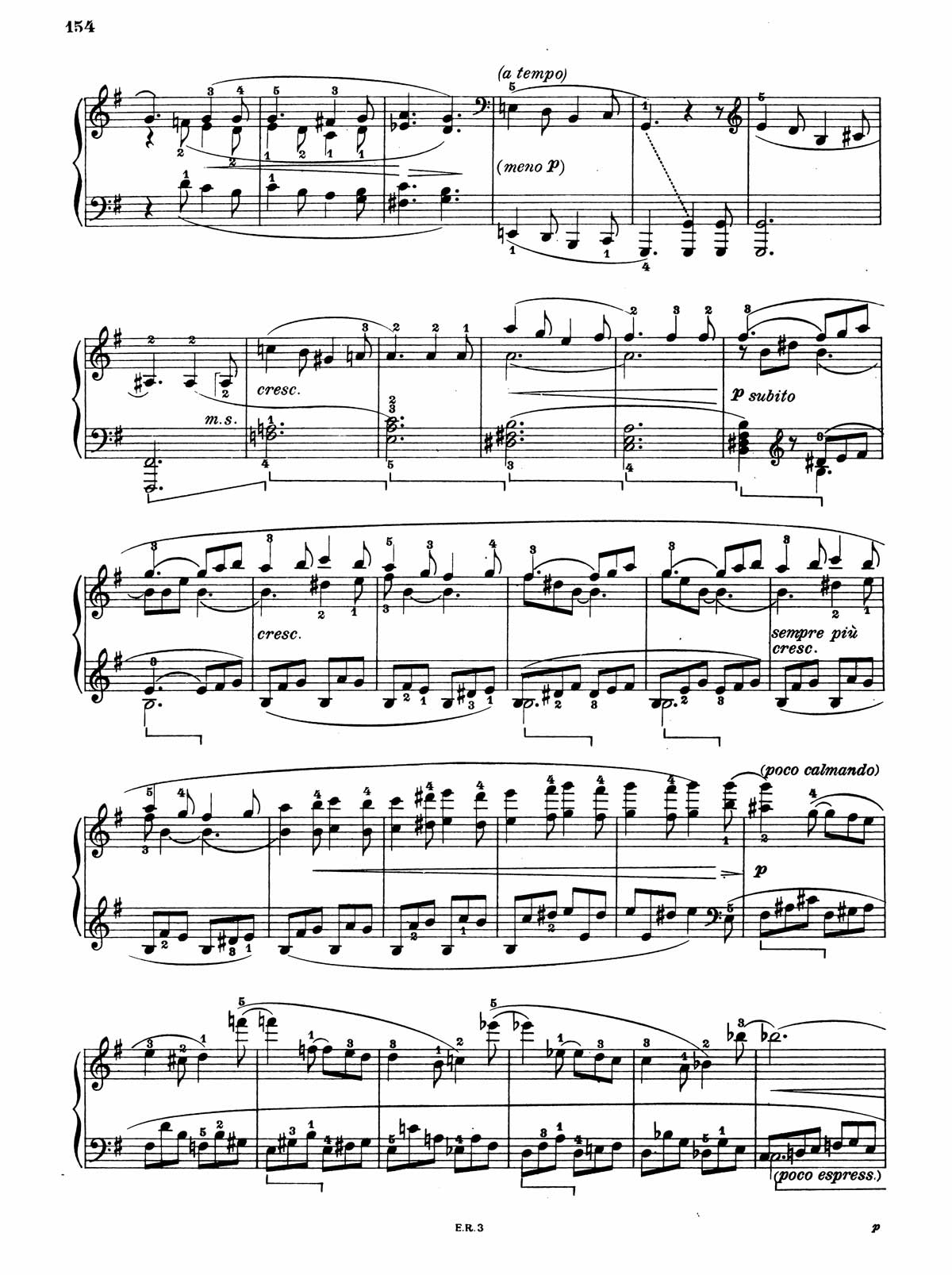 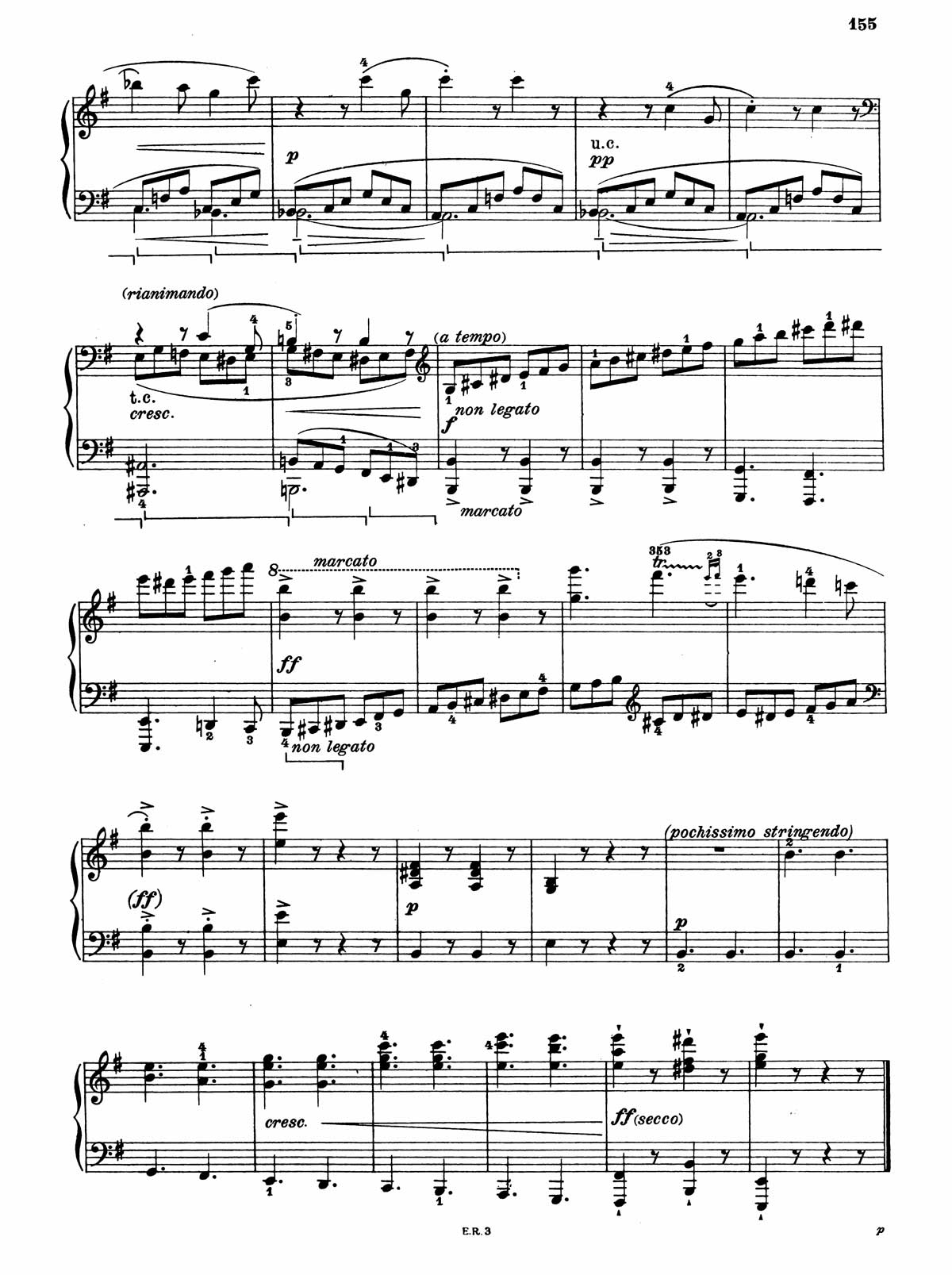 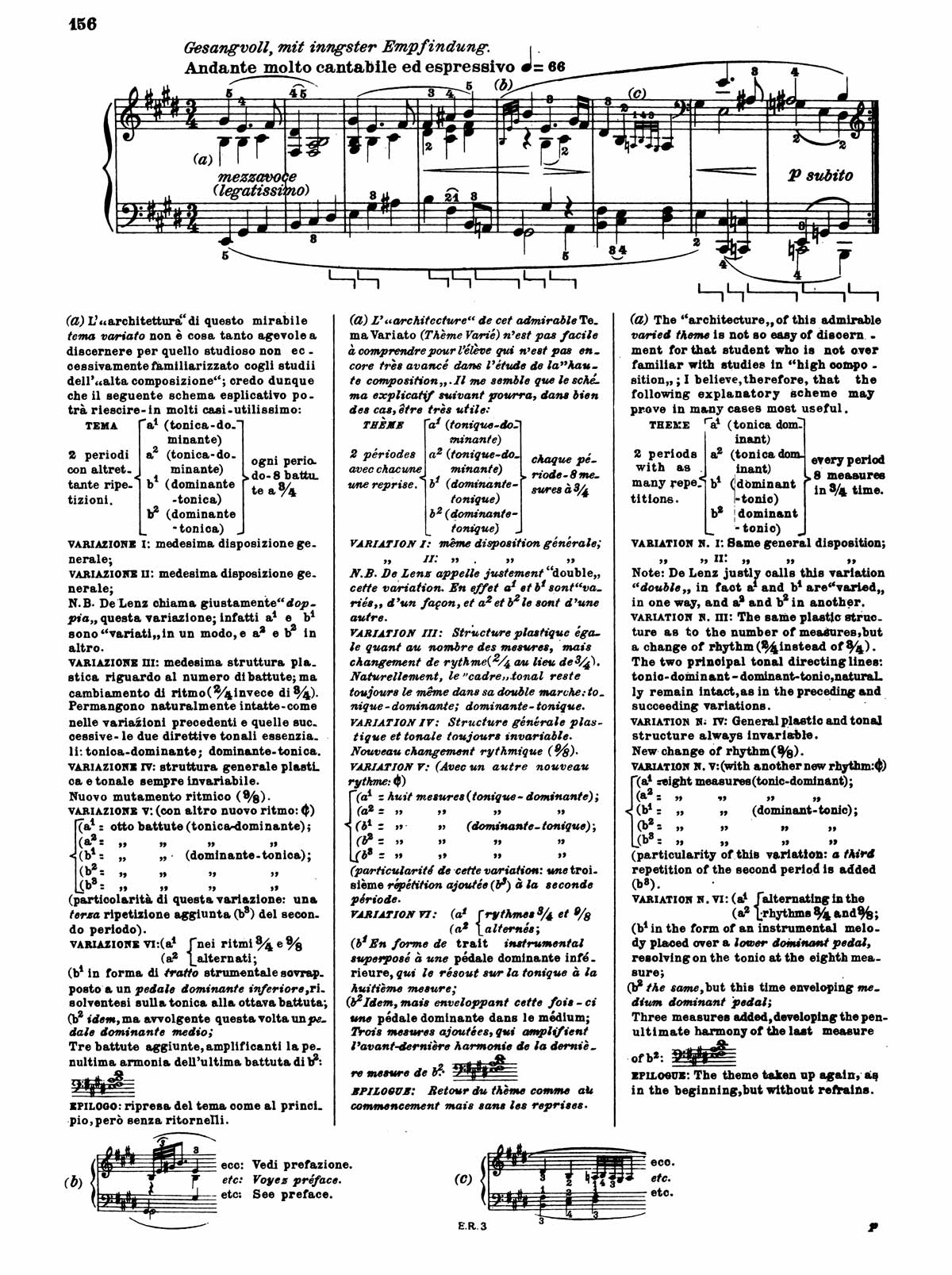 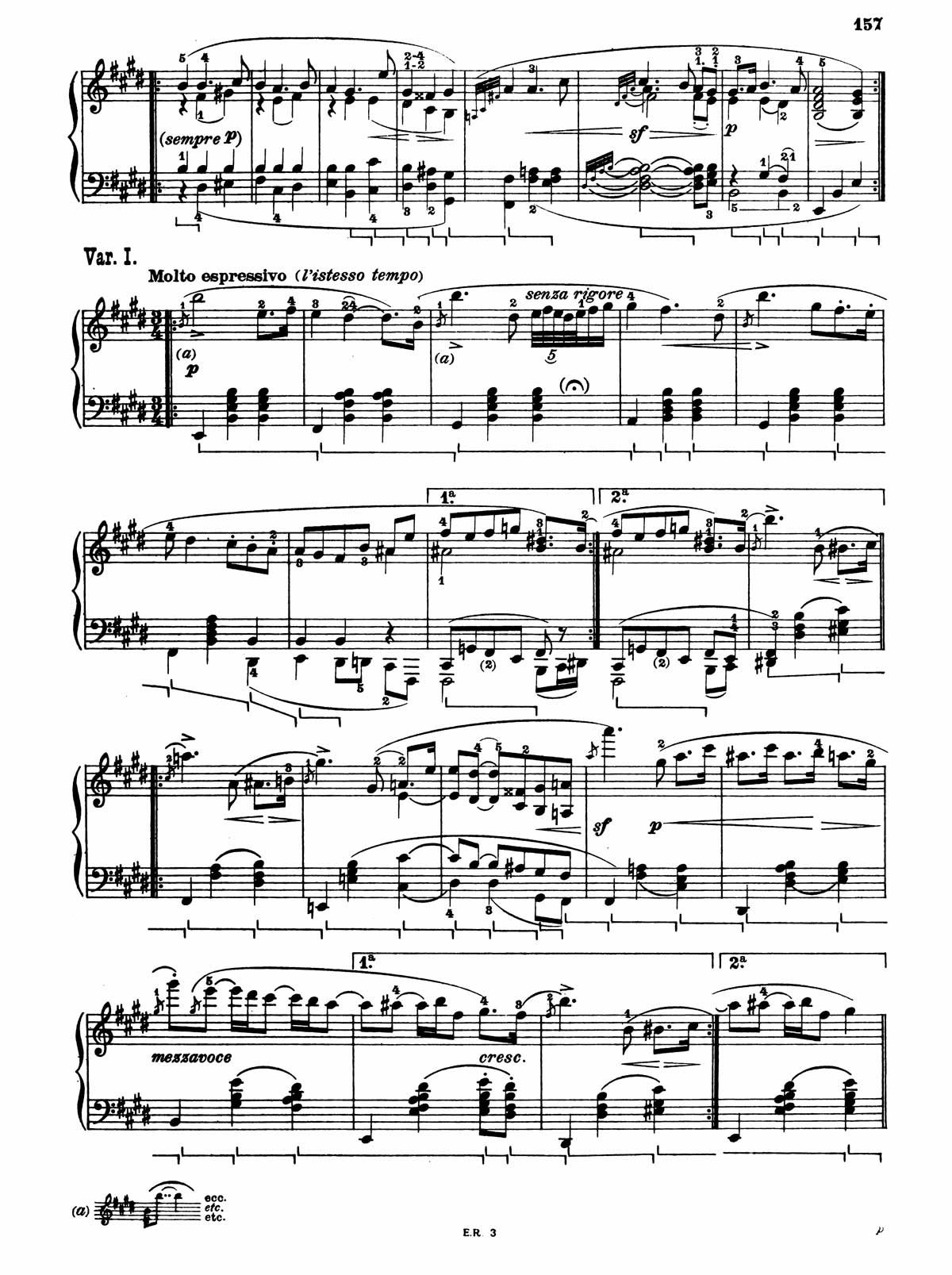 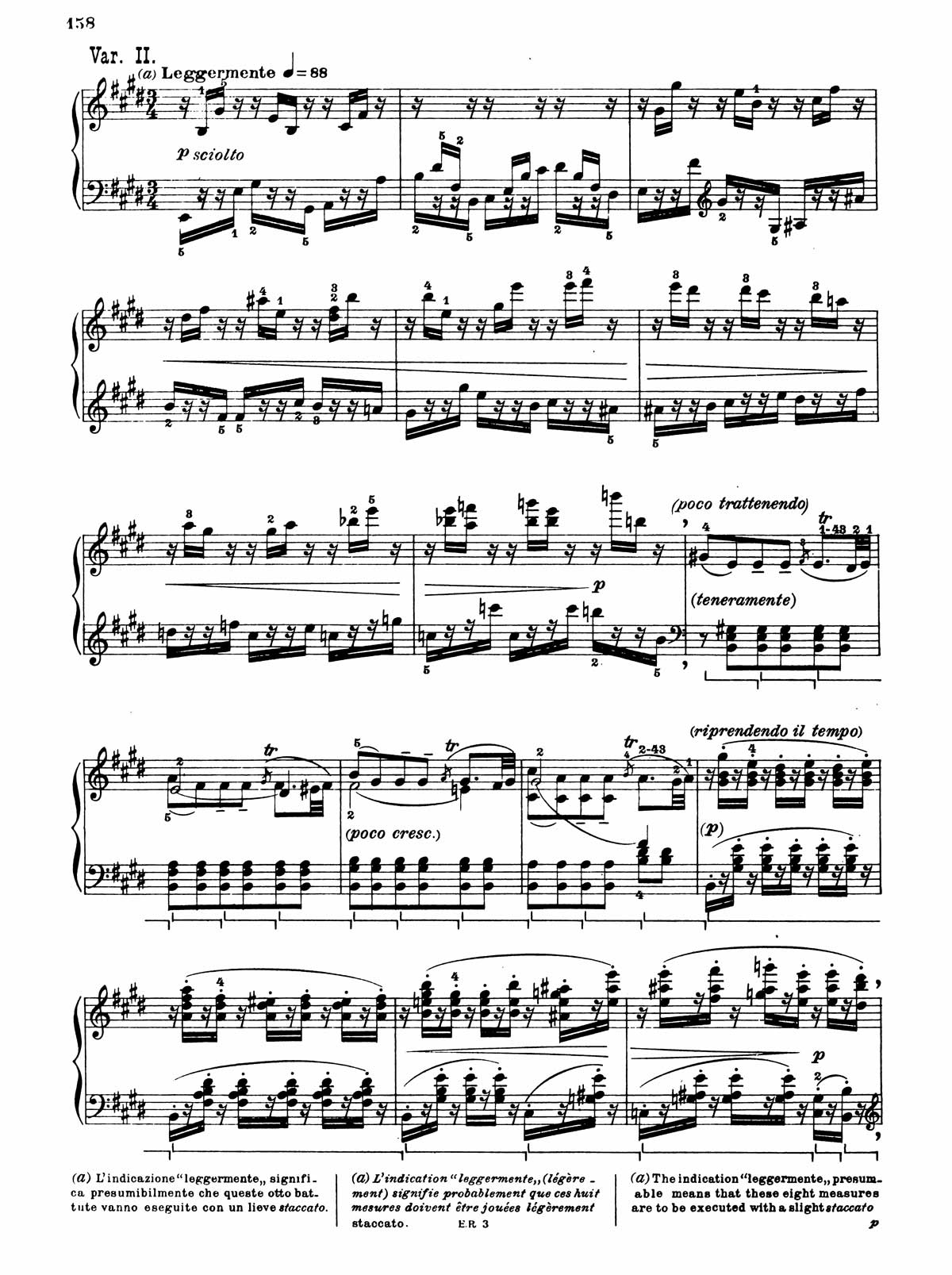 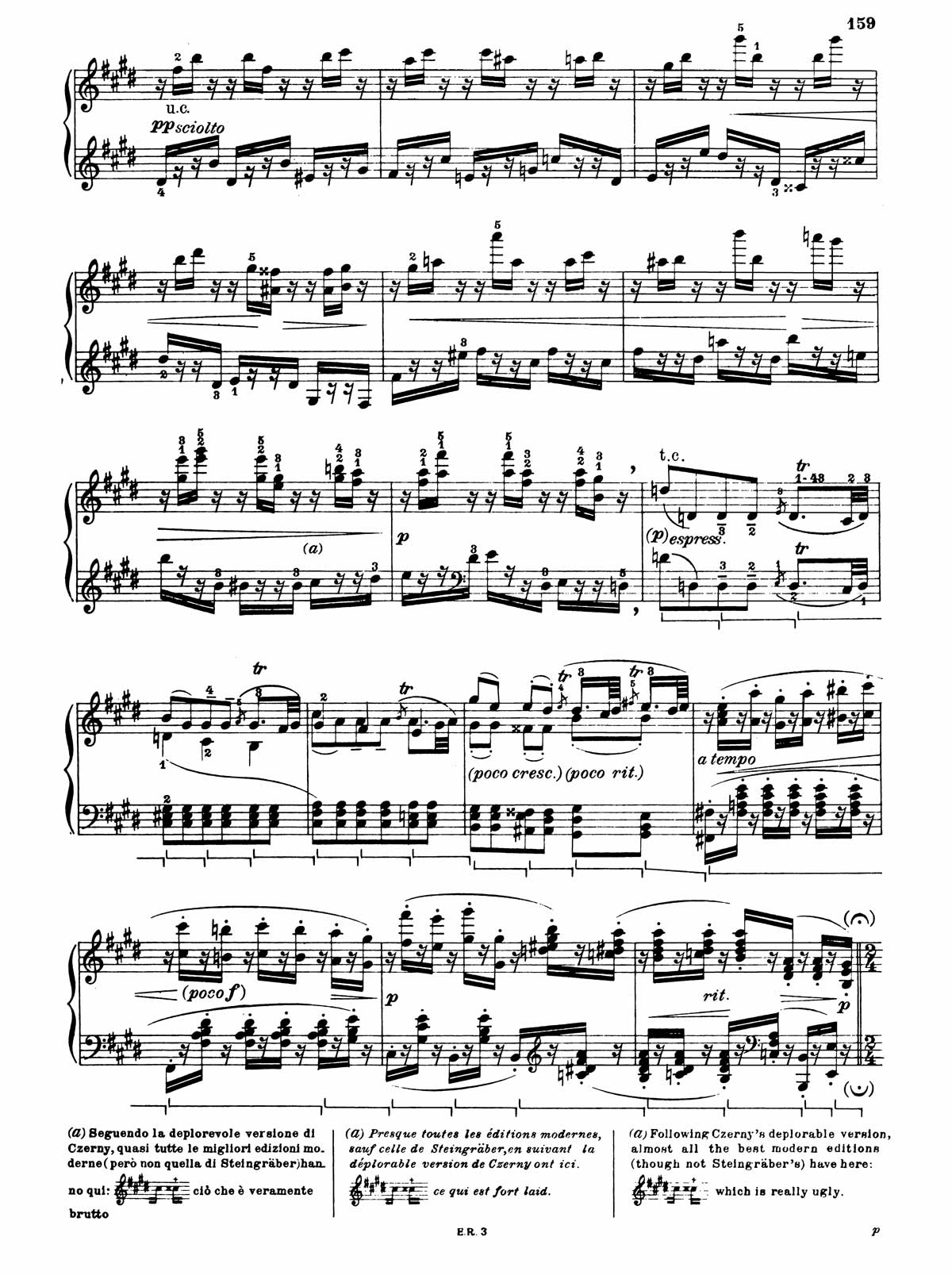 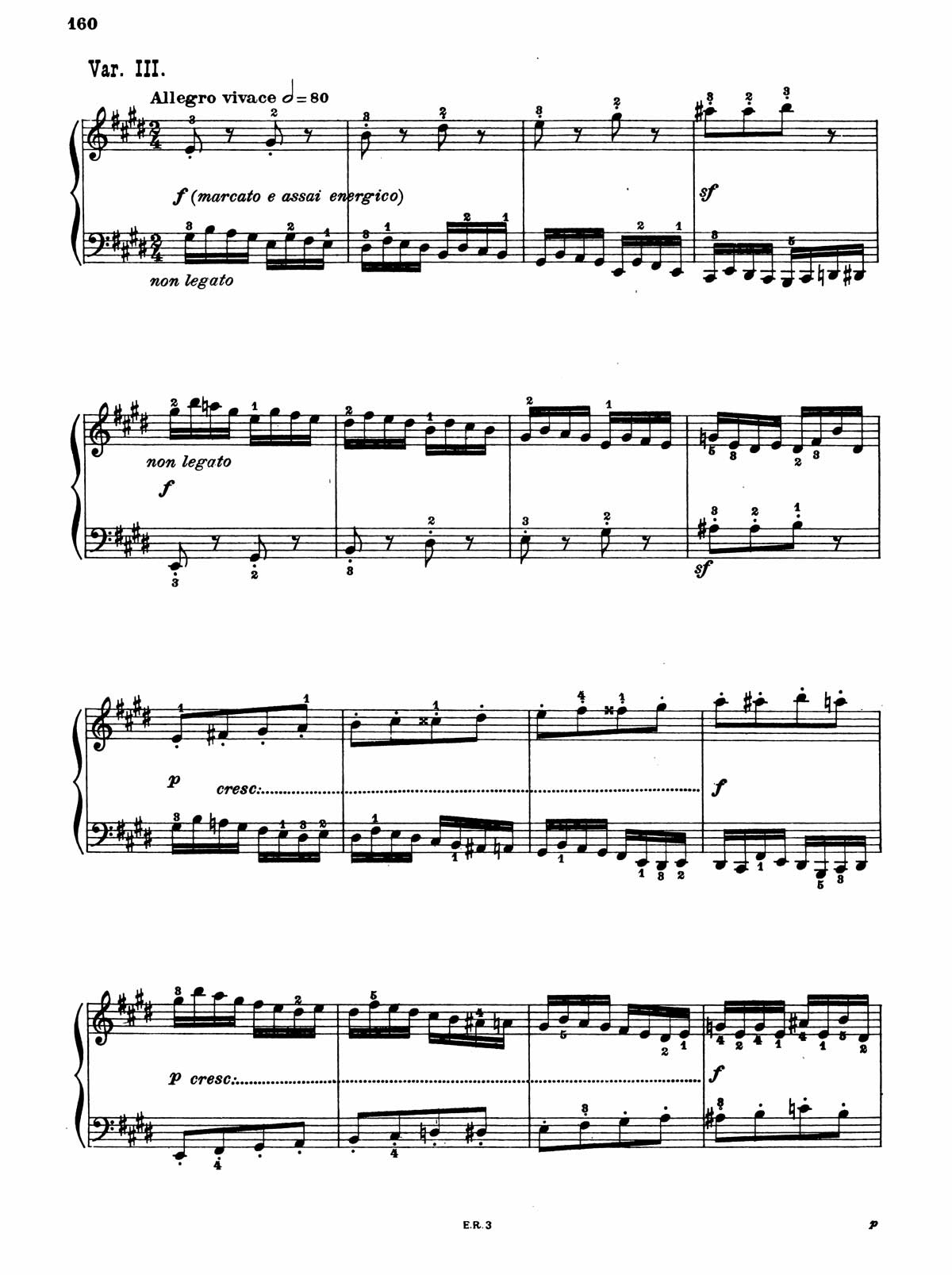 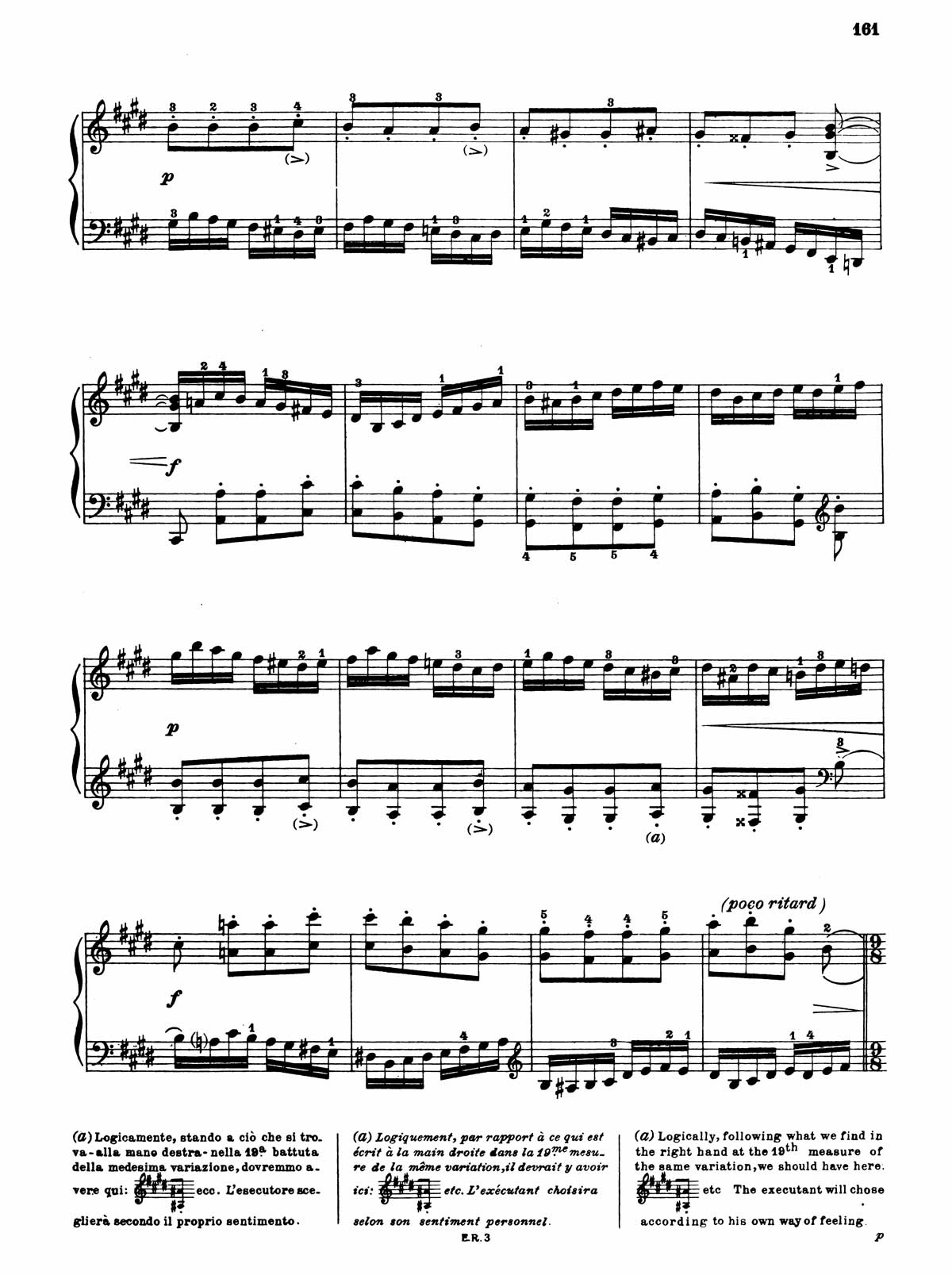 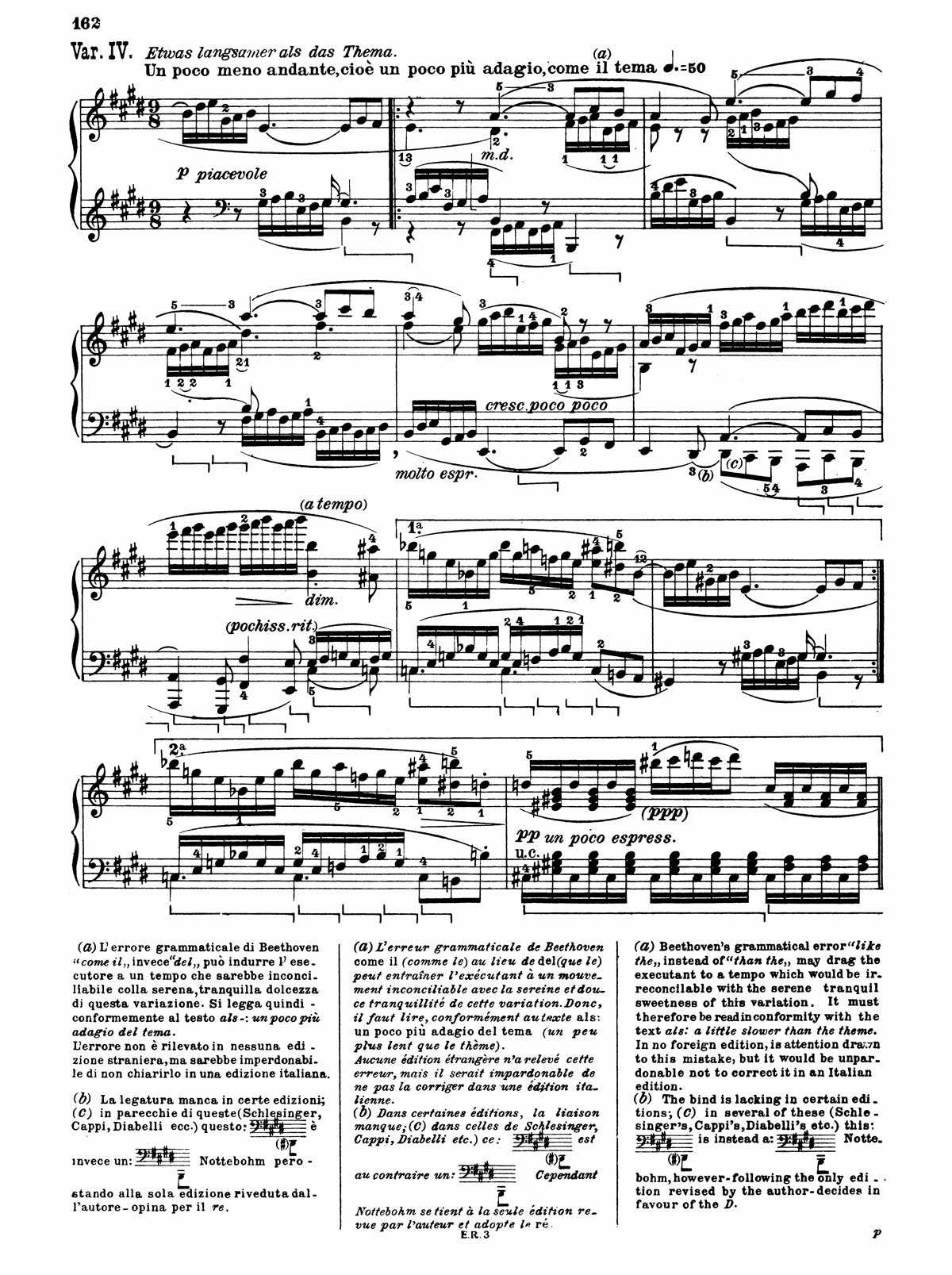 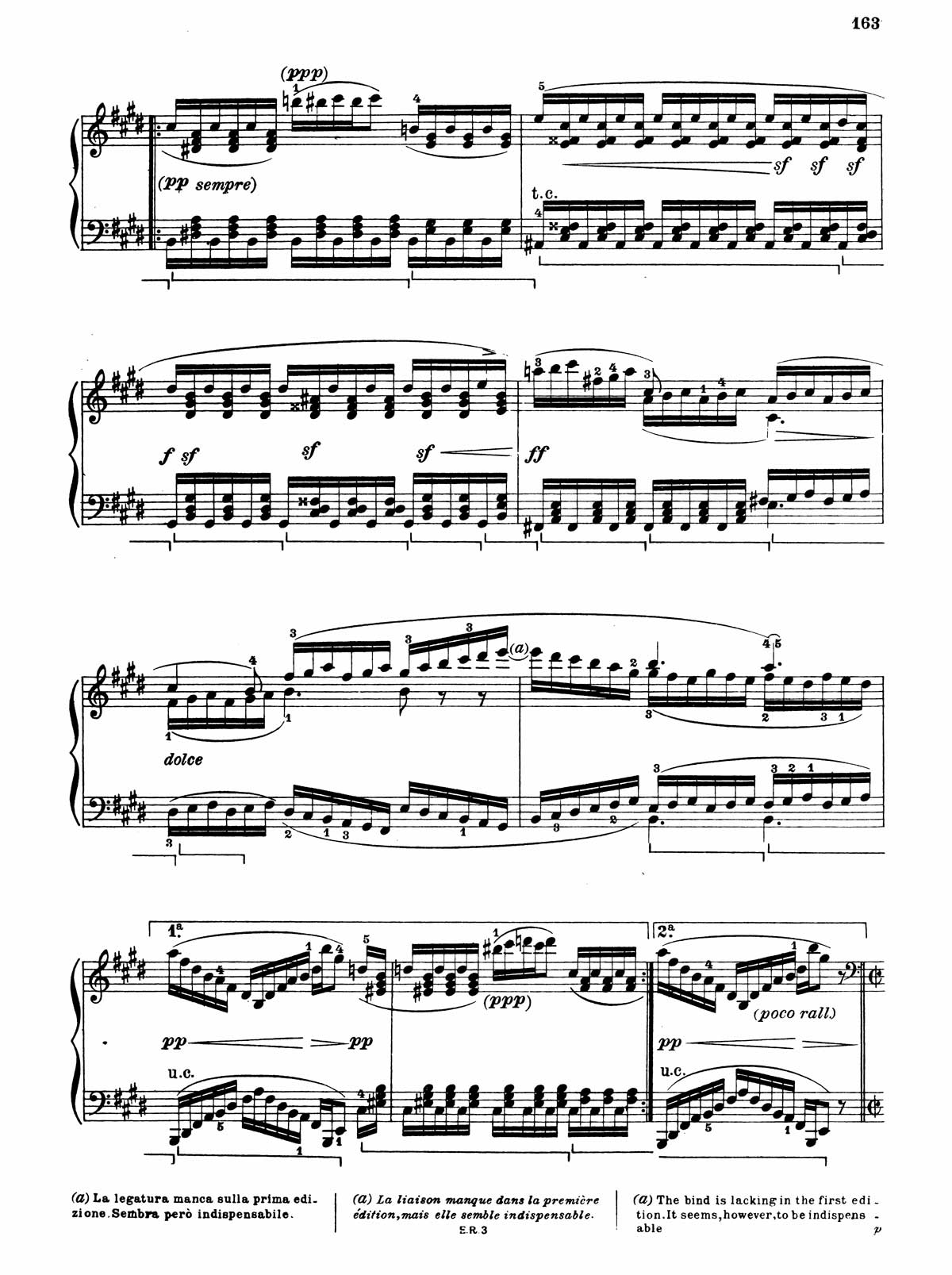 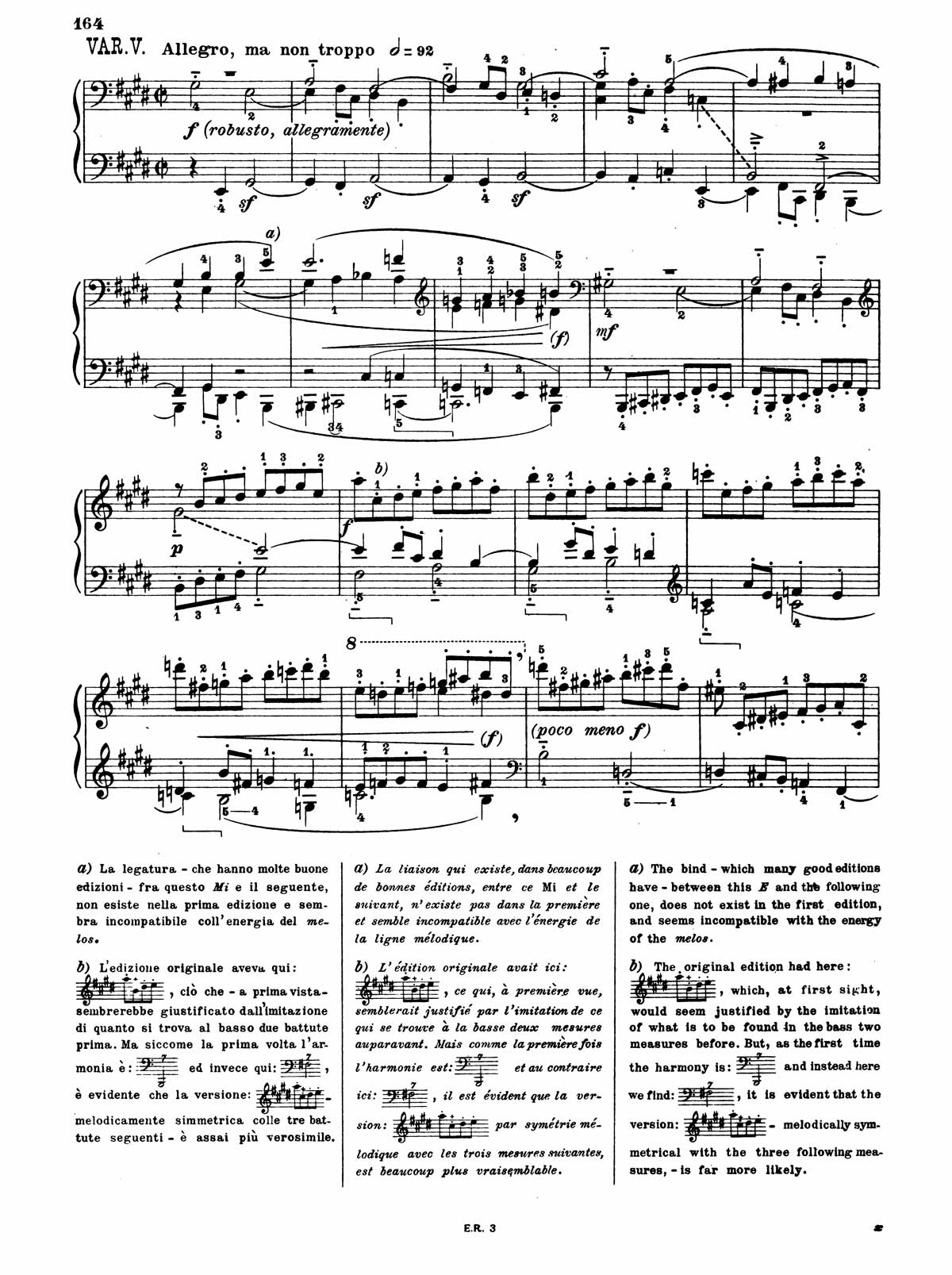 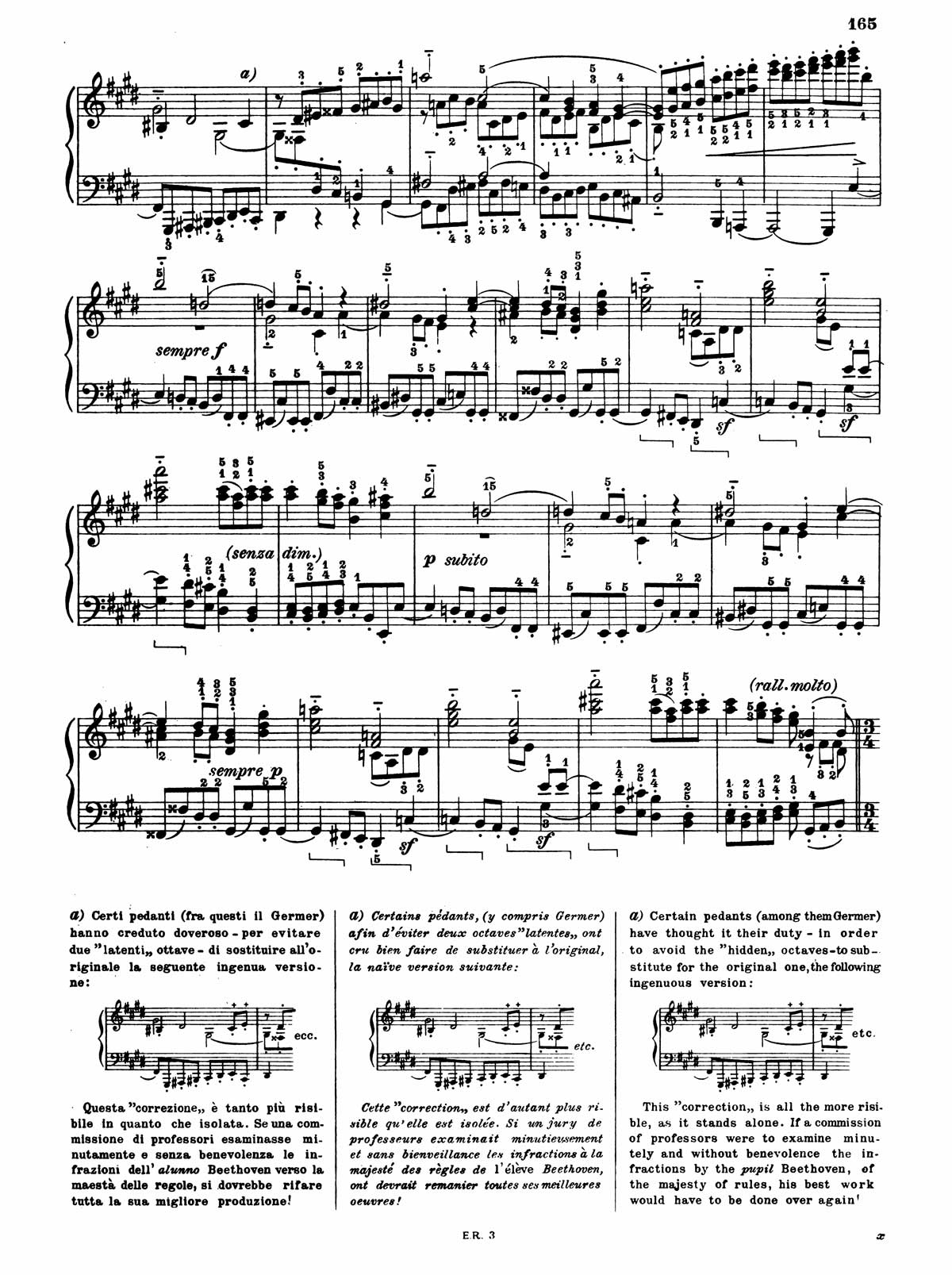 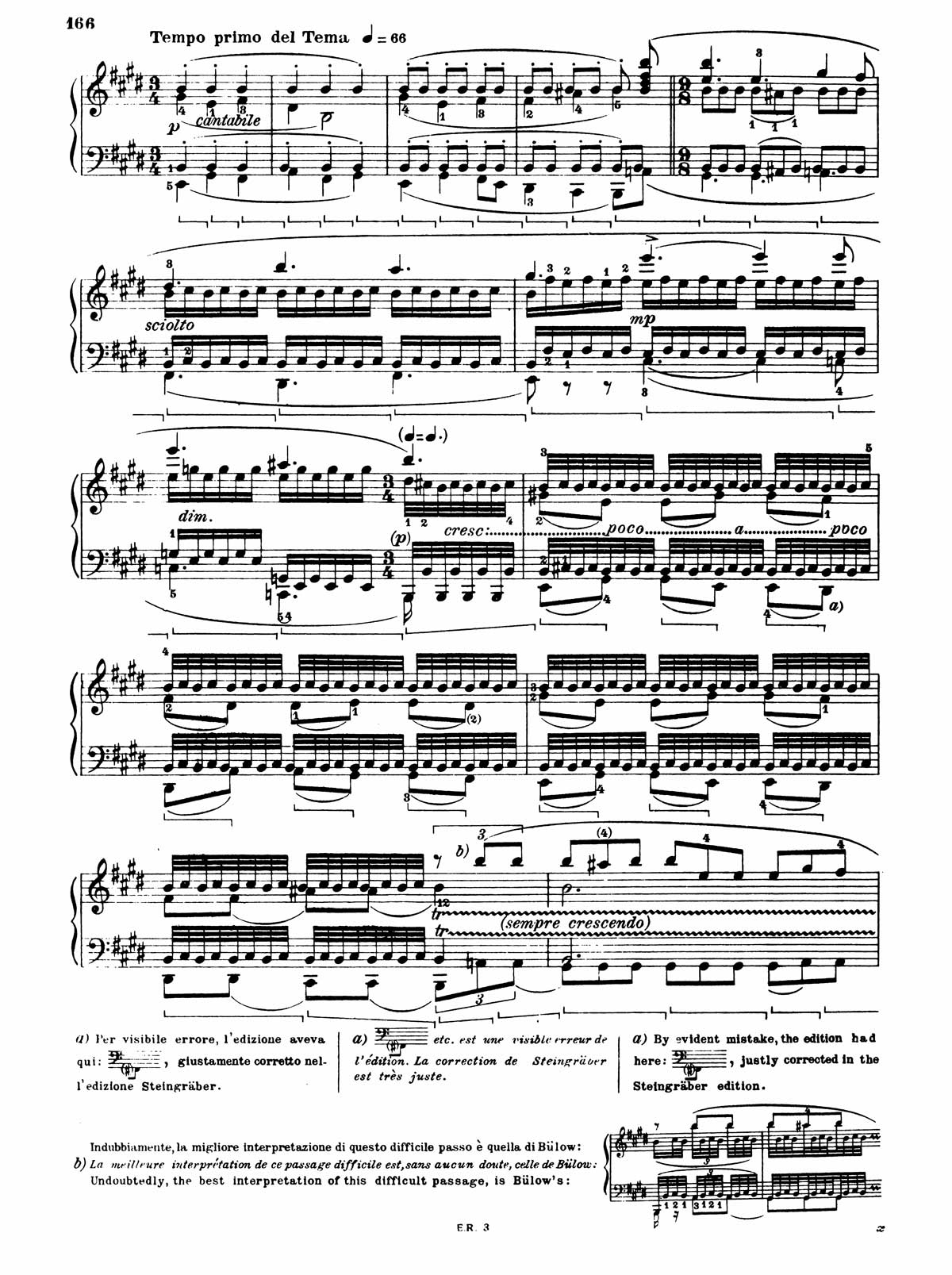 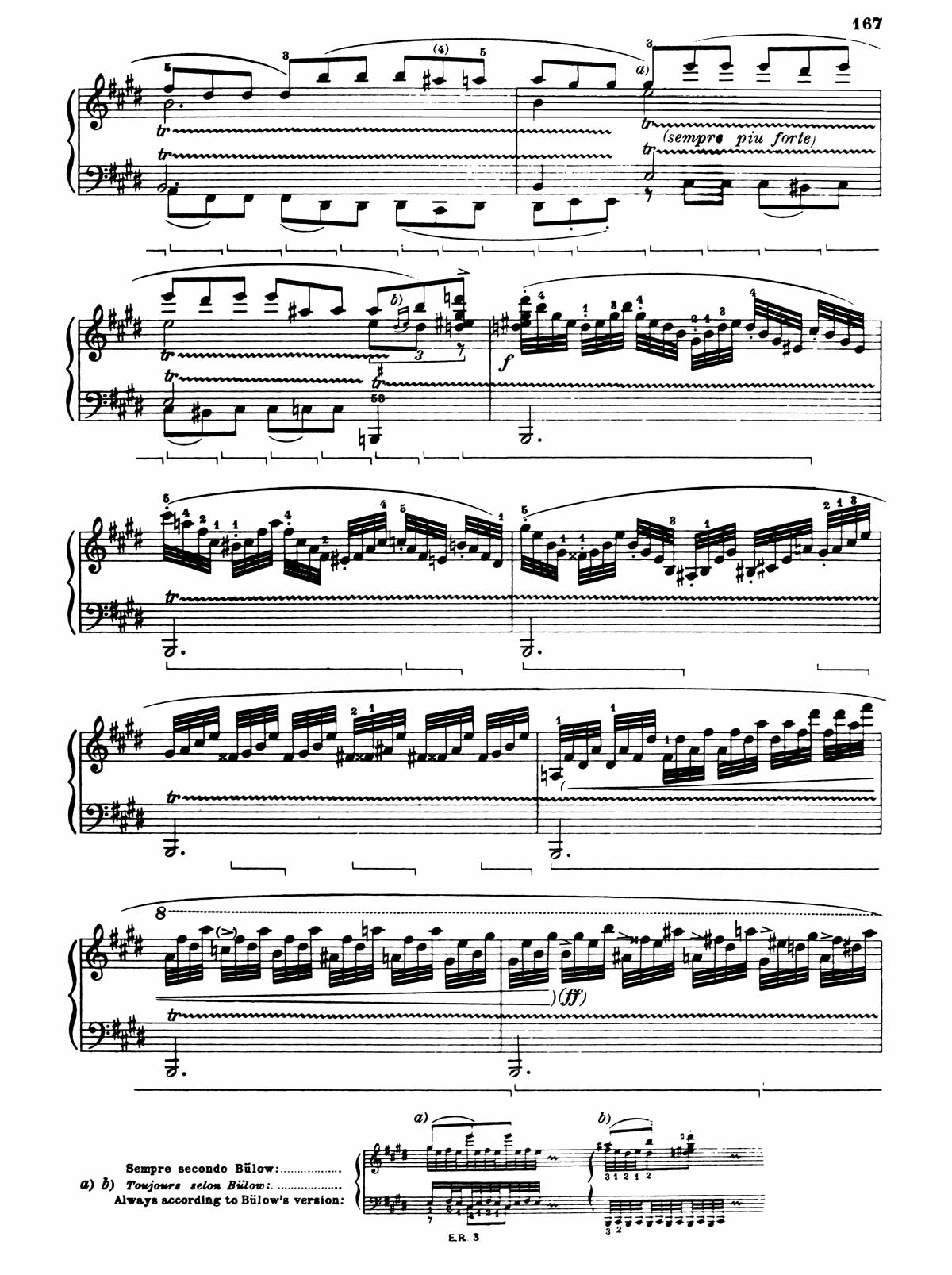 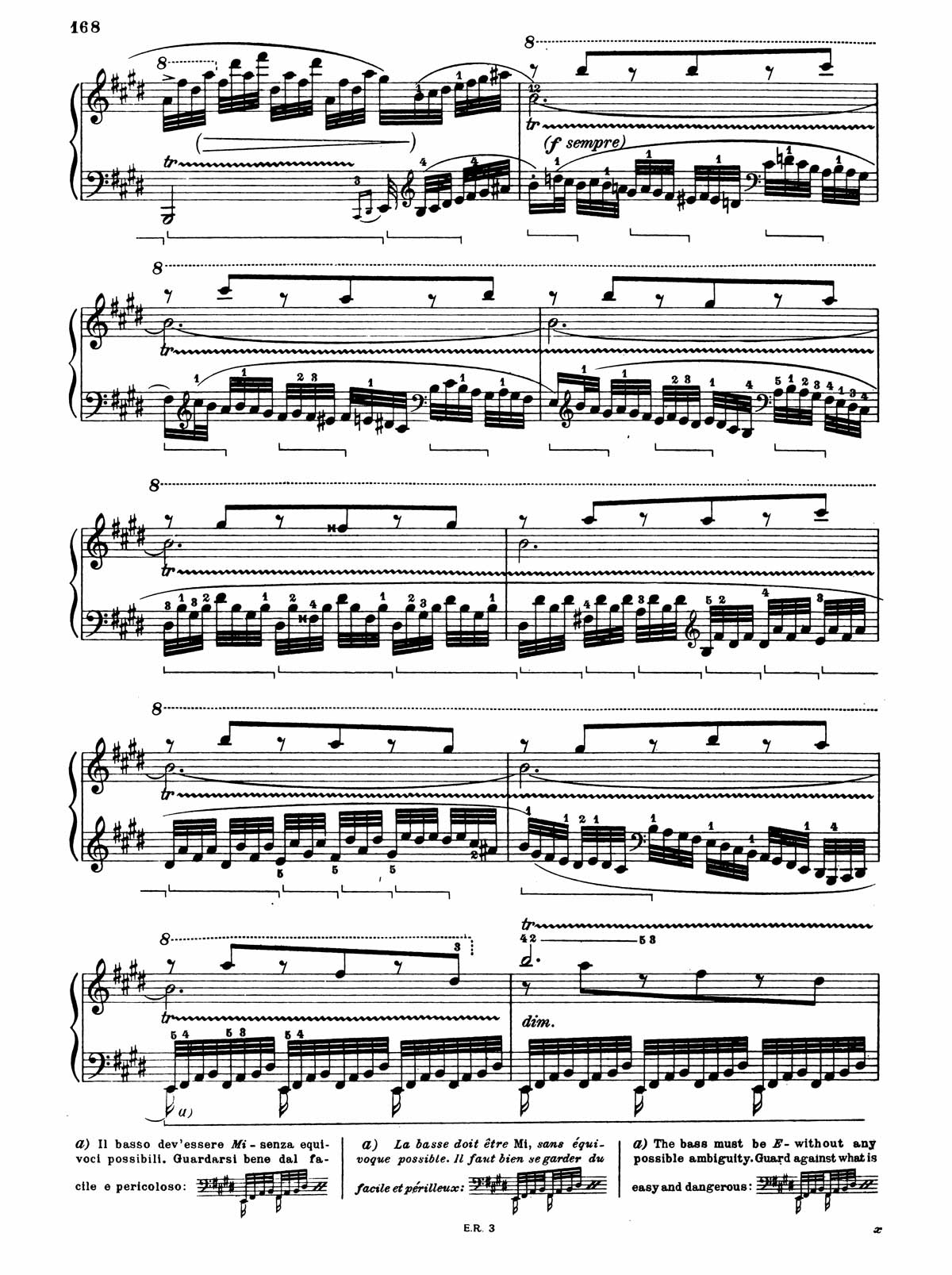 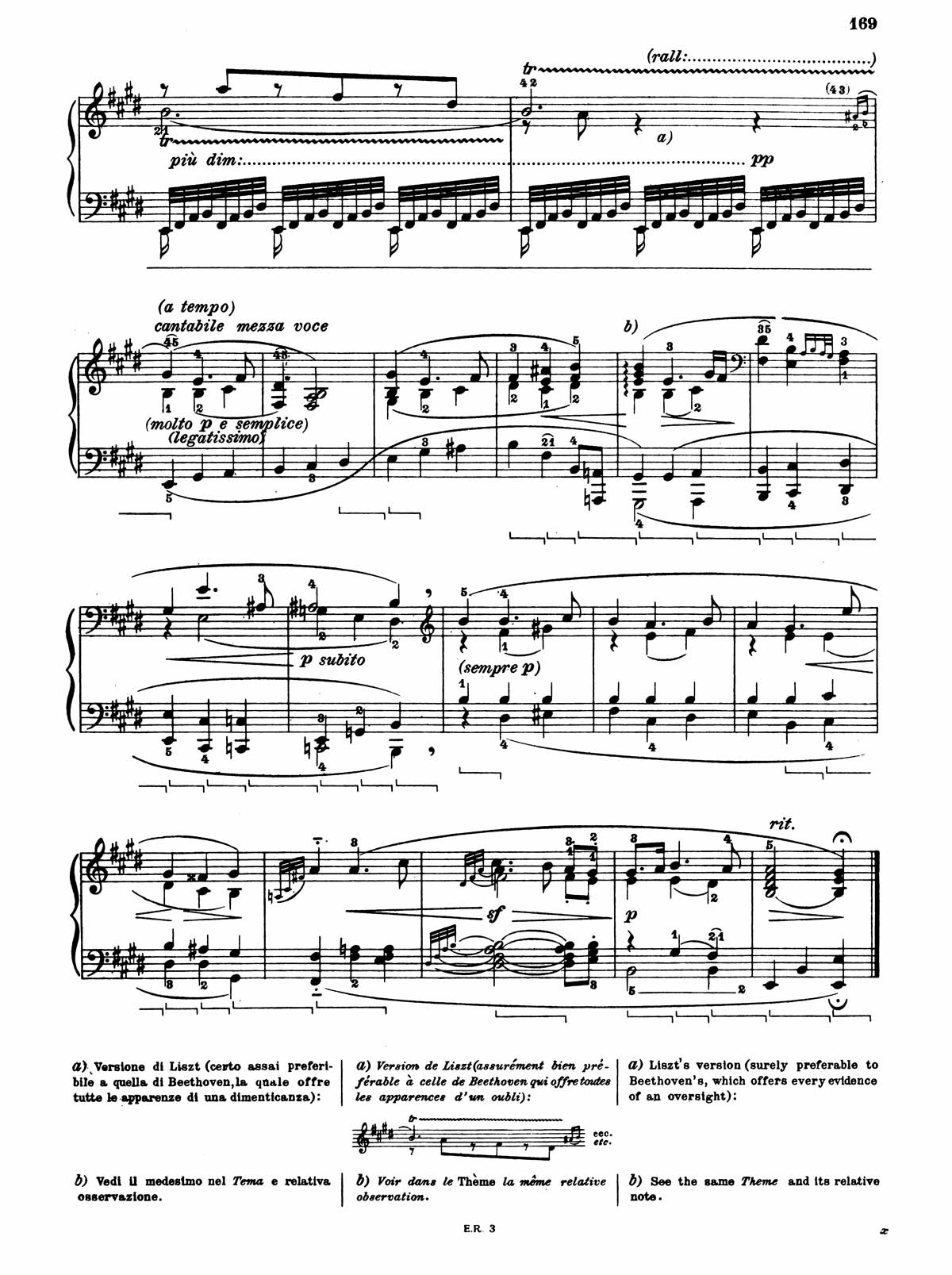 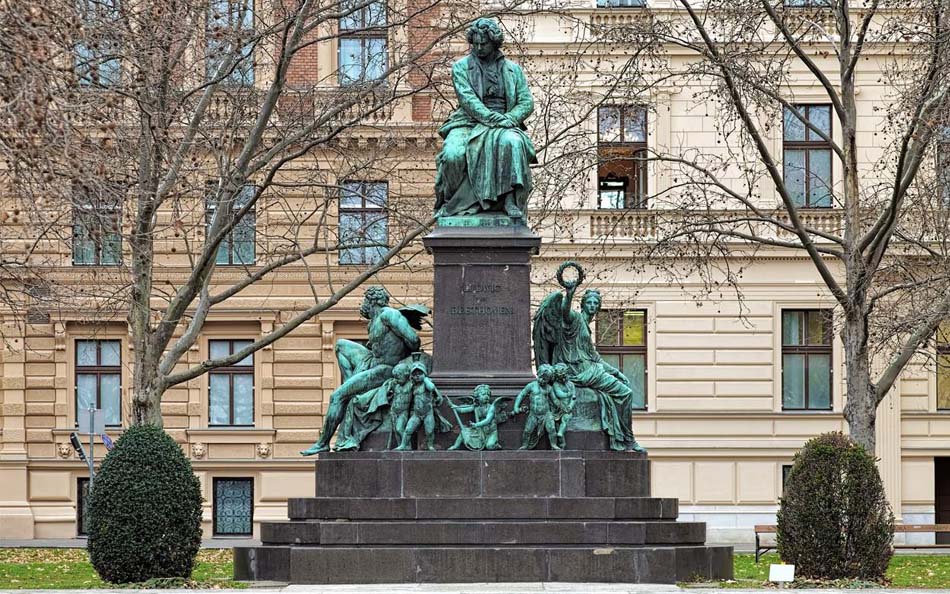 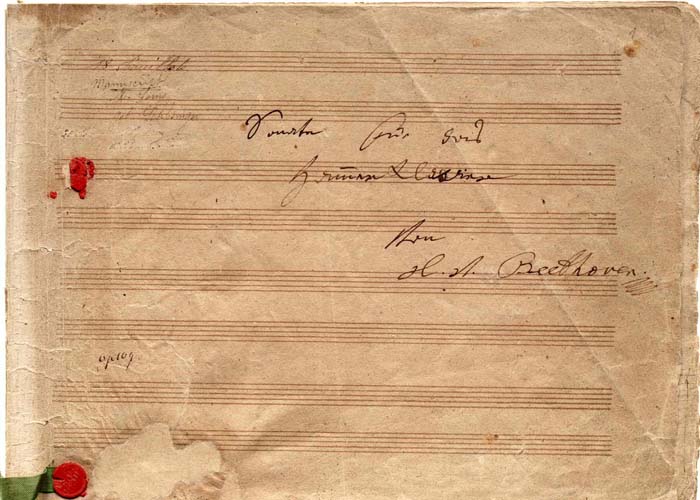 Beethoven’s 30th Sonata is to the Hammerklavier what a koan is to a novel: ultra-compressed, terse, deeply enigmatic (so enigmatic, in fact, that we can’t even decide if it’s got 2 or 3 movements). It marks a return to intimate structures after the vastness of the Hammerklavier, but despite its beauty and warmth it’s as deeply radical as anything which Beethoven wrote.

In terms of large-scale structure, Opus 109 does a couple of very interesting things. There is the fact that the first movement is extremely short, built more around contrast (the old “classical” ideal) and contains little thematic development (the new “romantic” ideal that Beethoven had done so much to build). Perhaps because of this, the second movement is also in sonata form (a scherzo without the trio is also a good read), another very unusual step. Add to this the fact that for the first time in Beethoven's sonata output the focus is now on the last movement (instead of the first, which is the norm), which is considerably longer than both, the first and the second together. This pattern, of having a slow and wide Final Movement that ends the piece with a kind of devotional intensity, is repeated in the two sonatas that follow Opus 109.

The relationship between the first and the second movement is also quite interesting; They function as a combined counterweight for the third movement. They are bound together (not by an indication of attaca, which is unusual) by the thinnest tissue: the pedal grip. The two main (opening) themes of both movements are also very similar; the bottoms of both are built around a simple descending scale.

The sonata as a whole is also unified by the motivic interval of a third. The first theme of the first movement has a main melody (highlighted as quarter notes) that basically consists of even thirds (G # -B, F # -A, EG #), just like the first theme of the second (the right hand basically goes GE, BG, EG). The theme of the third movement opens with a third, which is repeated throughout the variations. In Var.2, the notes 2 and 3 in the right hand are separated by a third, and the pattern repeats (F # -D #, then G # -E, F # -D #, F # -A #) . In the Var. 3, the pattern is obvious: both the right and the left move outward in the third. In Var.4, the rhythmically important notes are also separated by thirds (for the most part: B-G # -E in the opening phrase, for example). In Var.5, the theme of the fugue closely resembles the main opening melody of the sonata, and so on.

The last thing to note: the last movement, a theme and variations (unusual ending to a sonata), contains much of Beethoven's most beautiful writing. In fact, the 3 most lyrically intense, static, generous 1-minute music segments that Beethoven has ever written are probably found in the last movements of his last three sonatas (the closing chorale of the 31 and the brief moment in the 32 when the theme and variation form is dropped).